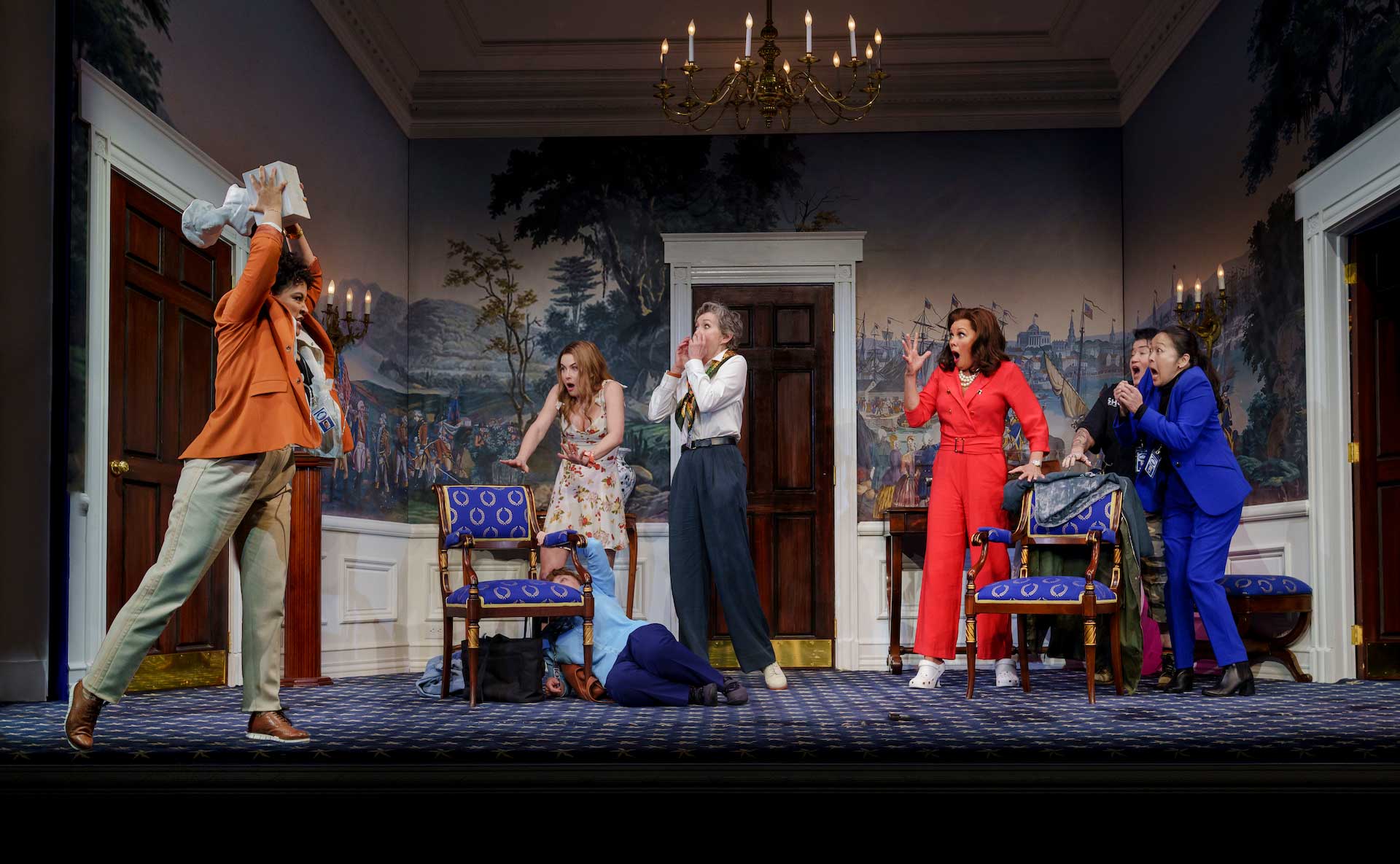 POTUS, or Behind Every Great Dumbass Are Seven Women Trying to Keep Him Alive is a rare thing on Broadway — a new play by a 27-year-old newcomer, Selina Fillinger, that opened without any major out of town try-outs or workshops. You'd never know it from the well-oiled laugh riot that officially opened on May 1.

It's The Women meets House of Cards, a spot-on feminist spearing of political posturing, arrogant men, and the women who keep things running behind the scenes. The ensemble cast boasts a murderer's row of talent, and it's nearly impossible to choose performances to single out here.

But Julianne Hough is particularly mesmerizing, transforming the role of a blonde ditzy mistress into a wry, winking figure with unexpected depths. She walks the tightrope of vapid floozy and perceptive, sex positive goddess with a nimbleness that defies expectations. After endearing herself to audiences on Dancing With the Stars, she made a run at movie stardom as a fresh-faced ingenue in projects such as Rock of Ages and a remake of Footloose. Nothing quite took, but it's obvious here that she simply needed the right material (and perhaps the guiding hand of legendary director Susan Stroman) to come into her own. Dusty could easily be a mere stereotype, but she surprises at every turn.

Stroman and Fillinger wisely ease the audiences into these characters by kicking things off with two and three person scenes, before expanding into action that makes room for the entire ensemble, barely giving any of these women a moment to breath. Stroman, herself a musical theater veteran, wisely ties it all up with musical numbers that showcase just how incomparable this cast really is.

The women in Fillinger's play are messy, chaotic, crude, and morally questionable. But more importantly, they're powerful and real. The action may be that of farce, but the panoply of women feels thrillingly familiar.

It's a breath of fresh air on Broadway in a spring season dominated by the ghosts of producers' bad behavior and lackluster entries from once feted male playwrights. Maybe Broadway too is simply afraid of the alternative — but POTUS is a brilliant reminder of what can happen when you put women in charge. And let them make you laugh.

-
Entertainment Weekly
Back to PRODUCTION