110 in the Shade was a marvelous show for New York City Opera to add to their repertoire. Scott Ellis made a call to the acclaimed composing team of Harvey Schmidt and Tom Jones saying he wanted to stage a big production of their beloved, if rarely performed, show. They were pleased and excited and up for making tweaks and changes. For Scott Ellis and me, the highlight of that show was working with Schmidt and Jones and also N. Richard Nash – the renowned book writer and author of the play “The Rainmaker” upon which 110 in the Shade is based.

We were once again lucky to have Paul Gemignani as our musical director and conductor of the show, guiding and blending the opera chorus voices and musical theater voices to sound as if they were from the same genre. No conductor is more spirited in the pit and more supportive of the singers. Schmidt and Jones loved the 60-piece orchestra – quite a change from the typical 20-piece orchestras you find in a Broadway pit. Under Gemignani’s guidance, they were able to adapt and expand their original orchestrations.

The story takes place on a hot summer day in 1930 on a drought-stricken cattle ranch in Texas. Lizzie Curry (Karen Ziemba) takes care of her family’s ranch, along with her father and her brothers – who worry Lizzie is destined for life of spinsterhood. A handsome trickster named Starbuck (Brian Sutherland) arrives in the dusty, dried up town and promises to bring rain. He changes Lizzie’s life by making her see herself in a new light. He also has an impact on local sheriff File (Richard Muenz), revealing how easily love can slip through your fingers if you aren’t open to it. The story ends with the promise of hope and renewal – and a rainstorm! The set was designed by the talented Michael Anania. He, along with lighting designer Jeff Davis and costumer Lindsay W. Davis, truly captured the drought, the heat, and the style of Depression-era America.

A high point was watching the consummate theater performer, Karen Ziemba, take on the role of Lizzie for an opera company. She was spectacular. She sang “Is it Really Me” using part of her voice rarely heard and it was sensational. As the character of Lizzie sings, she comes to understand her value and see herself as beautiful. Karen so gracefully acted the lyrics and the scene as she acknowledges Starbuck is responsible for opening her eyes.

Karen’s grandmother, Winifred Heidt, was a leading mezzo-soprano in New York City Opera from 1945 to 1950. It was meant to be that now Karen would take stage in a lead role for the company.

Karen’s version of the number “Raunchy” was hysterical. She bravely danced and crawled all over a free-standing double swing, comically proving to her father (Henderson Forsythe) that she can be any kind of girl she wants! Her fearlessness in rehearsal, her ability to tap into her strong technique and her smart choices make for a dreamy creative process for any director or choreographer.

Richard Muenz beautifully acted the lonely and stubborn File. His baritone was magnificent and made the score ring out. Brian Sutherland was fabulous as Starbuck – I was able to use his capable ease of dance and movement to add to his character’s bravura and mystery. His wonderful evangelical style of singing made it all the more believable that he would have the ability to charm an entire town.

Jennifer Paulson Lee and Craig Innes played a romantic couple who danced throughout the show. I loved dancing with them – they are performers who, through dance, represented a drought-stricken community in middle America. When the curtain rises, they do a pas de deux on and around a dry well pump, setting the tone for the evening.

Of course, this show has one of the best endings in theater history. Just as Starbuck admits he is a con man who can’t make rain and File admits he loves Lizzie – a clap of thunder rings out and a massive rainstorm pelts the stage. It was breathtaking! The audience was elated and their applause went on and on. I loved seeing the actors get hit with water – splashing their faces, drenching their clothes, dancing in and out of the pouring rain. It is one of the most satisfying curtains of any show, when the arts and craft of the theater happily defies all your expectations. 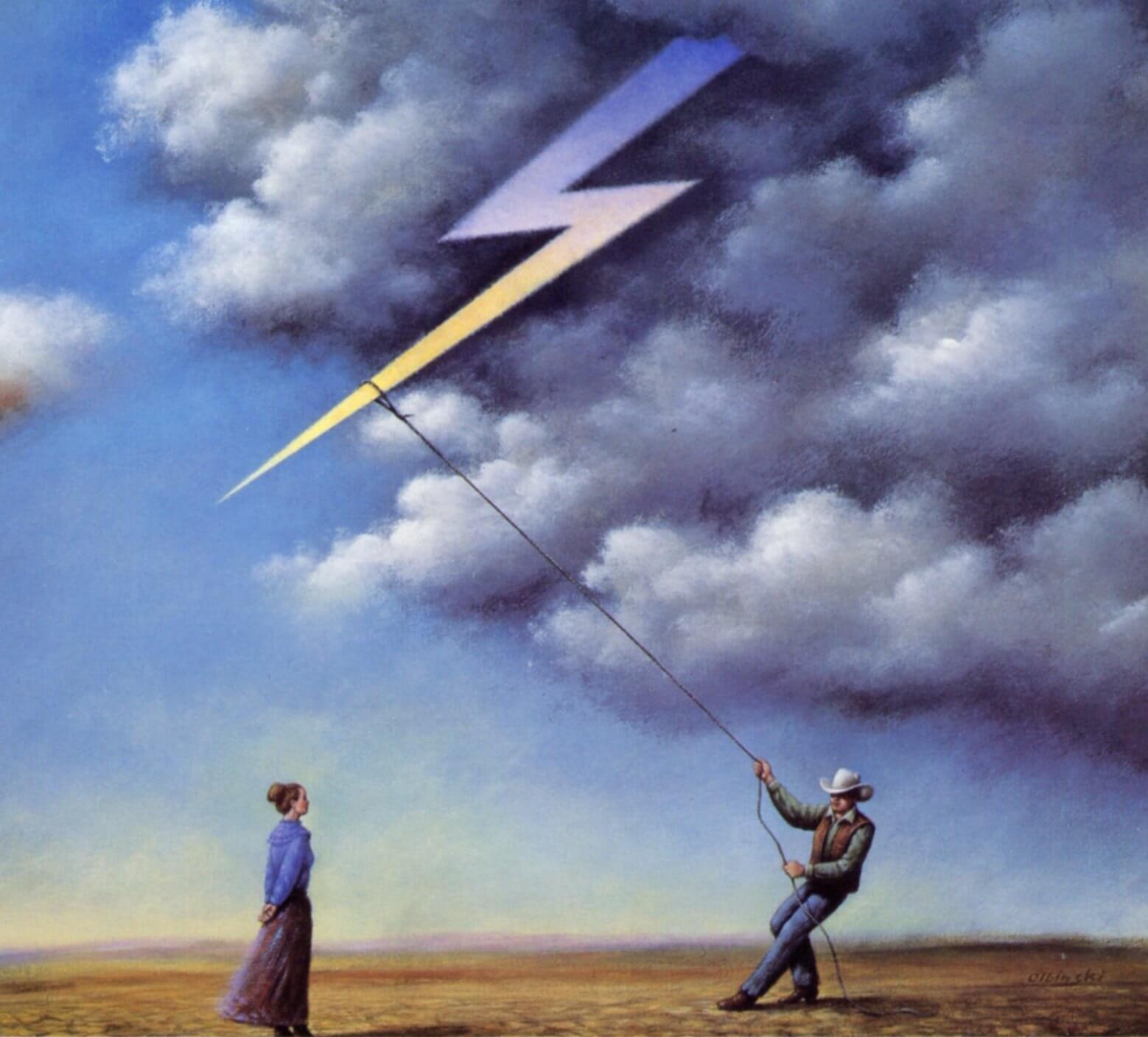 The logo artwork for 110 in the Shade. 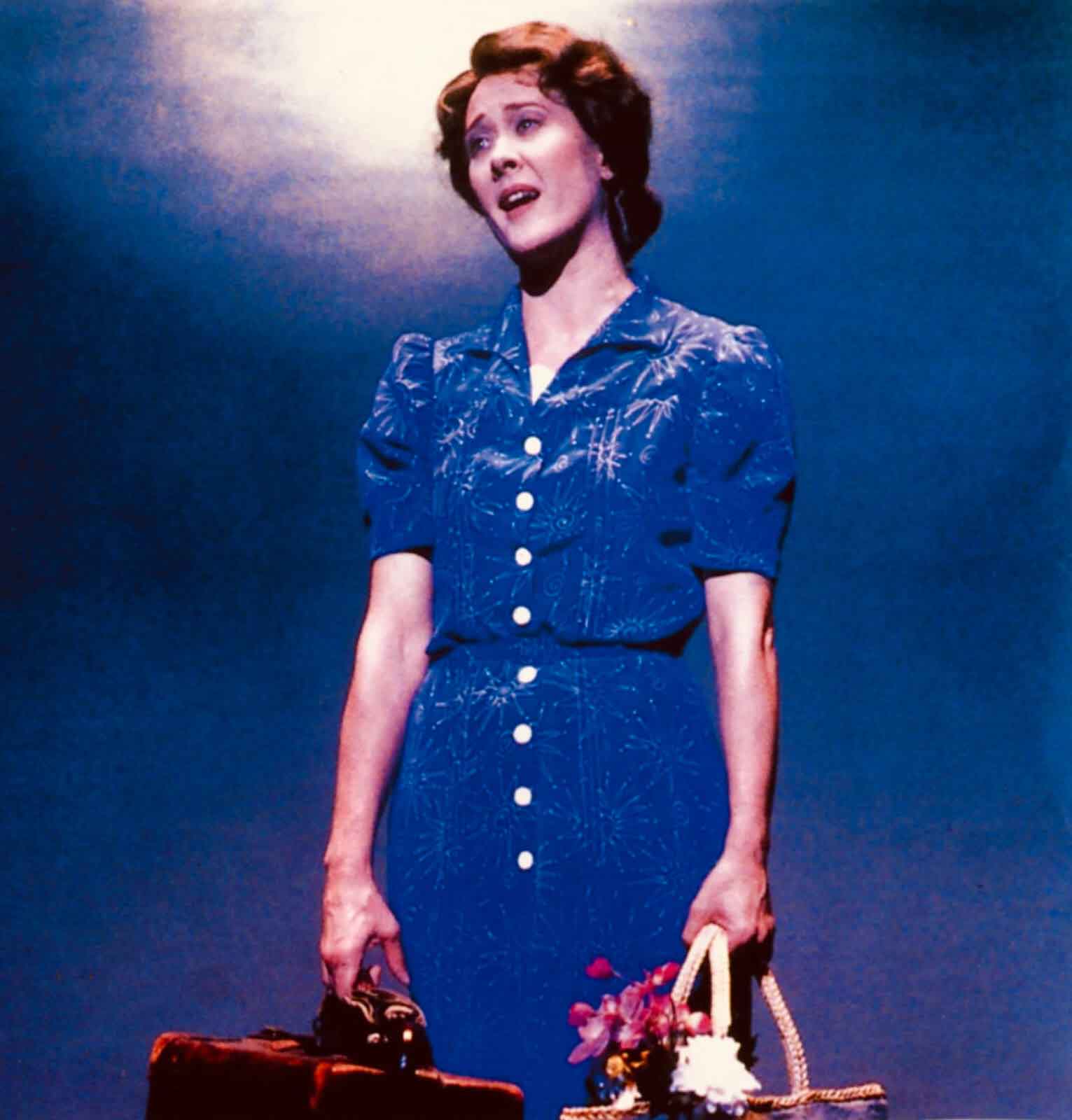 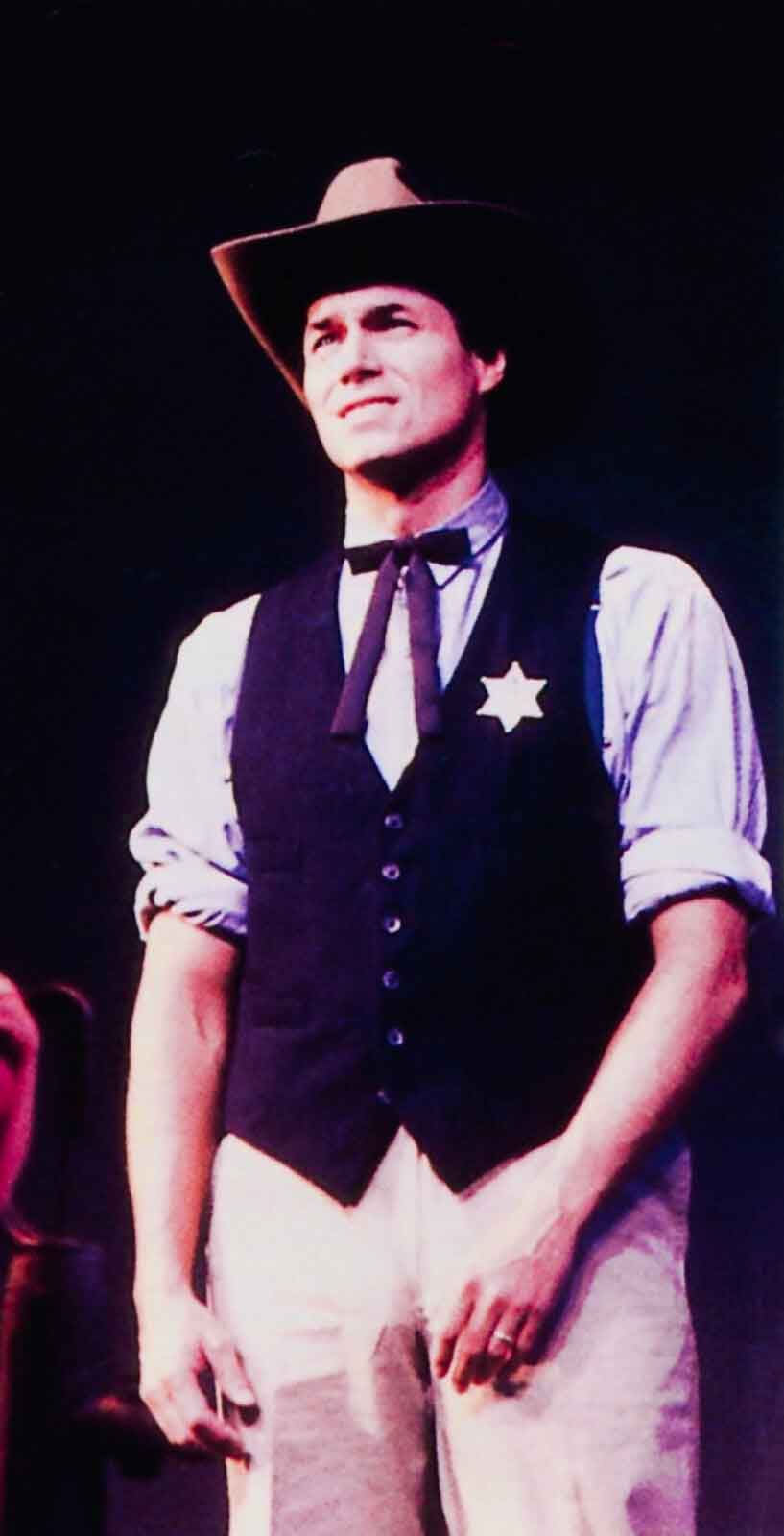 Sheriff File (Richard Muenz) from the New York City Opera Production of 110 in the Shade. 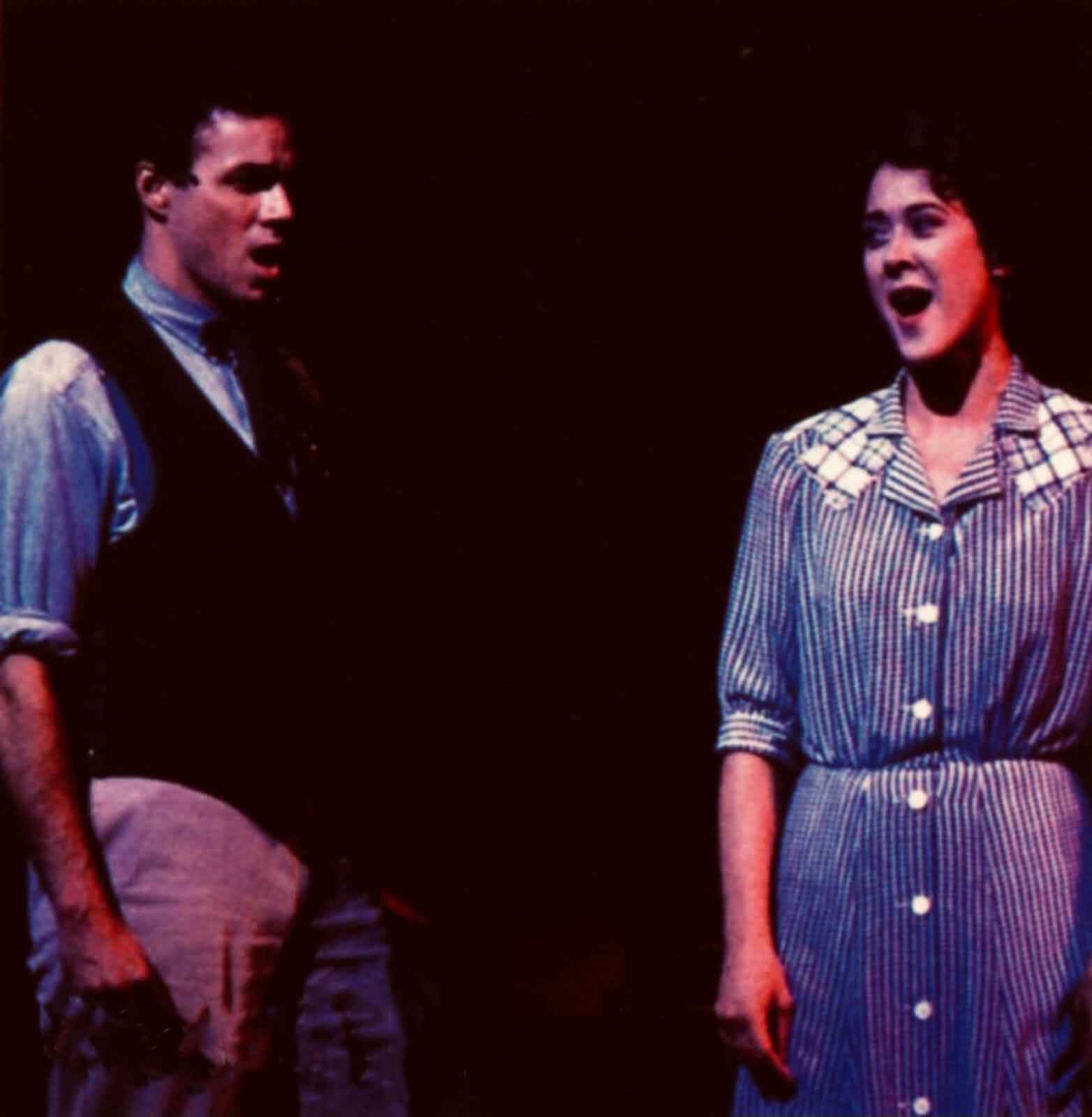 Richard Muenz and Karen Ziemba singing "A Man and a Woman". 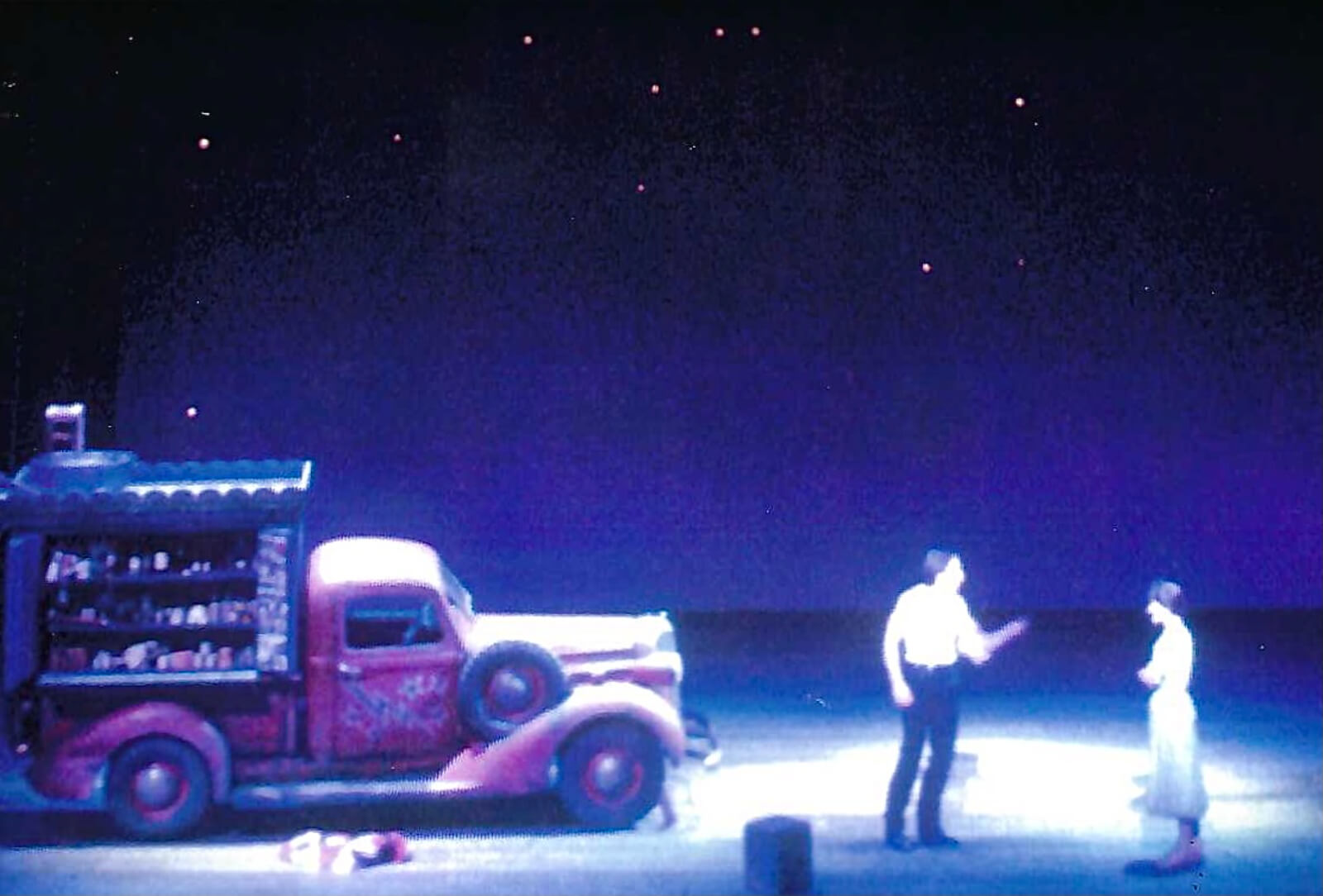 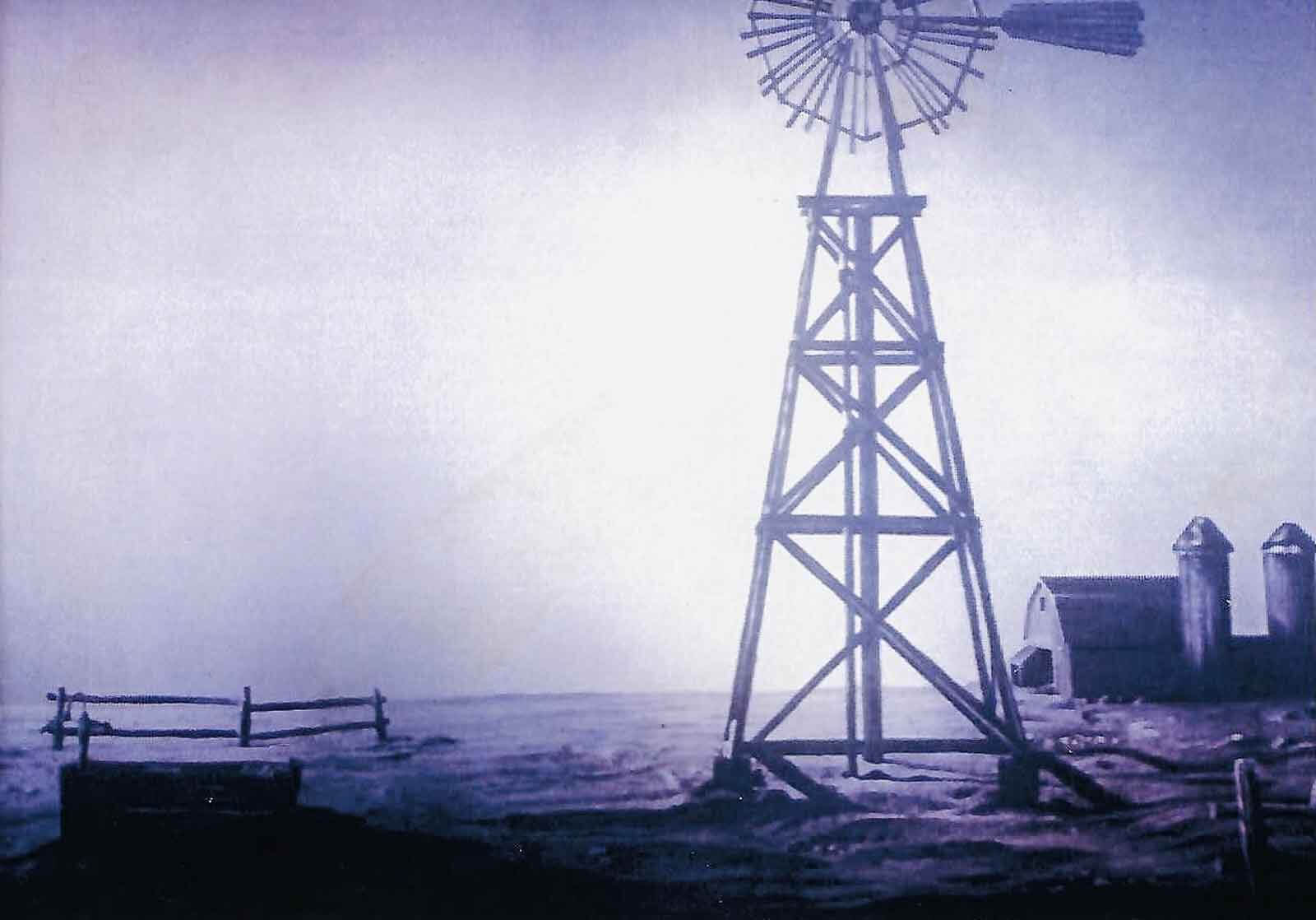 110 In the Shade at New York City Opera. Windmill Set by Michael Anania. 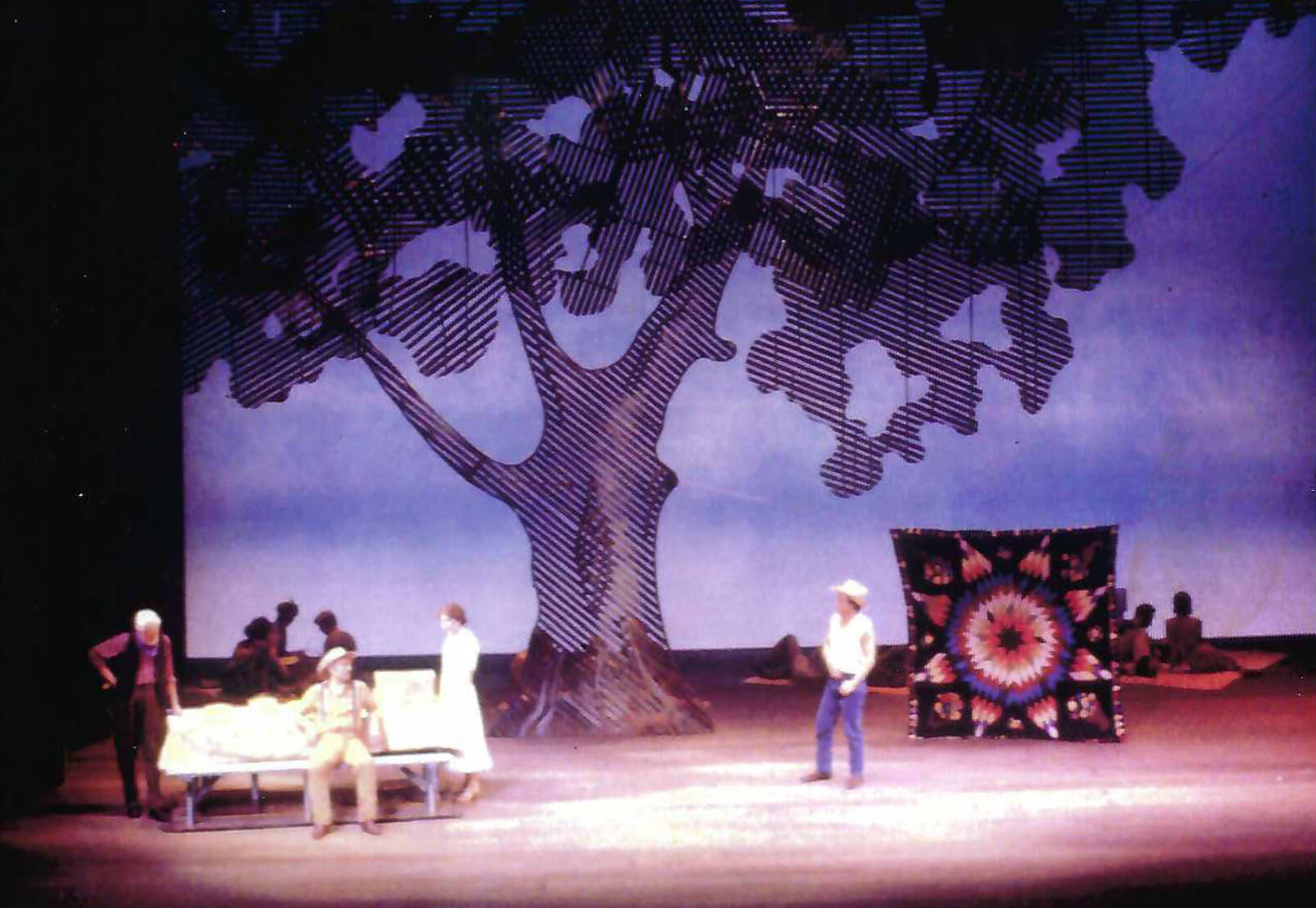 110 In the Shade at New York City Opera. Set by Michael Anania. 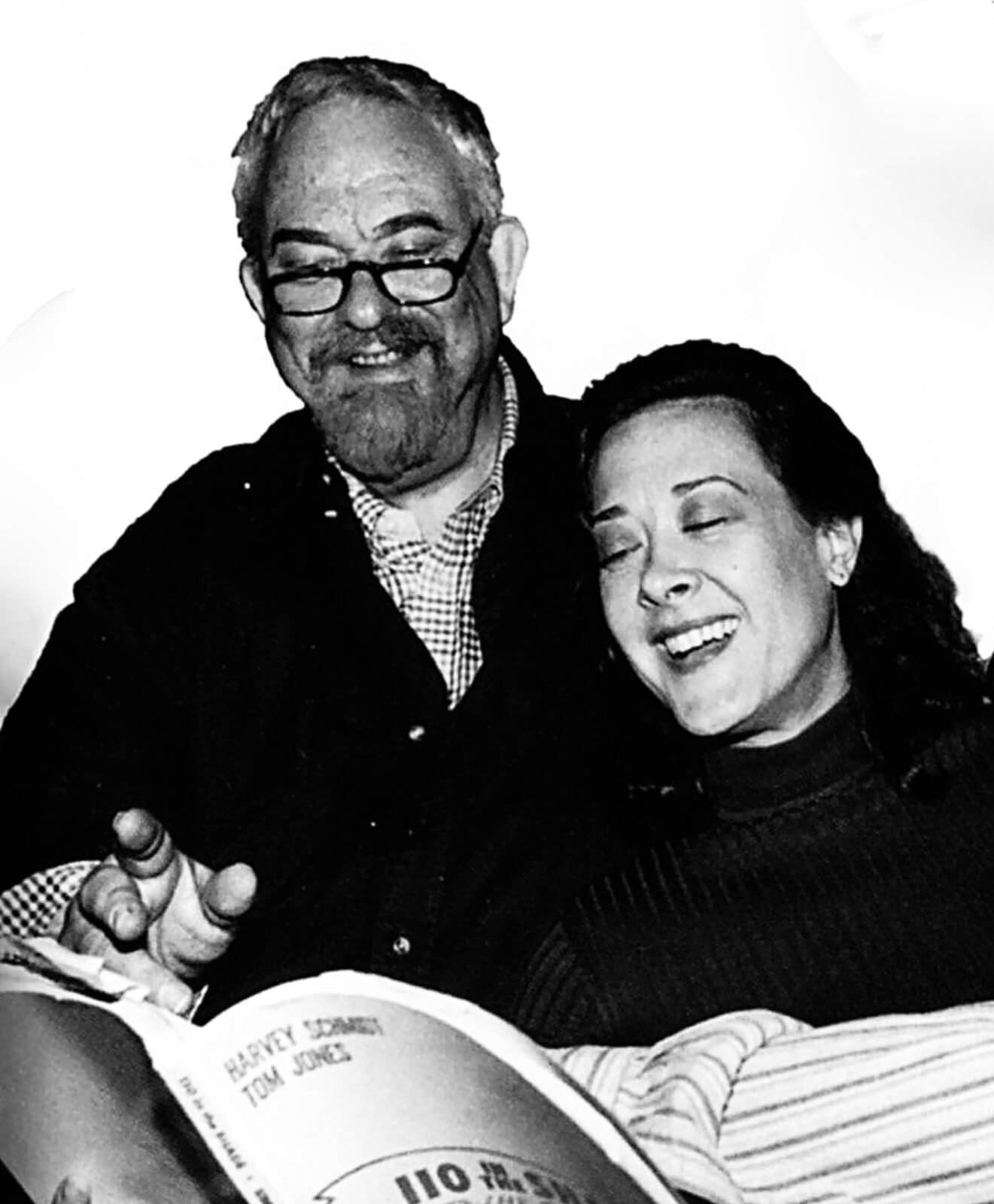