Many of us in the theater are here because we grew up with someone telling us stories. In my case, that person was my father. He was a salesman with a big smile who would regale the family with fantastical stories which absolutely delighted us. He’s gone now, but to this day I’m still not sure if those stories were true or not!

When writers Andrew Lippa and John August and producers Bruce Cohen and Dan Jinks came to see me about the possibility of doing the show, I was beyond excited. I knew the movie well and thought it would adapt beautifully to the theater.

Big Fish is a fantastical tale that shows us another way of accepting life and, inevitably, death – a rarity in musical theater.

The story is set in Alabama and centers on the Bloom family – Edward (Norbert Leo Butz), his adoring wife Sandra (Kate Baldwin), and their son Will (Bobby Steggert). The drama arises from misunderstandings between father and son. A traveling salesman by trade, Edward is known for his tall tales about his amazing adventures with giants, mermaids, witches, werewolves – all of whom we lovingly brought to life on stage. Will loved these stories as a child, but as an adult he grapples with what was real and what wasn’t, and whether or not he even knows his father. Now an old man and in failing health, Edward’s relationship with the truth has driven a wedge between him and Will. Will needs to understand his father before it’s too late, to know the man behind those stories – a quest that I personally connect with.

In a show that moves seamlessly between reality and fantasy, the design was crucial. Projections played a big part in delivering the fantastical elements. To evoke a southern, rustic feel, set designer Julian Crouch used natural wood to create the scenery. Benjamin Pearcy, our projection designer, discovered how to illuminate the stage with his stunning projections to transform the set into Edward’s fantasy worlds. The wood reflected the projections perfectly — we applied fantasy to what is real.

Ben’s projections also turned a forest into a coven of spinning witches. With the help of costume designer William Ivey Long’s clever capes, we projected trees onto silky material that the dancers could whip and crack as they spun around the stage, shapeshifting as they moved.

At the front of the stage where the orchestra pit is usually found, we placed a river. Thanks to lighting designer Don Holder’s magical lighting, it looked as if it were filled with rushing water.

In addition to bringing a flavor of the South to the design of the show, I wanted to bring southern style to the choreography. I tapped into different rhythm steps, from country western clogging to a southern step called flatfooting.

I created a dance with a combination of hambone and clogging that I called the “Alabama Stomp”. The show opens on one of Edward’s big fish stories as he teaches the step to a fisherman down on his luck, claiming it’s all he needs to turn his fortunes around because “something about this rhythm really gets their fins movin’”. As the cast stomped their way around the stage, fish came flying out of the orchestra pit “river” and landing onstage.

I also used ballet for some of the fantastical moments – a mermaid’s magical transformation into a human (Sarrah Strimel) and a campfire that wondrously came to life, its flames dancing across the stage (Bryn Dowling).

Directing the family scenes with Norbert, Kate, and Bobby was intense and revealing. These incomparable actors brought tremendous insight to their characters and their relationships, always pushing themselves to go farther. In the end, it’s those intimate moments with the family that resonated with the audience, more than the fantastical images. During the show’s final scene, you could hear people in the audience weeping. I think it was because they see themselves in this story – they recognize the discontented son or the charming but elusive father or the unconditionally loving wife and mother. The audience is entertained by the fantasy, but it is John August’s work that makes the characters so accessible, asking the audience to reconcile with the choices and missed opportunities of one’s life.

I have many favorite moments in this show. One is the character of Sandra singing the beautiful ballad “I Don’t Need a Roof” to her dying husband as he lays his head in her lap. This moving song represents the deep love of a couple who have survived many years together. Andrew Lippa truly tapped into the romance of the story for his score – “Daffodils” and “Time Stops” are also exquisite musical theater ballads.

The circus scene was filled with funny and colorful characters, including three dancing elephants. The curtain opened on three enormous elephant butts, swaying naturally – and, whenever Edward wasn’t looking, they would all do a little tap step together. It made me smile every night.

The moment that moved me to tears was the funeral scene. It takes place at the river's edge and we watch as, one by one, each guest drops a flower into the river in memory of Edward, then turns to shake Will's hand. We see Will slowly realize that each guest bears a resemblance to someone from his father’s big fish stories. Edward embellished his adventures to make people happy and to make him the hero of his own story.

Escapism is essential when life gets rough – that’s why we turn to the theater. It restores us. We are just like Edward Bloom in that a good story can change someone’s humdrum existence into something enthralling. We need our imagination if we have any hope of healing.

Big Fish was a big, beautiful, life-affirming Broadway show. I loved its fantastical side, its heartfelt side, and its profound message. At the show’s end, we flash forward a few years later and see Will and his son returning to the river. Will’s father left him a legacy of stories and we watch as Will begins to tell those tales to his own son. The story goes on – nobody really leaves us as long as you can tell their stories. 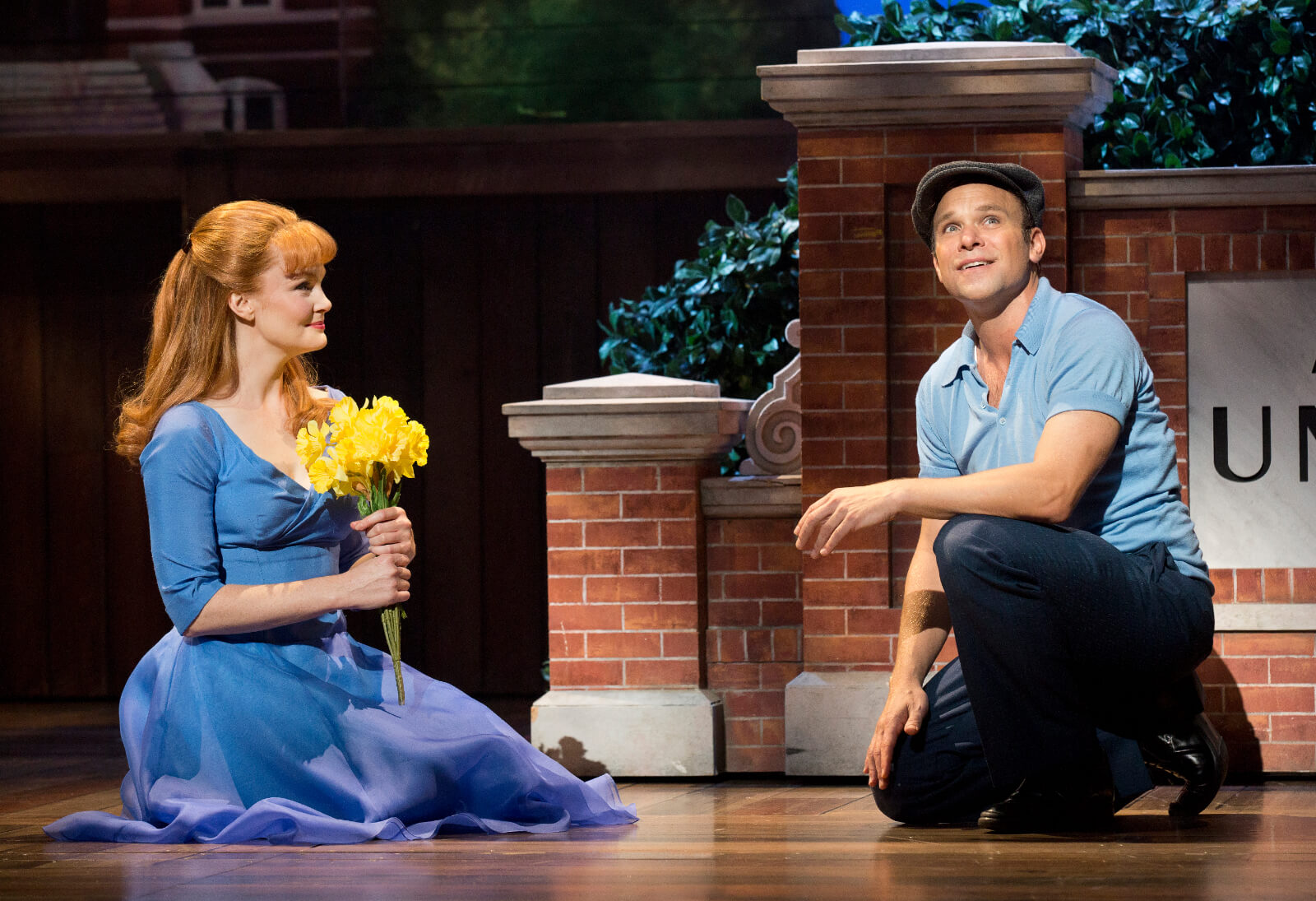 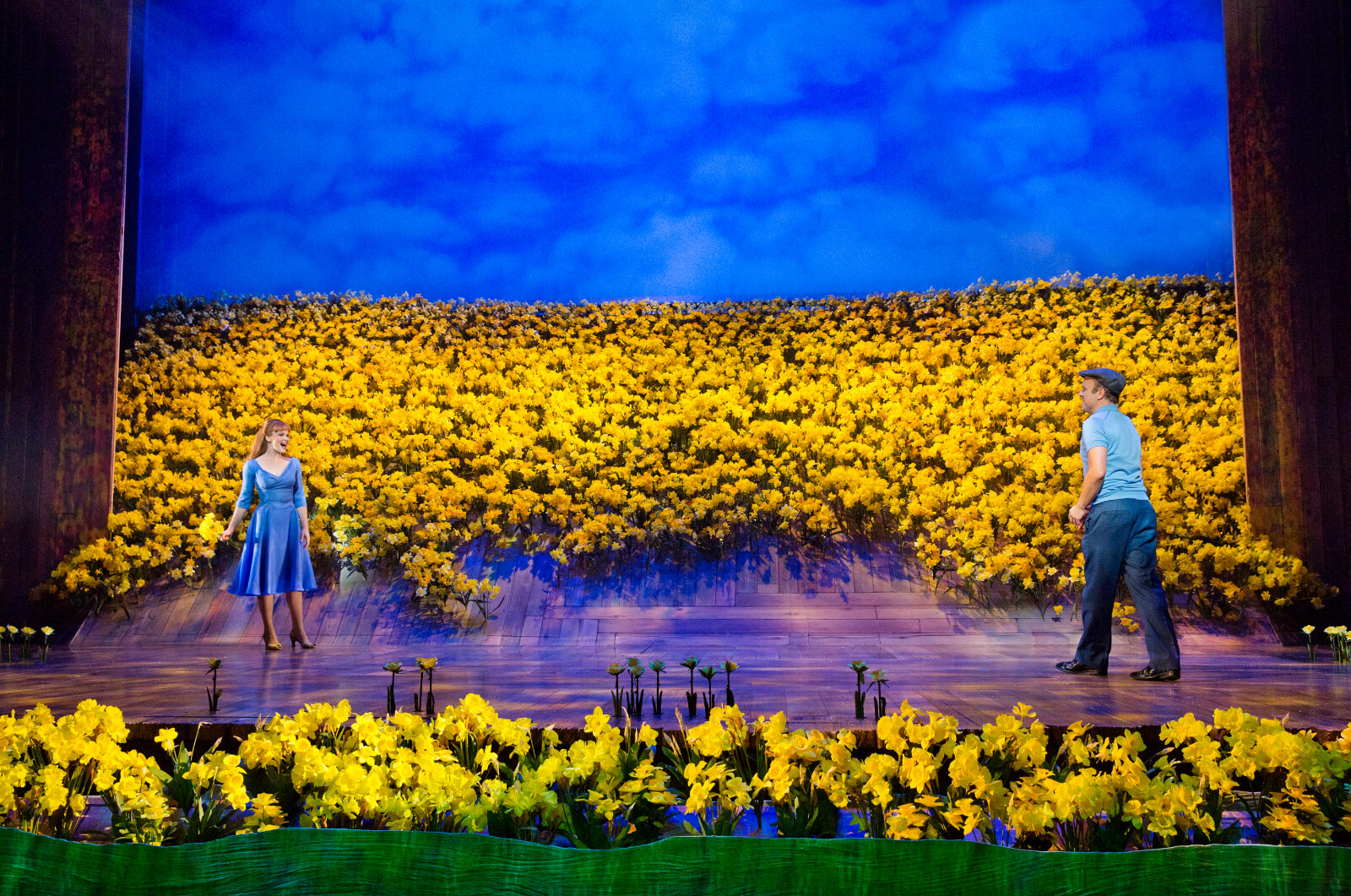 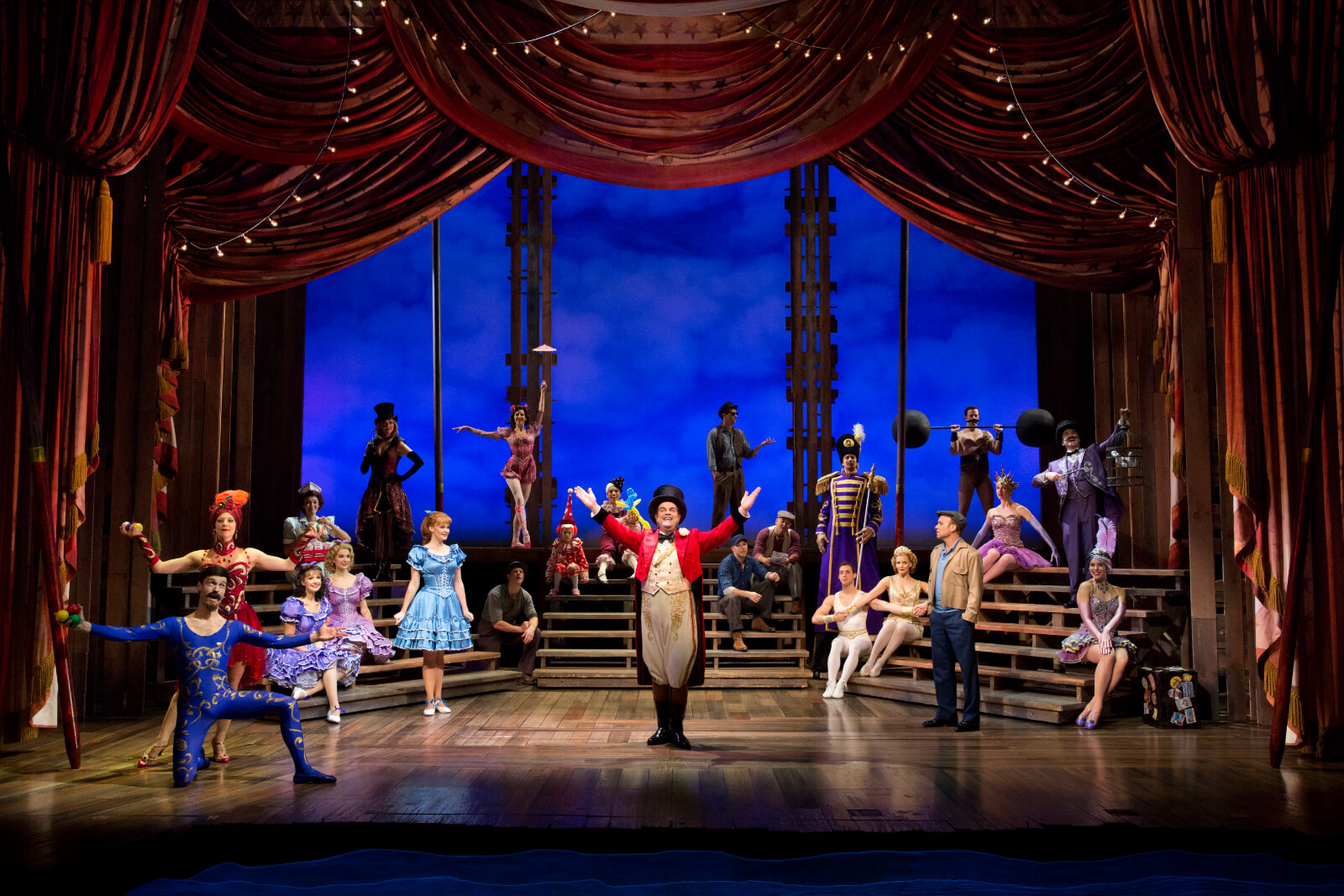 Amos Calloway (Brad Oscar) with the ensemble in the Calloway circus. 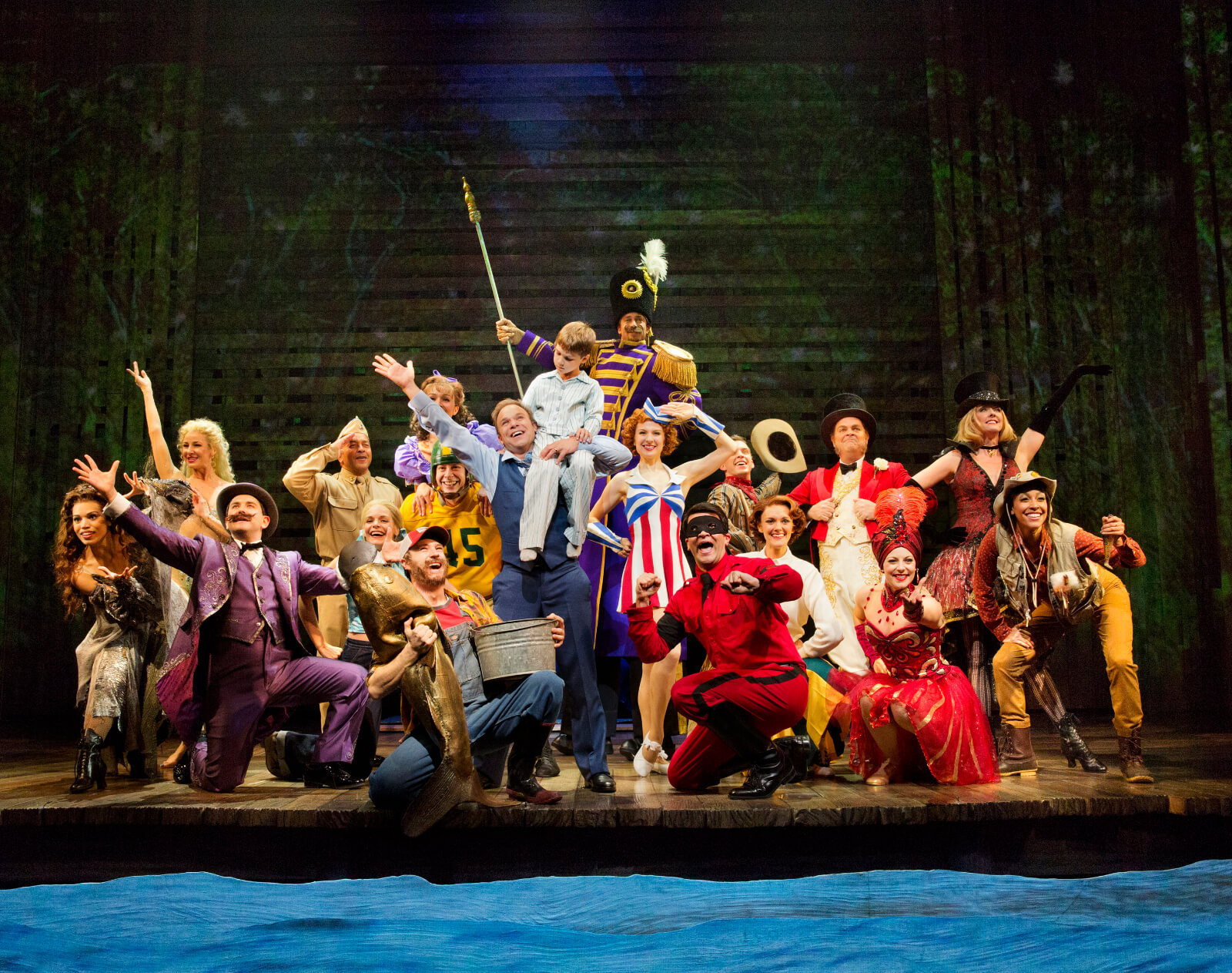 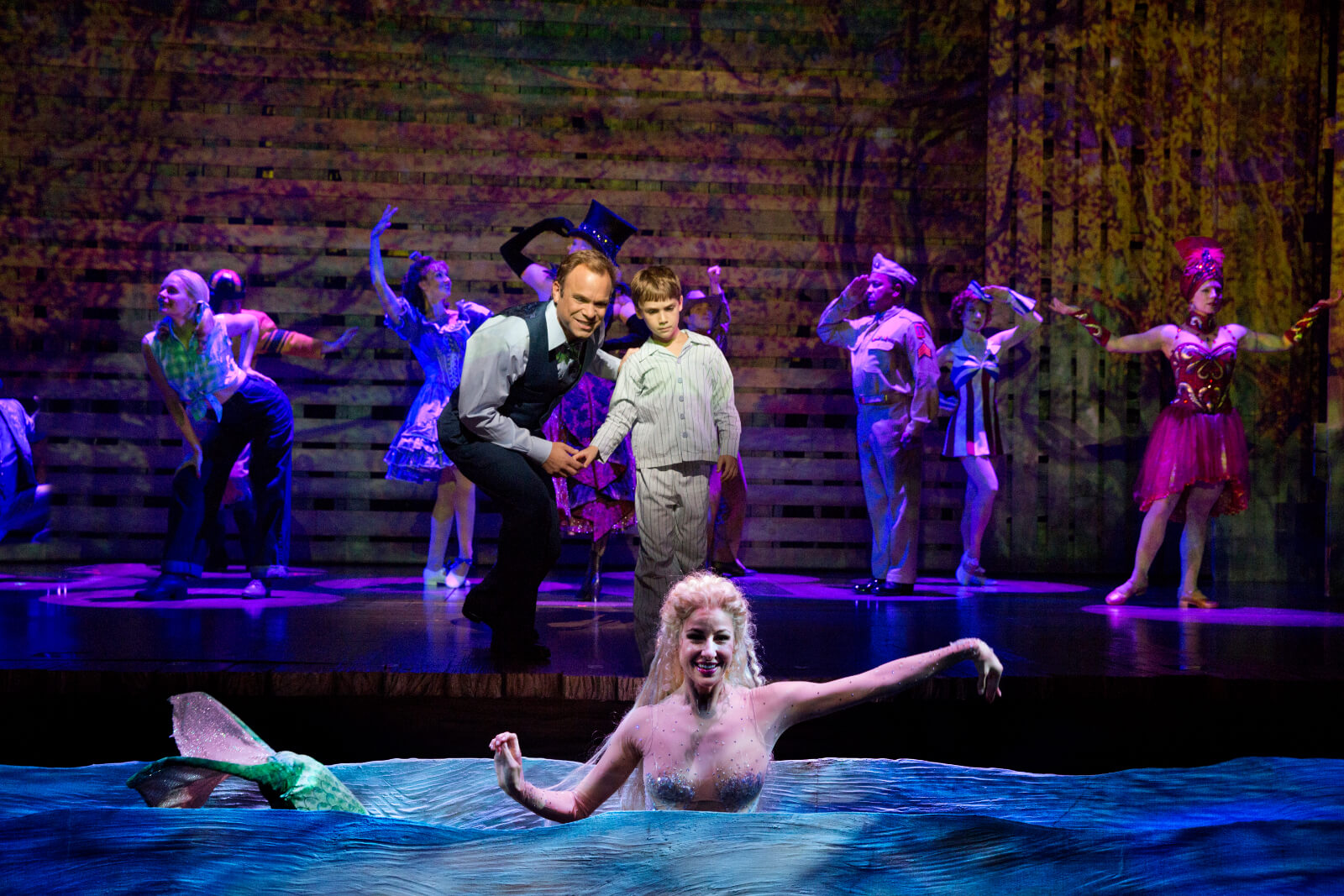 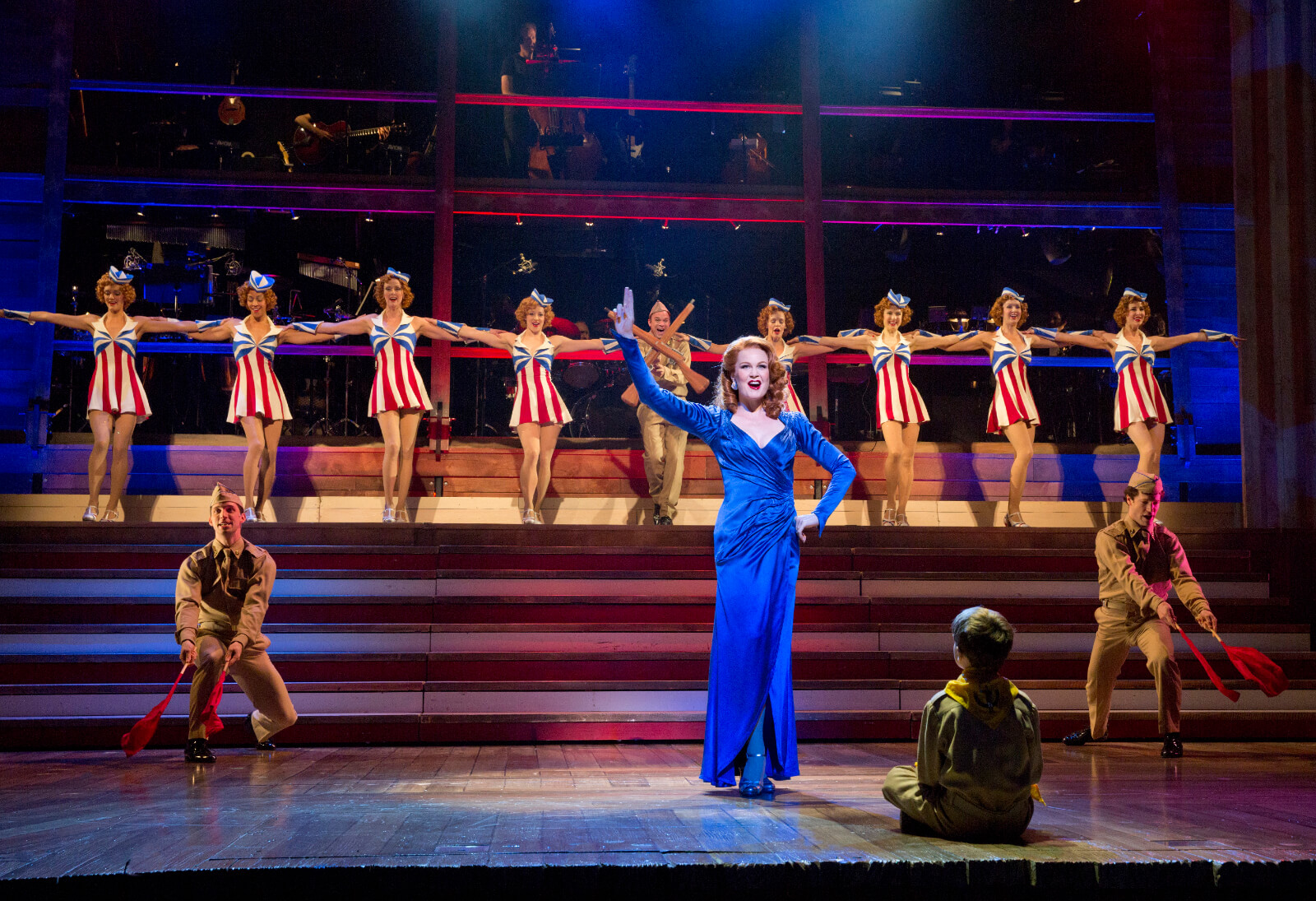 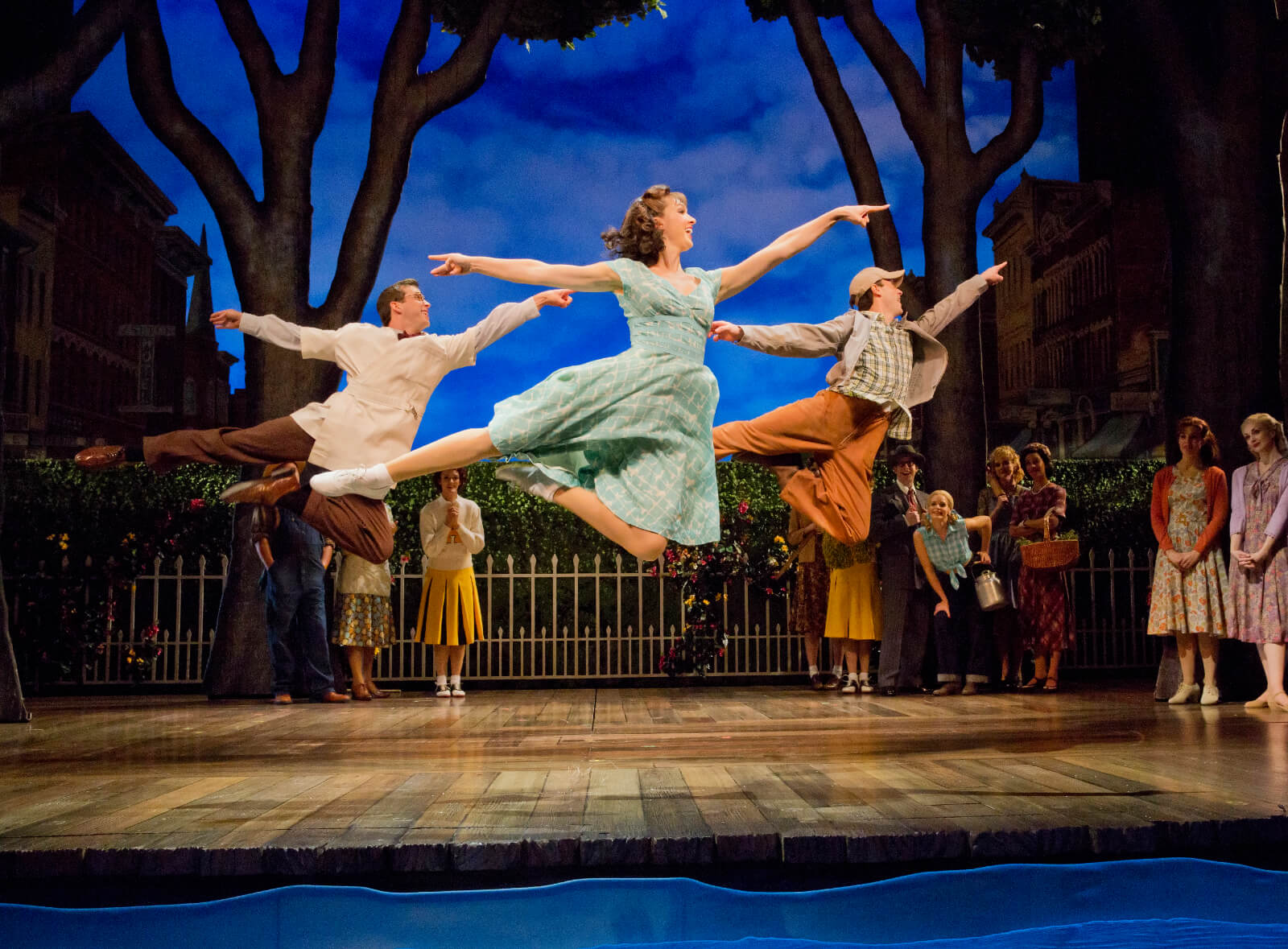 Jason Lee Garrett, Lara Seibert Young, and Cary Tedder performing "Out There on the Road". 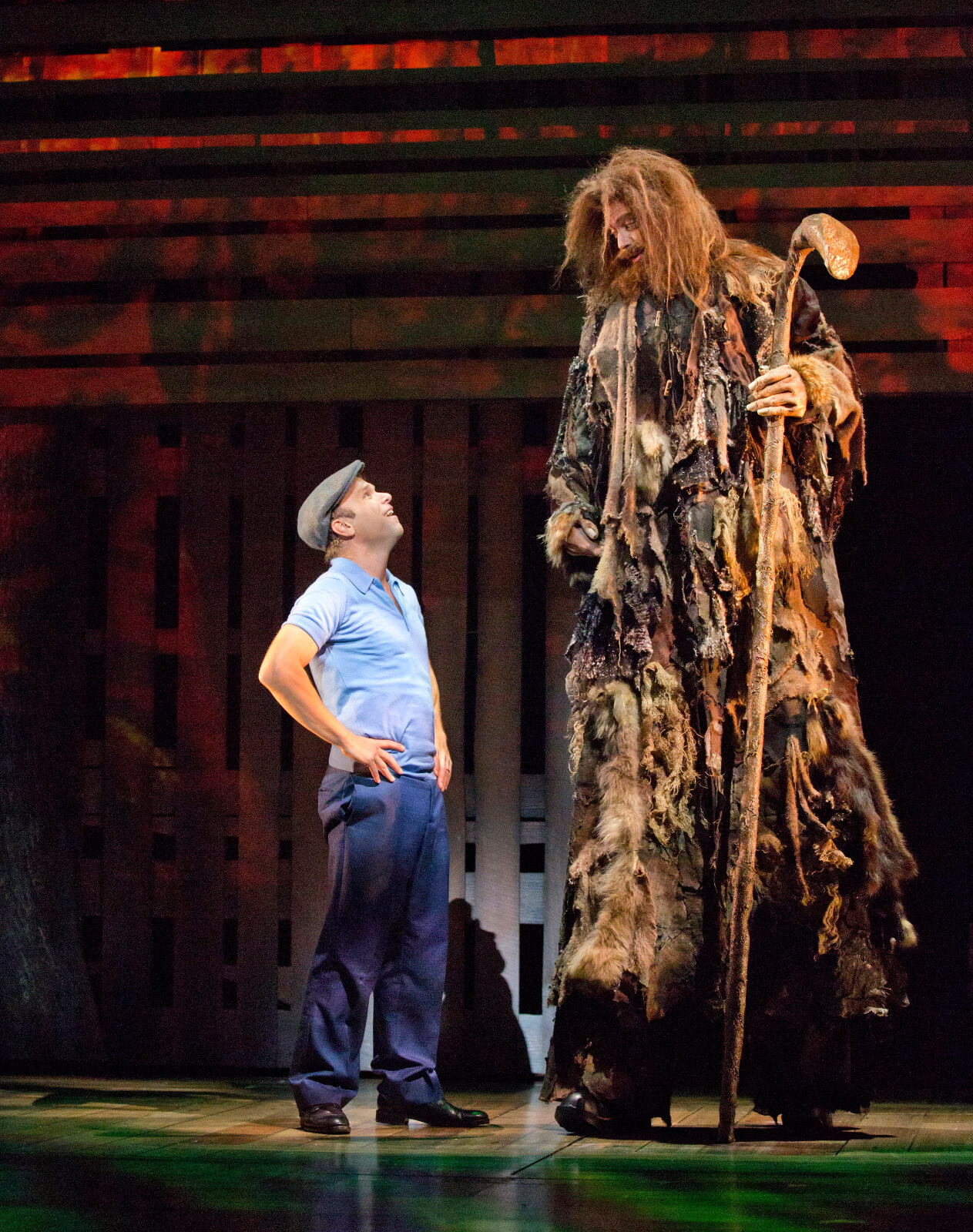 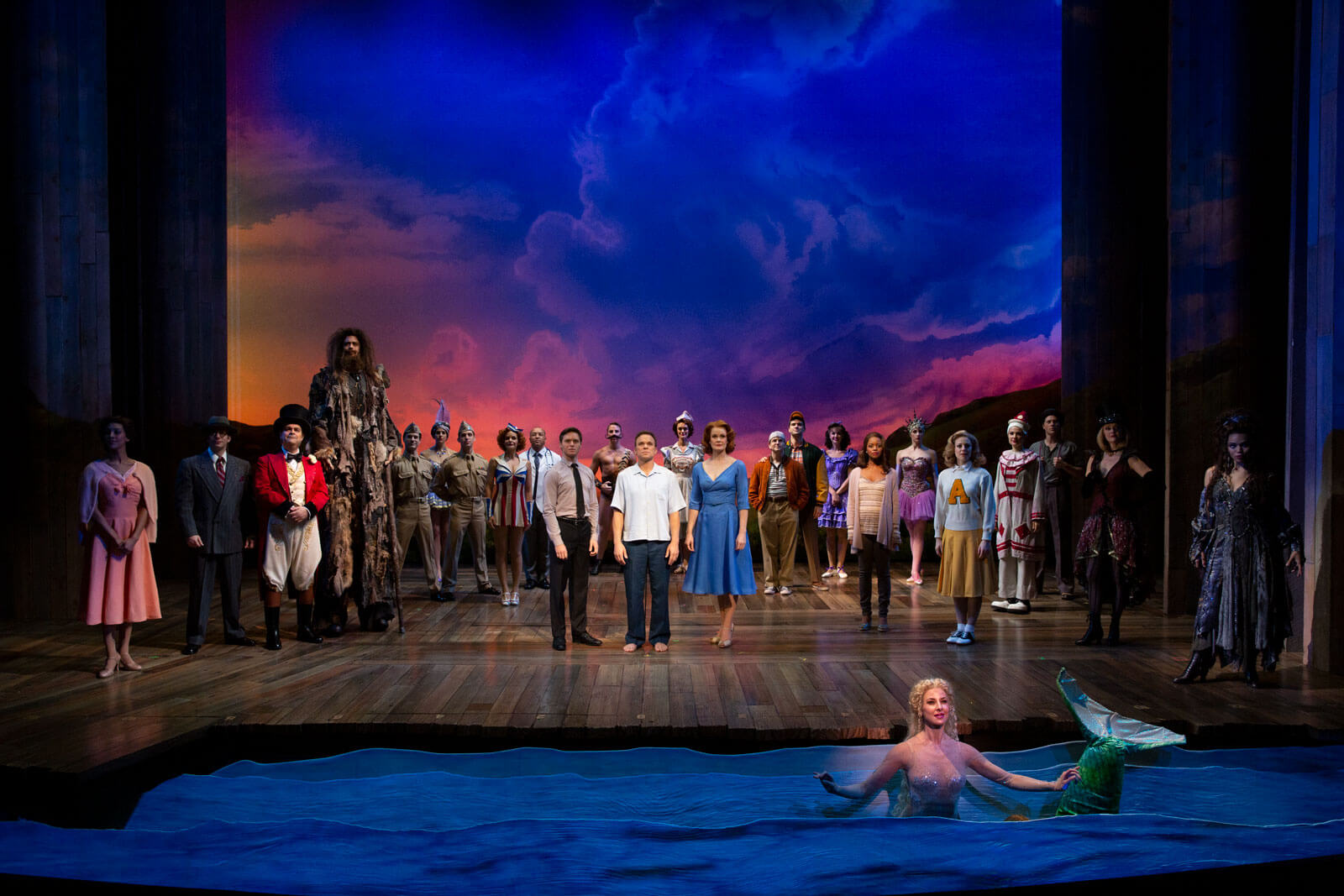 The cast of Big Fish performs "How It Ends". 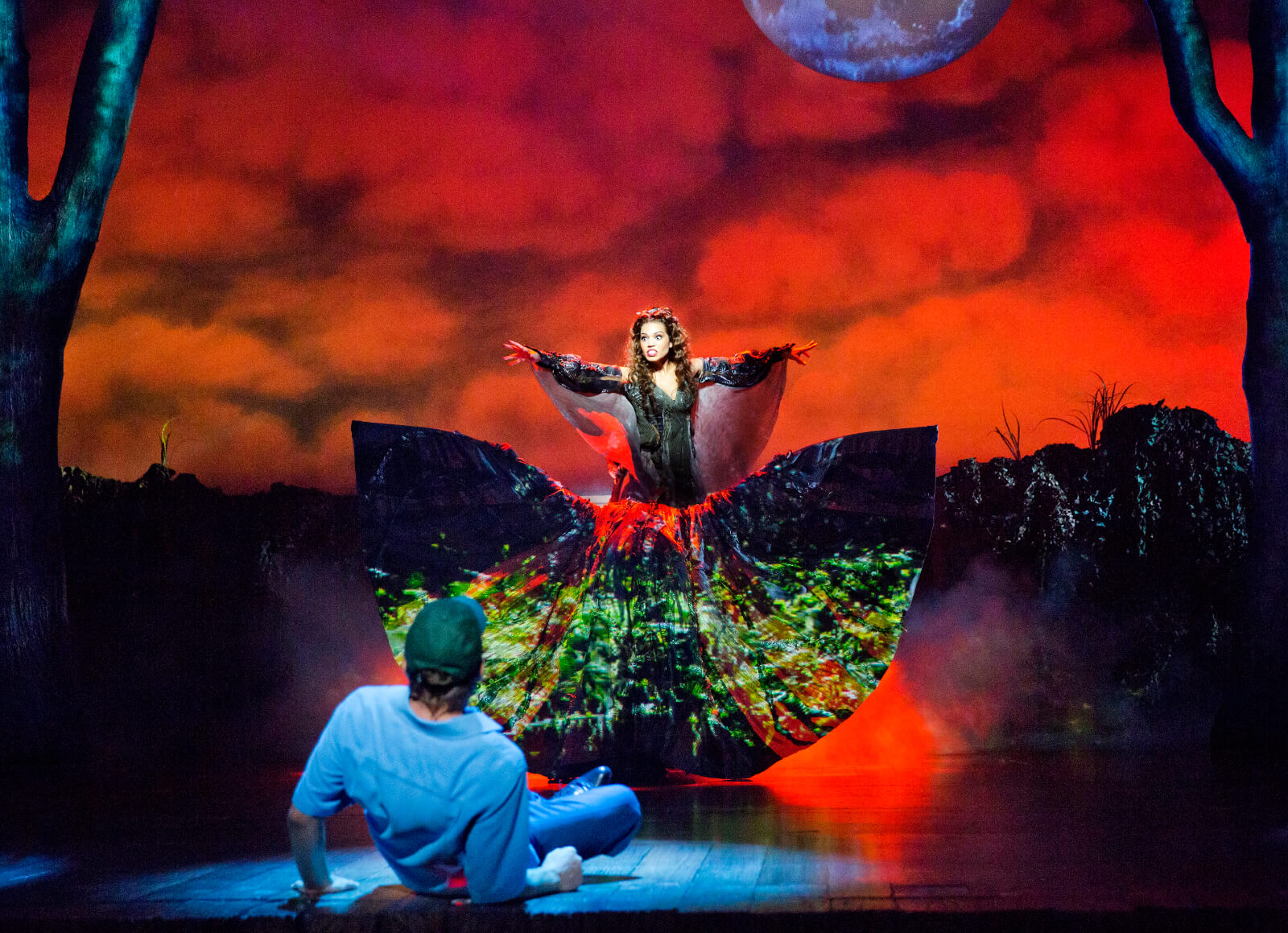 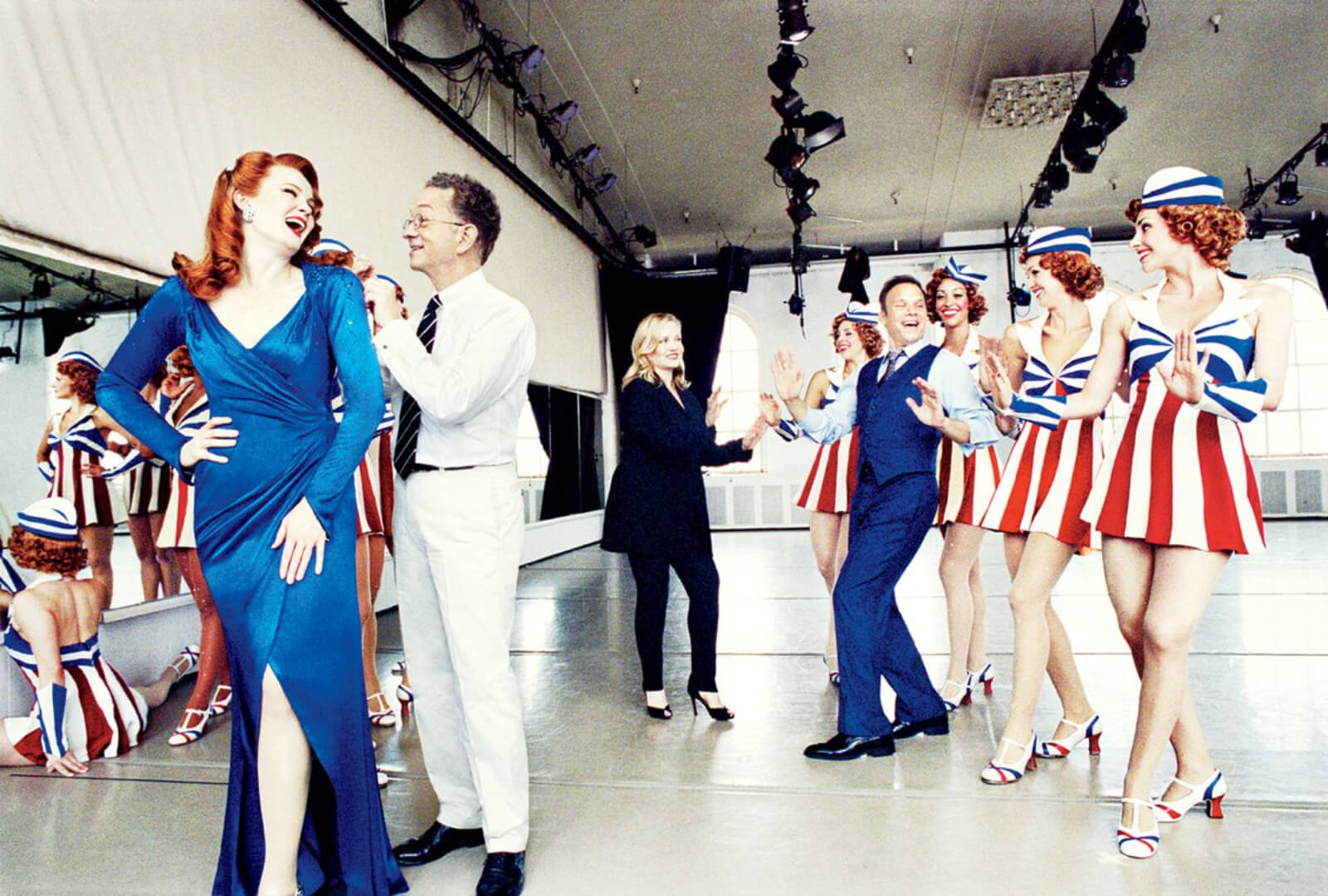 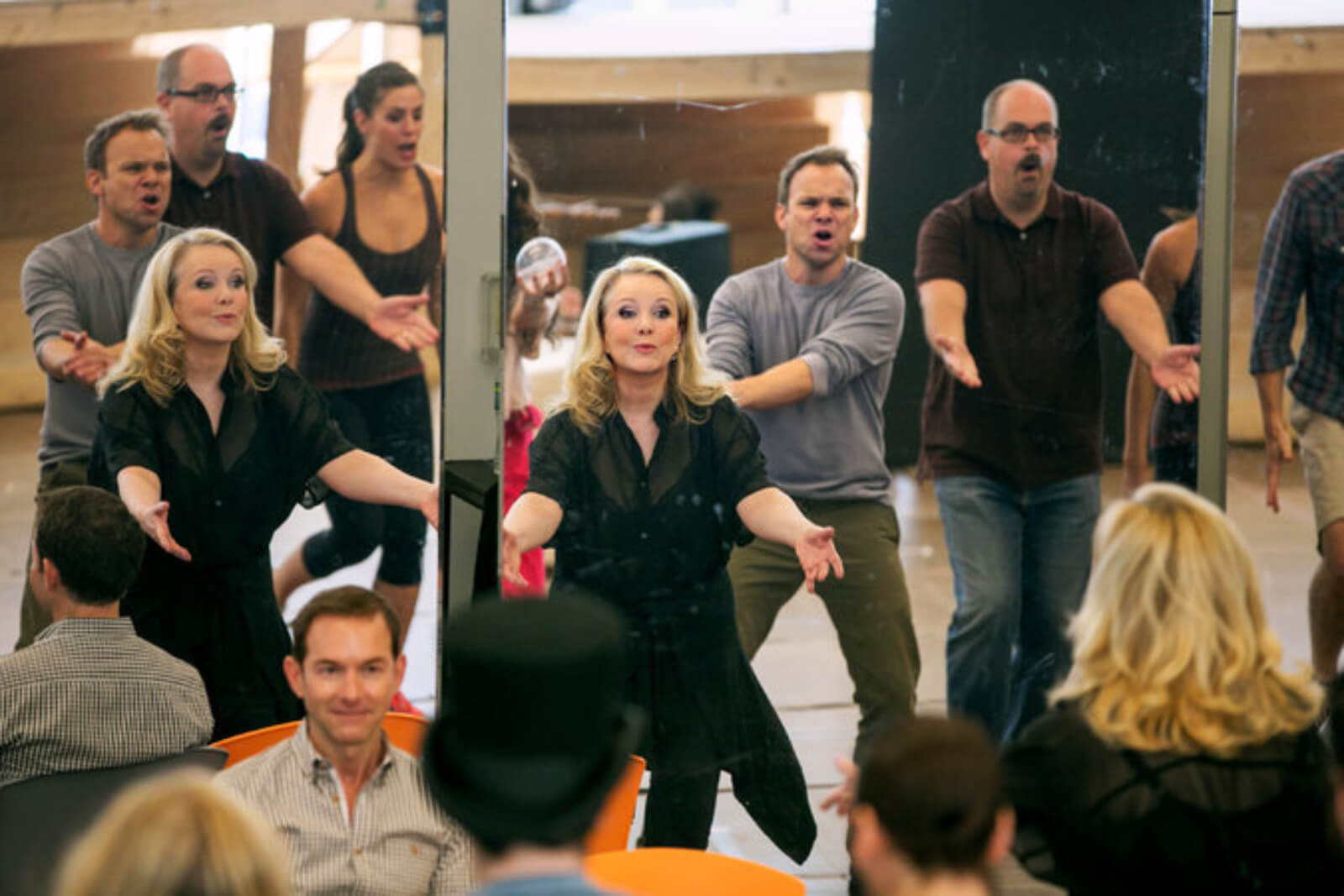 Susan Stroman rehearses the cast of Big Fish in their opening number "Be the Hero". 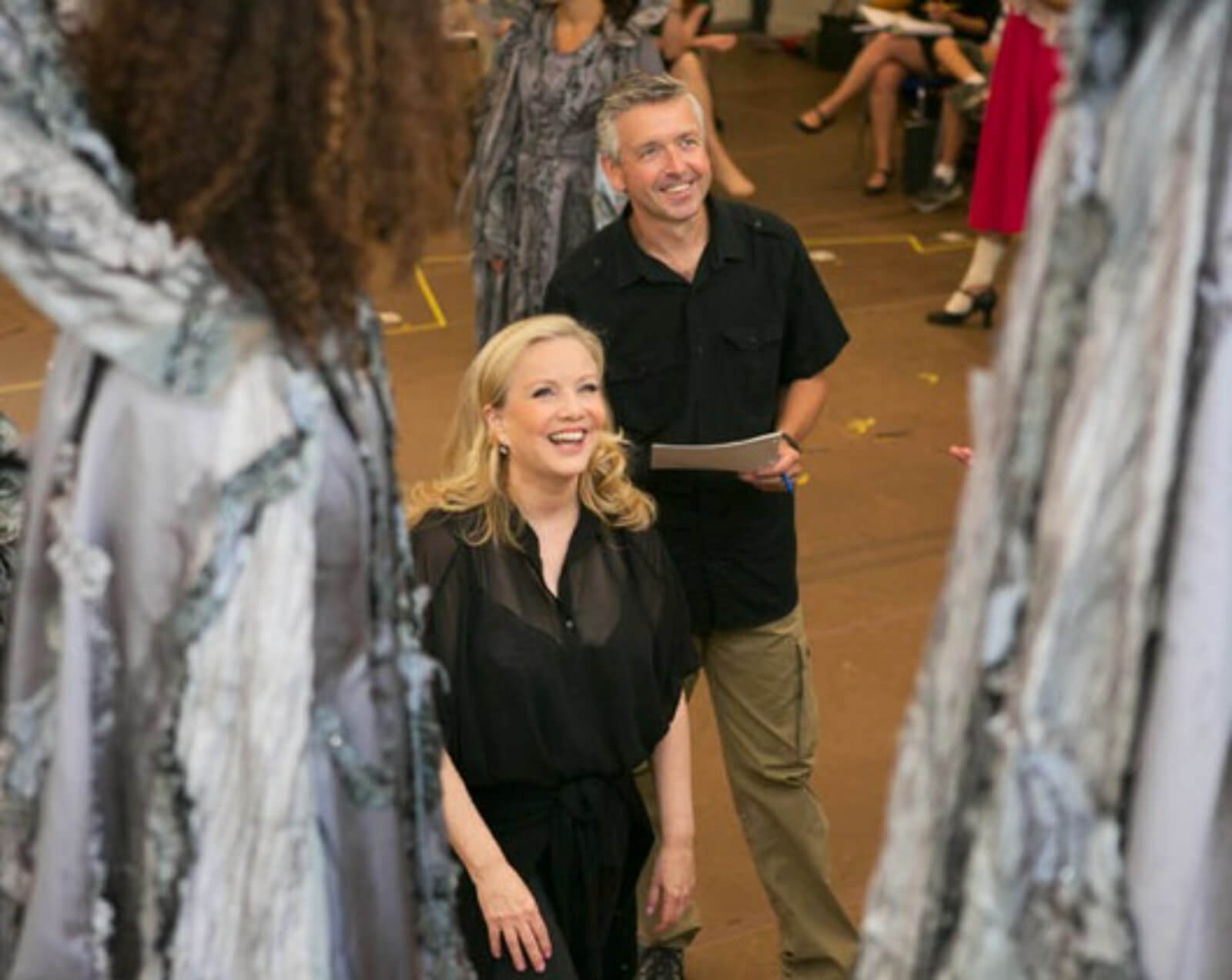 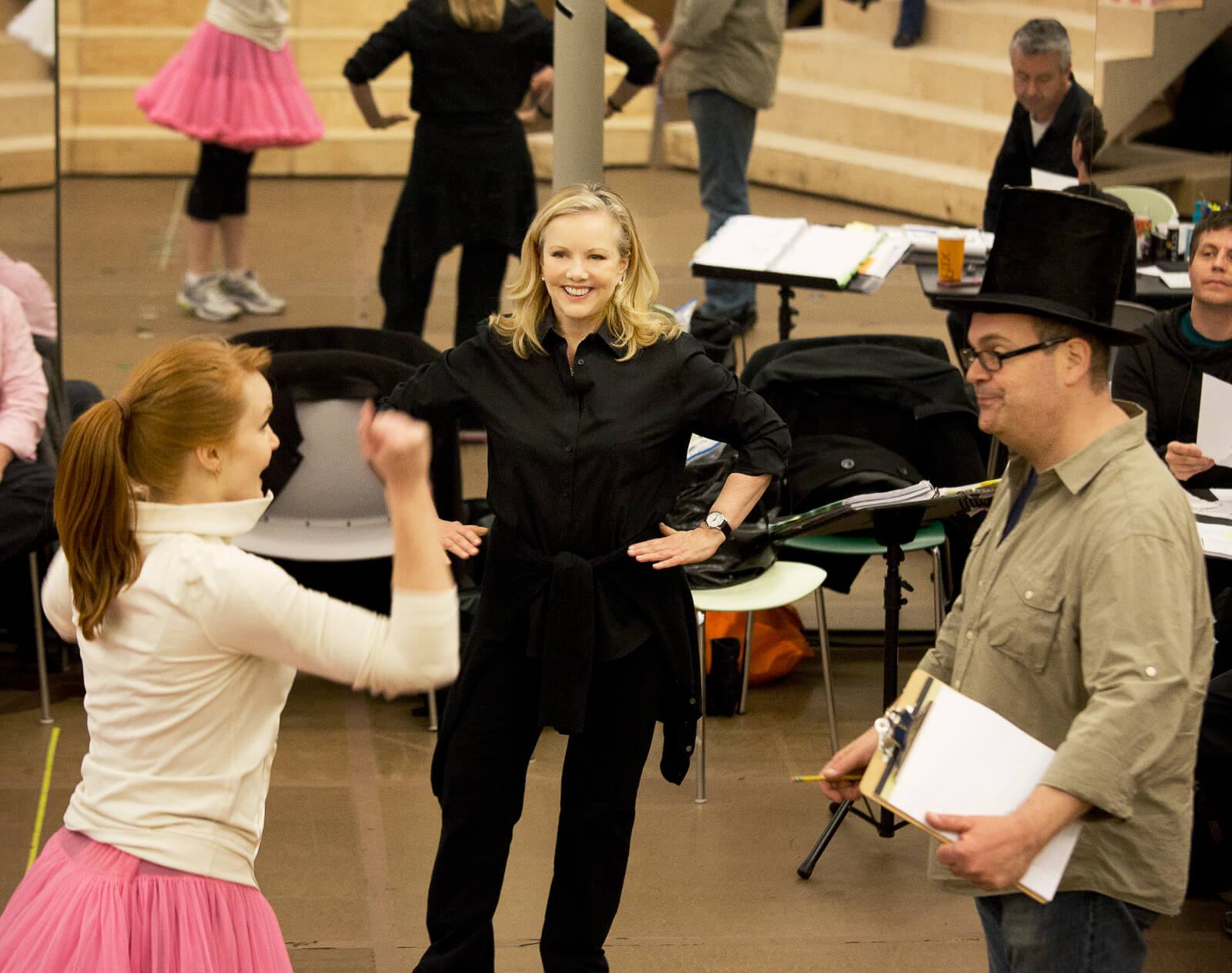 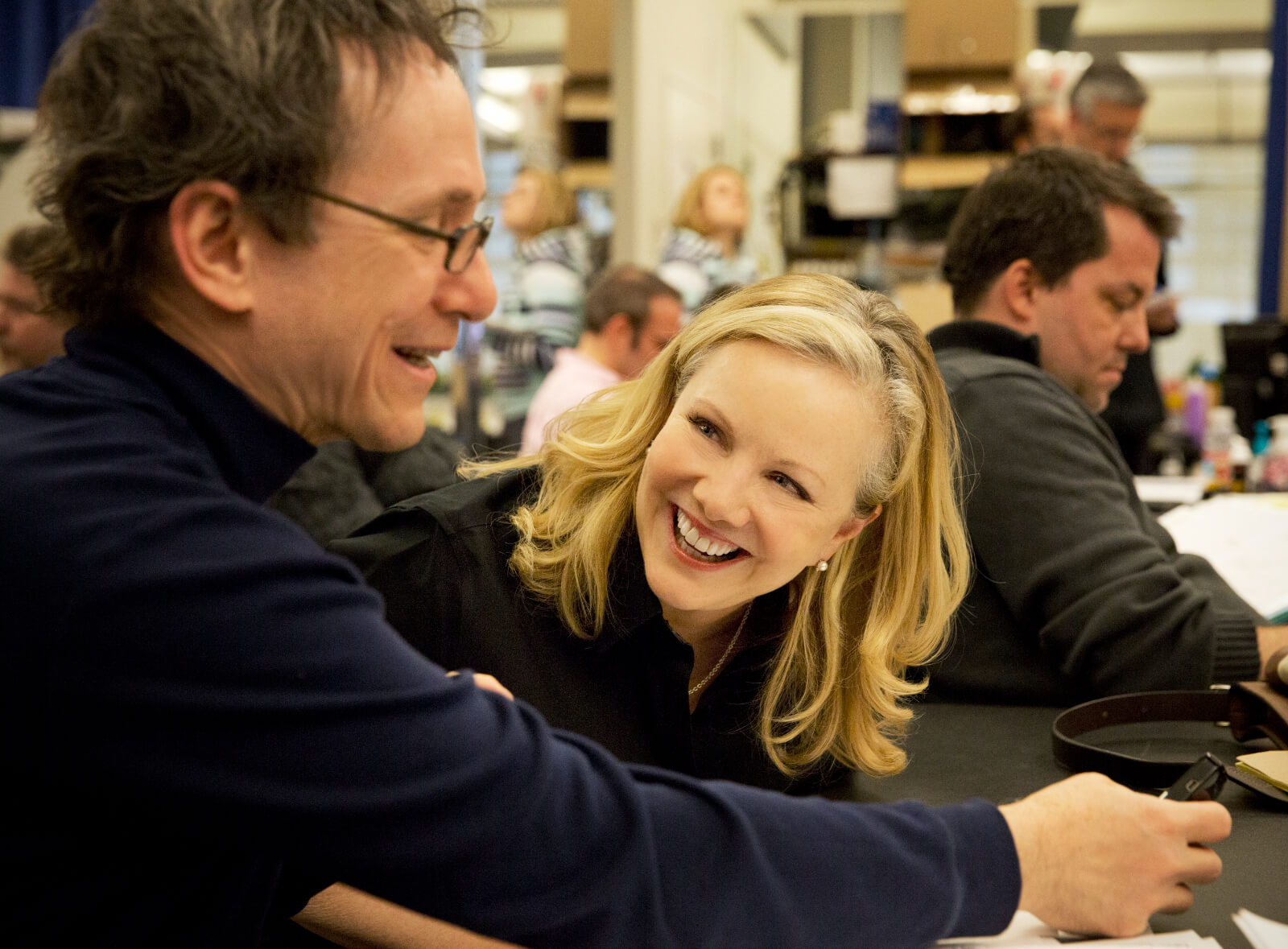 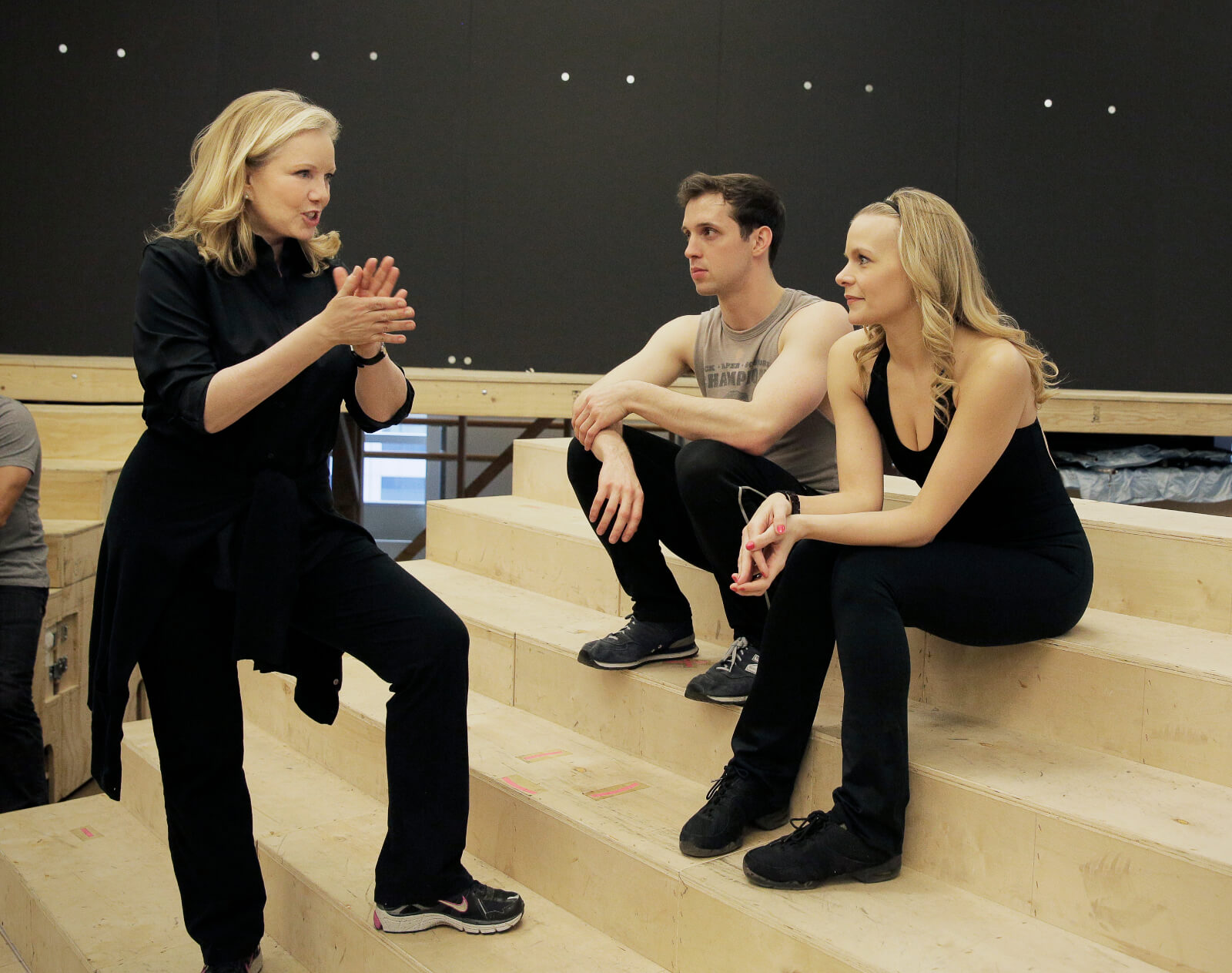 “Magic of the original story... undeniable magic of her own."
-
The Associated Press
“Brings genuine wit to her technically ingenious stagecraft”
-
Variety
“Downright magical… Stroman, the whiz”
-
New York Post

Outstanding Choreographer in a Broadway Show 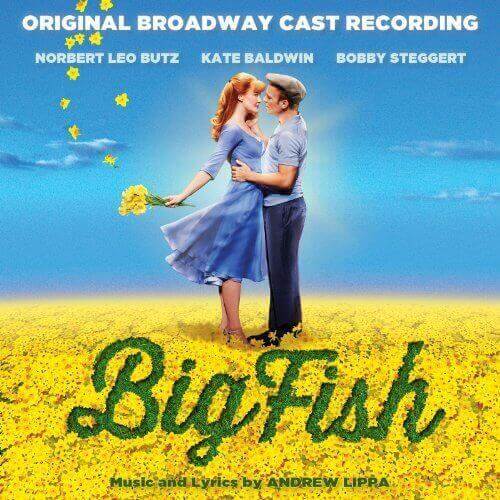 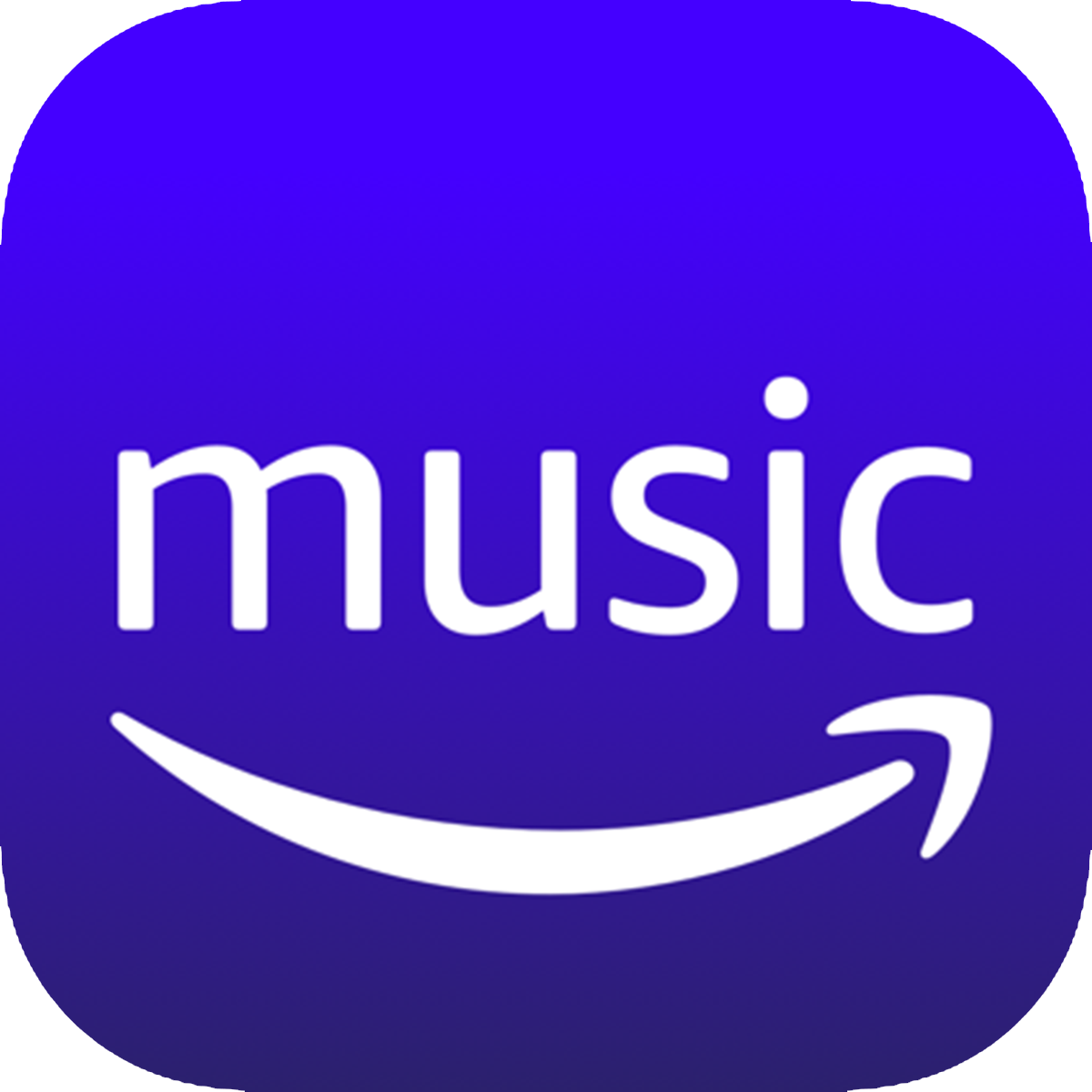 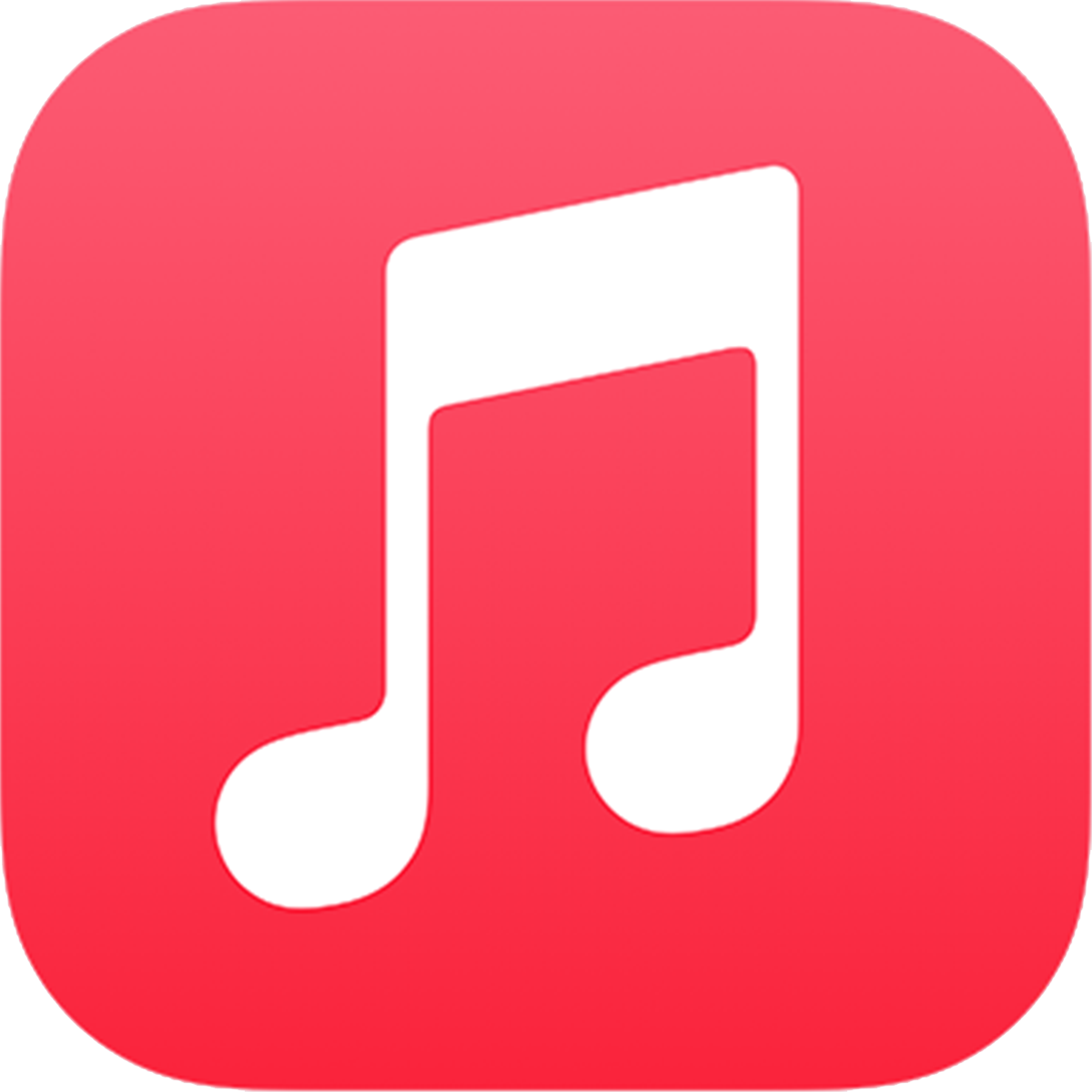 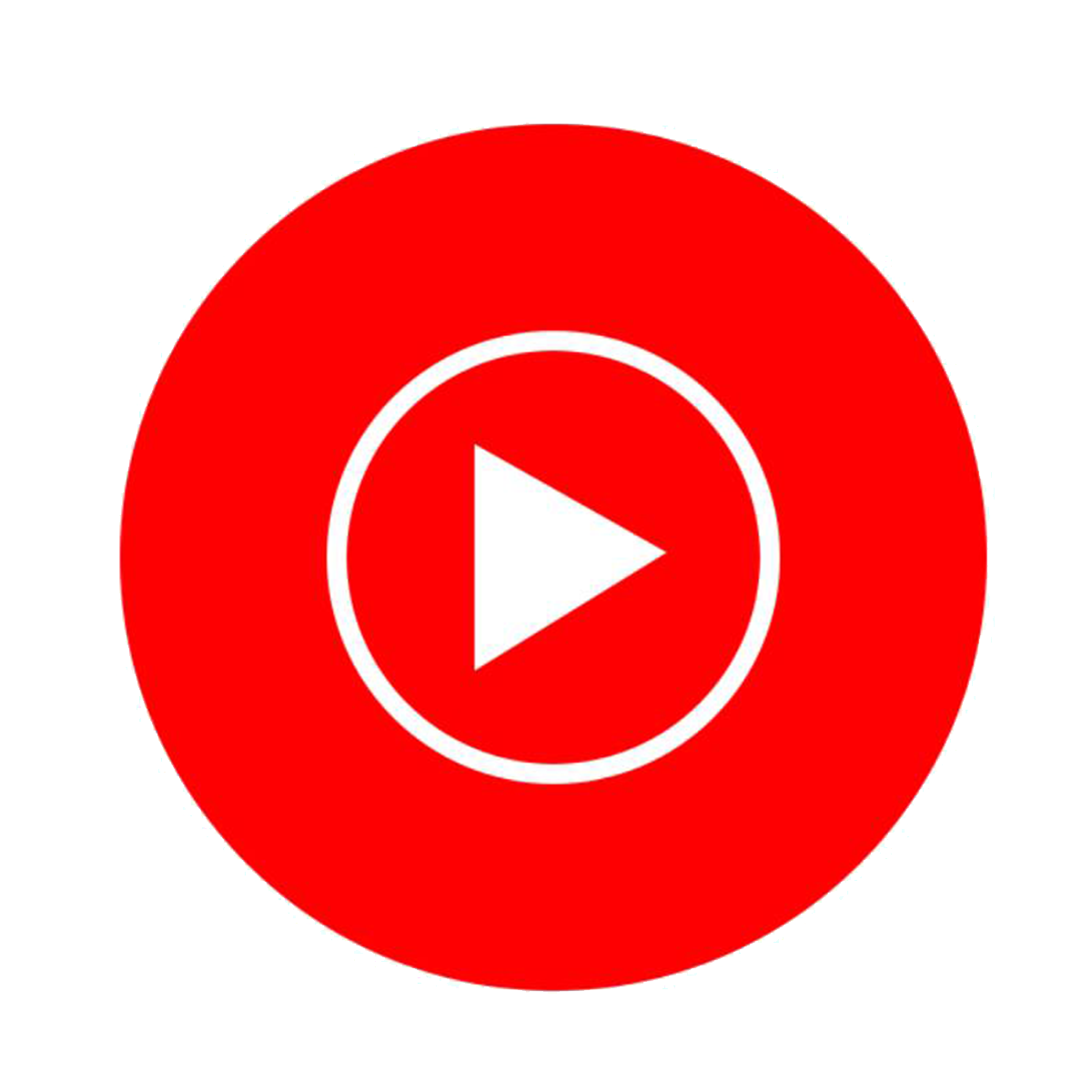 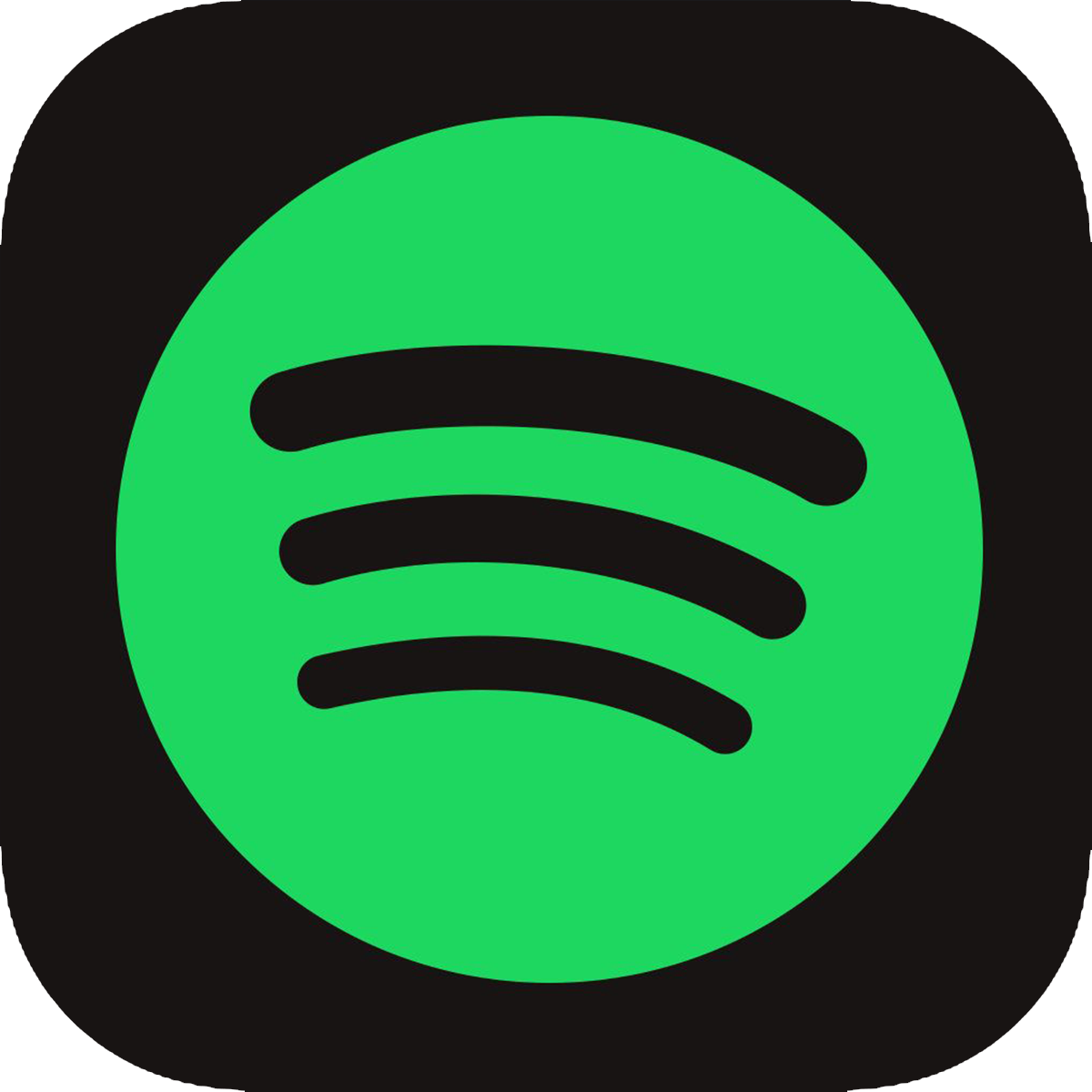