The Last Two People on Earth: An Apocalyptic Vaudeville

In the summer of 2012, I was happily remounting a production of The Producers at the Hollywood Bowl starring Jesse Tyler Ferguson and Richard Kind when my phone rang. I answered and to my surprise it was Mandy Patinkin and he was talking a mile a minute!

What I got from our conversation was that he had recently met a performer named Taylor Mac and they have been singing songs together and the sound of their voices blending together is thrilling and I must come hear them sing because an idea for a show could be somewhere in all this. I could not get a word in – I figured Mandy thought I would say, “No” right away so he kept talking and talking. Finally, he begged me to just listen to them sing and then make a decision. When he finally went quiet, I quickly said, “Of course, yes!” so I could hang up and get back to rehearsal.

I have to say, however, I was absolutely intrigued. And truthfully, I am such a fan of Mandy’s that he wouldn’t have to ask me twice to do anything!

When I returned to New York, I went to Mandy’s apartment and met with him and Taylor Mac. I had never met Taylor Mac before, but I knew of him as a downtown theater artist. I liked him immediately – he had a twinkle in his eye and a kindness about him. The three of us sat in a little room filled with music, CDs, albums, a piano, sound equipment. They began to sing and immediately I knew Mandy was right – the harmony of their voices was stunning. The sound was powerful, soothing, and exciting.

I was flattered and thrilled Mandy had called me, and now the thought of going into a studio – improvising and creating something guided only by their two unique personalities and the sound of their voices – excited me to no end.

We started meeting three nights a week at Nola Studios. We explored all the different songs they loved and began adding dance steps they could manage but would also be challenged by and, ultimately, conquer. Then came the conversation about how we should string it all together. Taylor, Mandy, the wonderful musical director genius Paul Ford, and I tossed around ideas while we ran around the room singing and dancing – I was in heaven!

The more time we spent together, the more I understood both Mandy and Taylor – their stamina, their dance skills, their likes and dislikes. Taylor has incredible comic-timing and was full of playful ideas. Sharing the same space with these two indomitable performers was an inspiration – the ideas came pouring out.

Before this, Hurricane Sandy had passed our way, destroying parts of New York City and bringing climate change to the forefront of everyone’s mind. We started playing with the notion of a Vaudeville piece that featured two characters who were polar opposites – one optimistic and gentle, the other crude and rugged. We would find these two strangers thrown together in a world ravaged by a storm of biblical proportions.

I called the set designer Beowulf Boritt and the costume designer William Ivey Long and told them I wasn’t sure what we were creating, but could I get a steamer trunk, an orange inflatable raft, Vaudevillian costumes in tatters, and a heap of survival gear? They agreed, of course, and suddenly our tiny rehearsal studio was packed wall to wall.

We came up with a shadow play to open the show, staged with help from the brilliant lighting designer Ken Billington. Mandy’s unmistakable silhouette appears, backlit onto a drop by a hard-edged spot. A windy storm blows in and steals his bowler hat and coattails.

The sound designer Daniel Gerhard created a magnificent thunderous soundscape that we hear as we watch a projection of water rise on the curtain. The sound settles, the lights shift, and a dilapidated theater covered in debris materializes.

At center stage sits a large, shabby steamer trunk. A nimble, hopeful survivor – Taylor – emerges, dragging an orange inflatable raft onstage as if he has just found land. The raft is filled with survival gear. Cautiously he opens the steamer trunk and discovers inside a hunched over, demoralized Mandy – clearly one man was ready for the storm and the other one wasn’t. Taylor cajoles Mandy out of the trunk, offers him a bowler hat and cane, and gently entices him into a soft-shoe.

The show is told without dialogue – the common language is song and dance. The drama is found in the juxtaposition of one tender soul against one wreck of a man. The world has been destroyed by polarization and in order to survive these characters must come to terms with, and tolerate, the other’s quirks and personalities. Their survival depends on their harmonies and their ability to move as one. When they start to dance is when they really begin to enjoy and trust one another.

Paul Ford is a walking library of music from all eras, and, because of that vast knowledge, our collaboration was fun and easy. Our concept gave us the opportunity to choose music from a variety of places – the Great American Songbook, Simon & Garfunkel, Rodgers & Hammerstein, Queen, Sondheim, as well as songs written by Taylor Mac.

The songs were chosen with the utmost care and with a direct nod to our apocalyptic storyline. We pulled from the world of musical theater – songs like “You’ve Got to Be Carefully Taught”, “Real Live Girl”, “Walking Happy”, and “Another National Anthem” – and from the pop catalogue – “Making Pies” by Patty Griffin, Randy Newman’s “Snow”, and R.E.M.’s “It’s the End of the World as We Know It (And I Feel Fine)”.

Creating a show like this with these extraordinarily smart and talented people using pure improve and theater games was unforgettable – one wishes we could all create theater this way.

Mandy and Taylor made fantastic Vaudevillians and I loved the journey of their improbable friendship. They found a way together as performers, and their characters came together to form an endearing relationship. It was a version of art imitating life. Their willingness to collaborate and try new physical comedy made my heart sing. I adored their nightly pre-show warm up, which was to go onstage before half hour and dance all their choreography in double time!

In the end, the piece was not only entertaining, but it made a statement about the plight of our planet and the hopes that music can heal a broken humanity. It is remarkably fulfilling to be a part of creating a piece that is provocative and makes an audience think. Wouldn’t it be great to believe that humankind could be saved with music?

If we do have to ultimately go out with an apocalyptic bang, I know I’d like to go out singing a song and dancing an old soft-shoe. 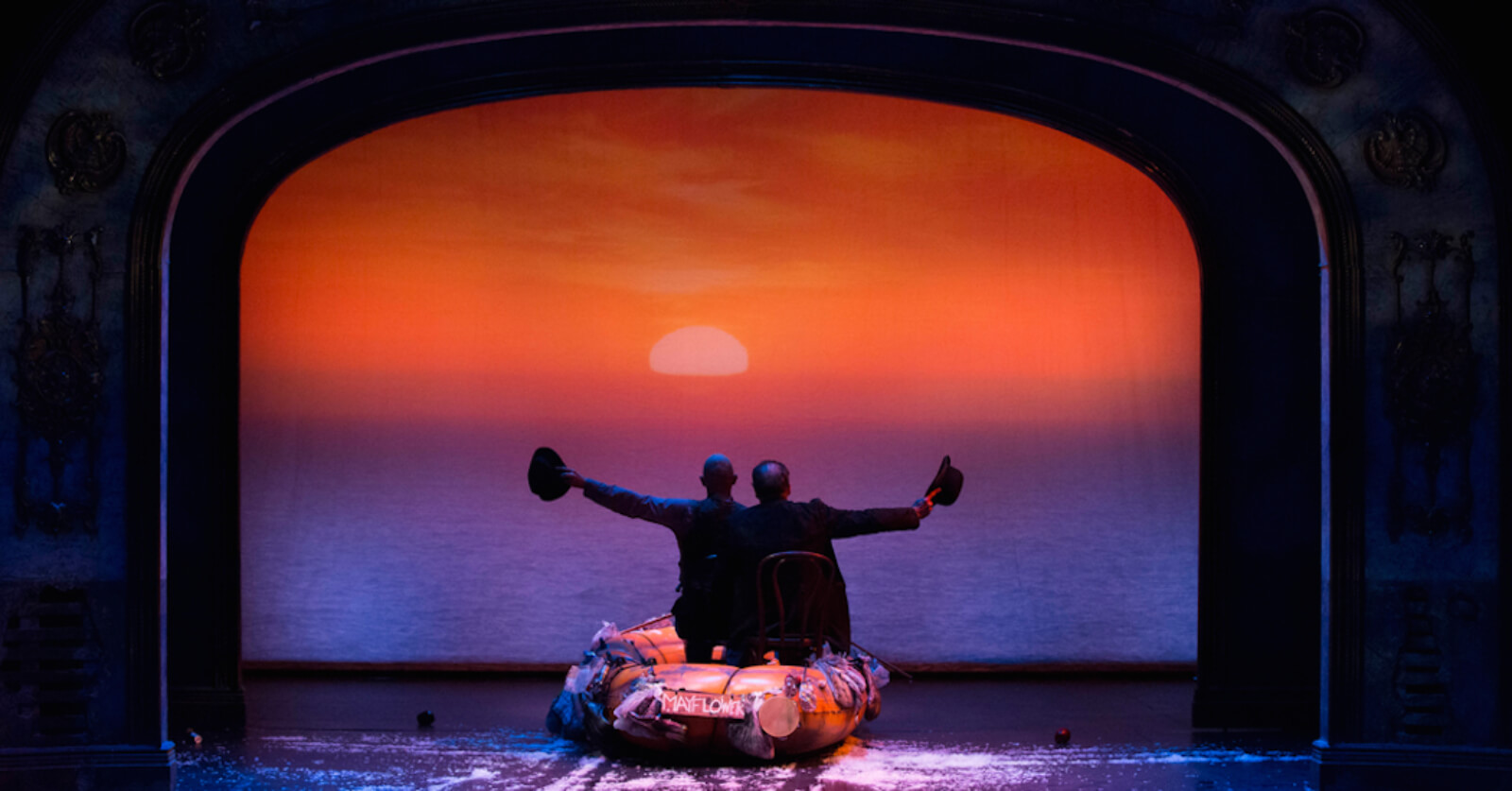 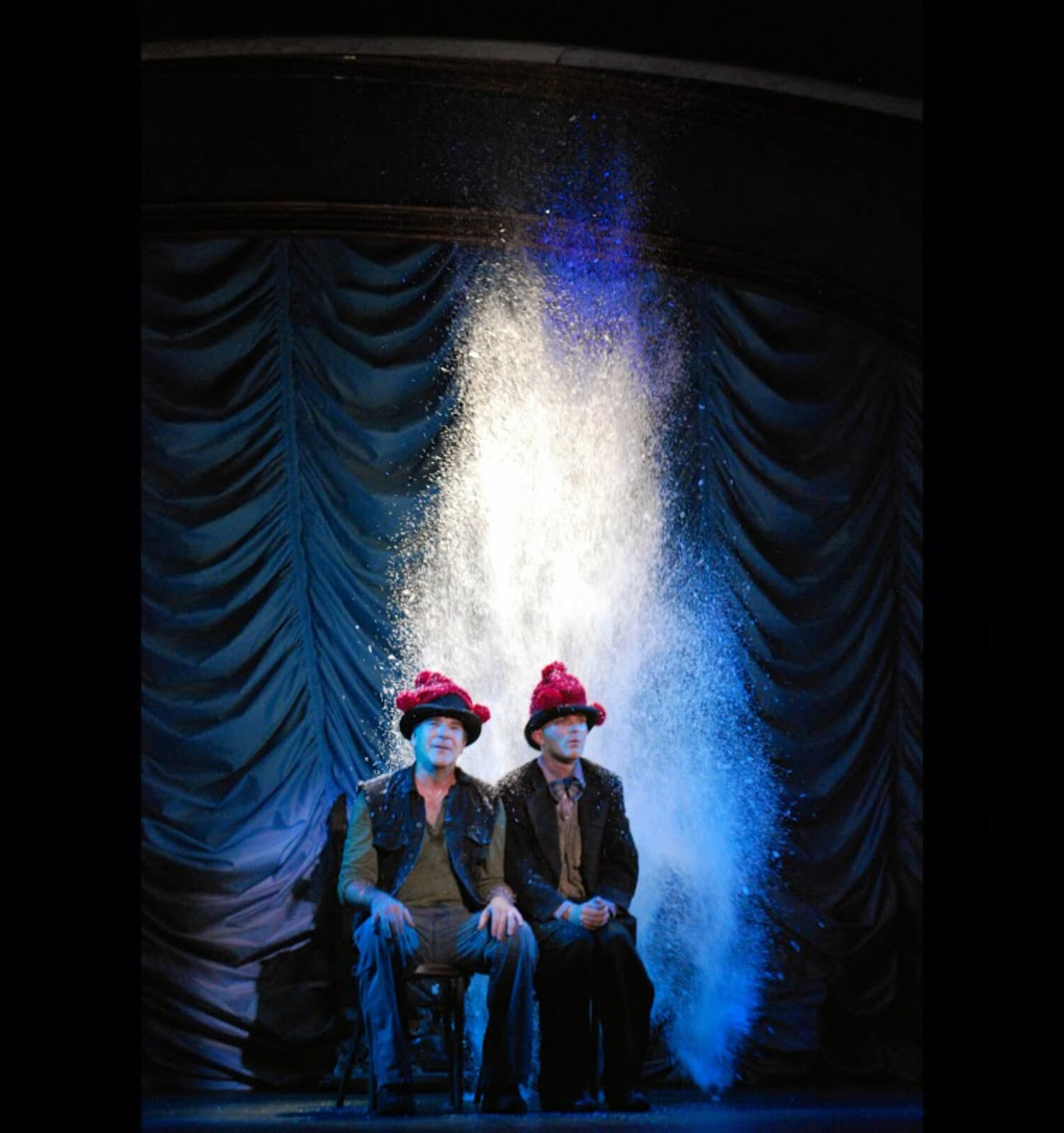 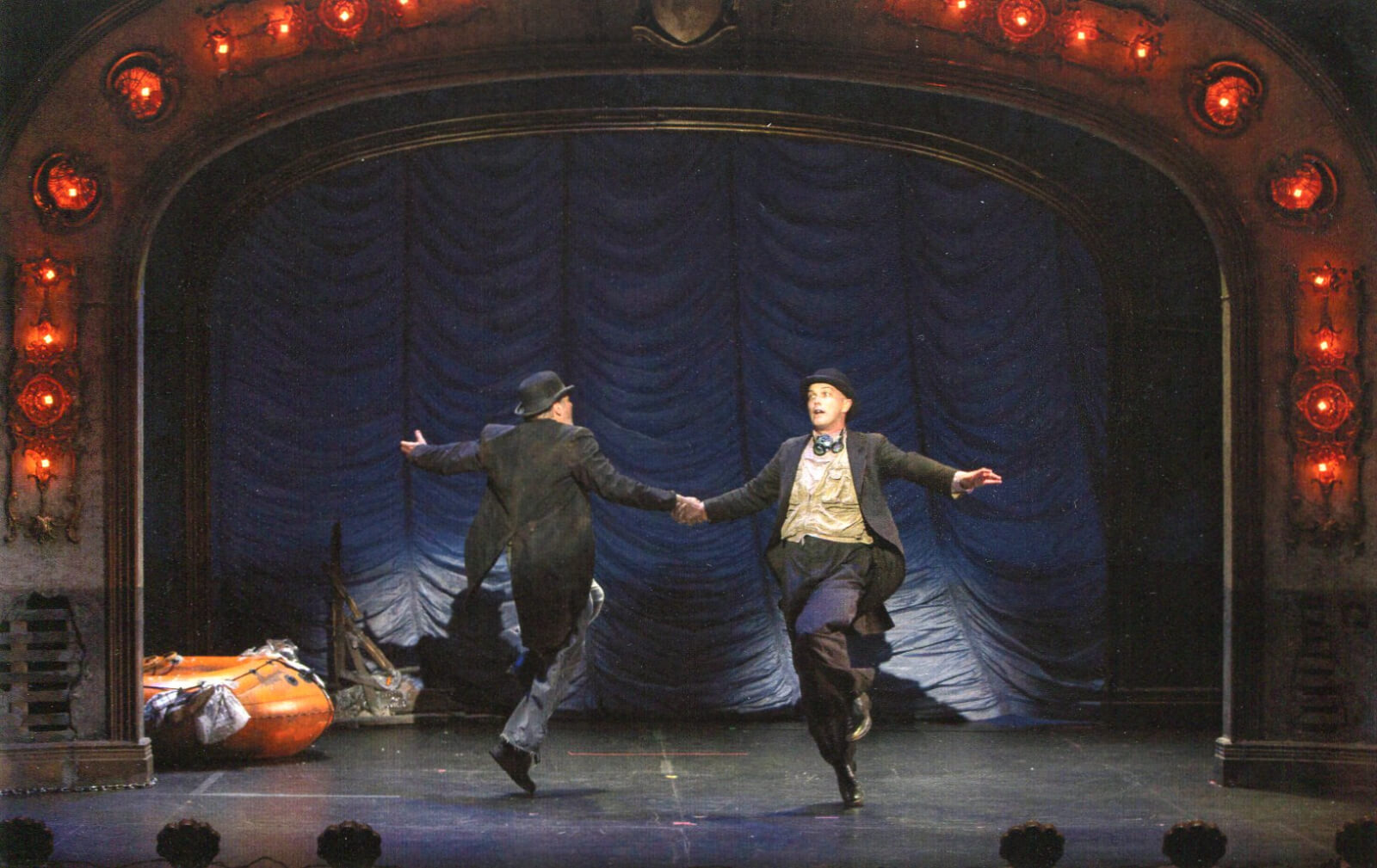 Mandy Patinkin and Taylor Mac dancing to "It's the End of the World As We Know It". 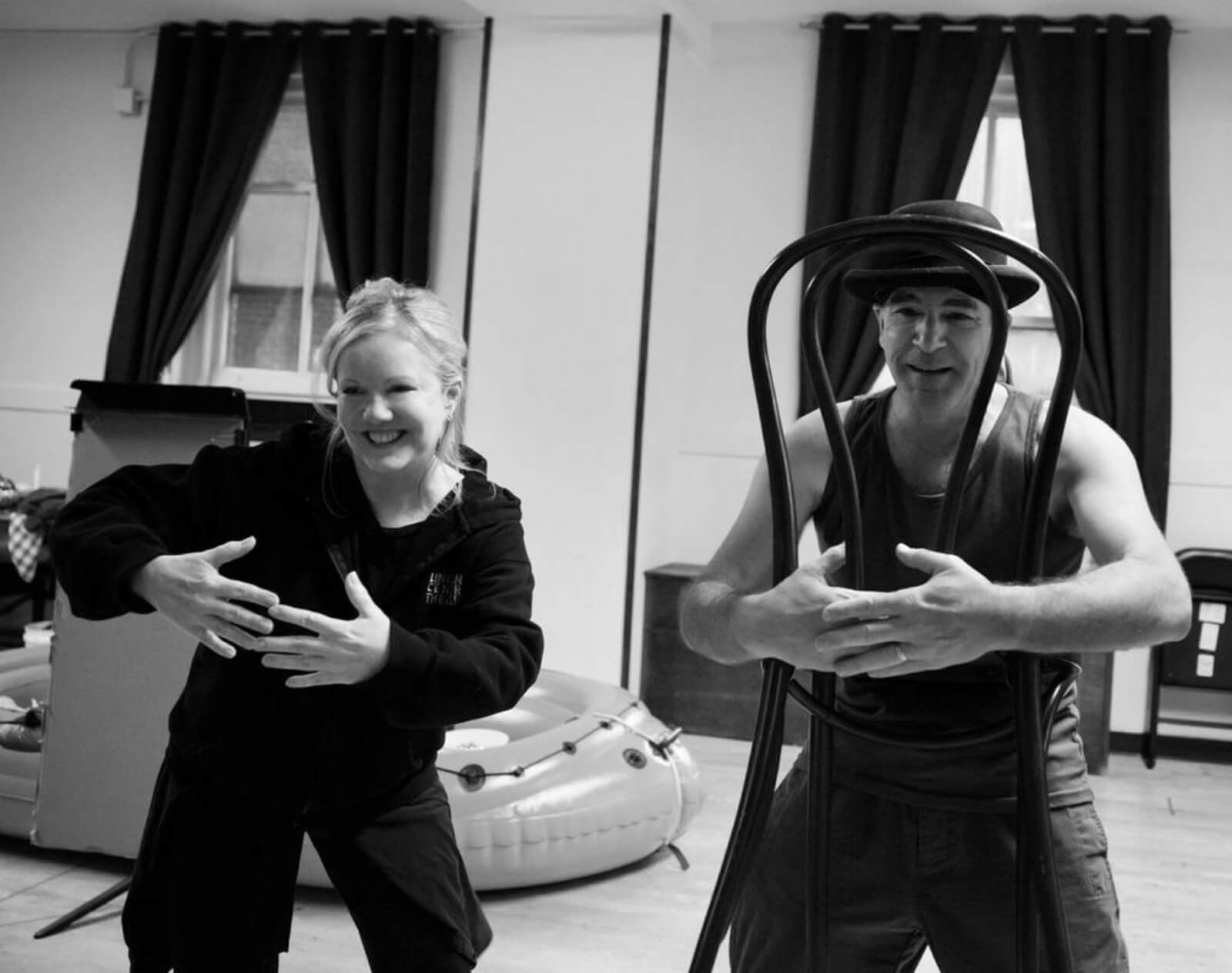 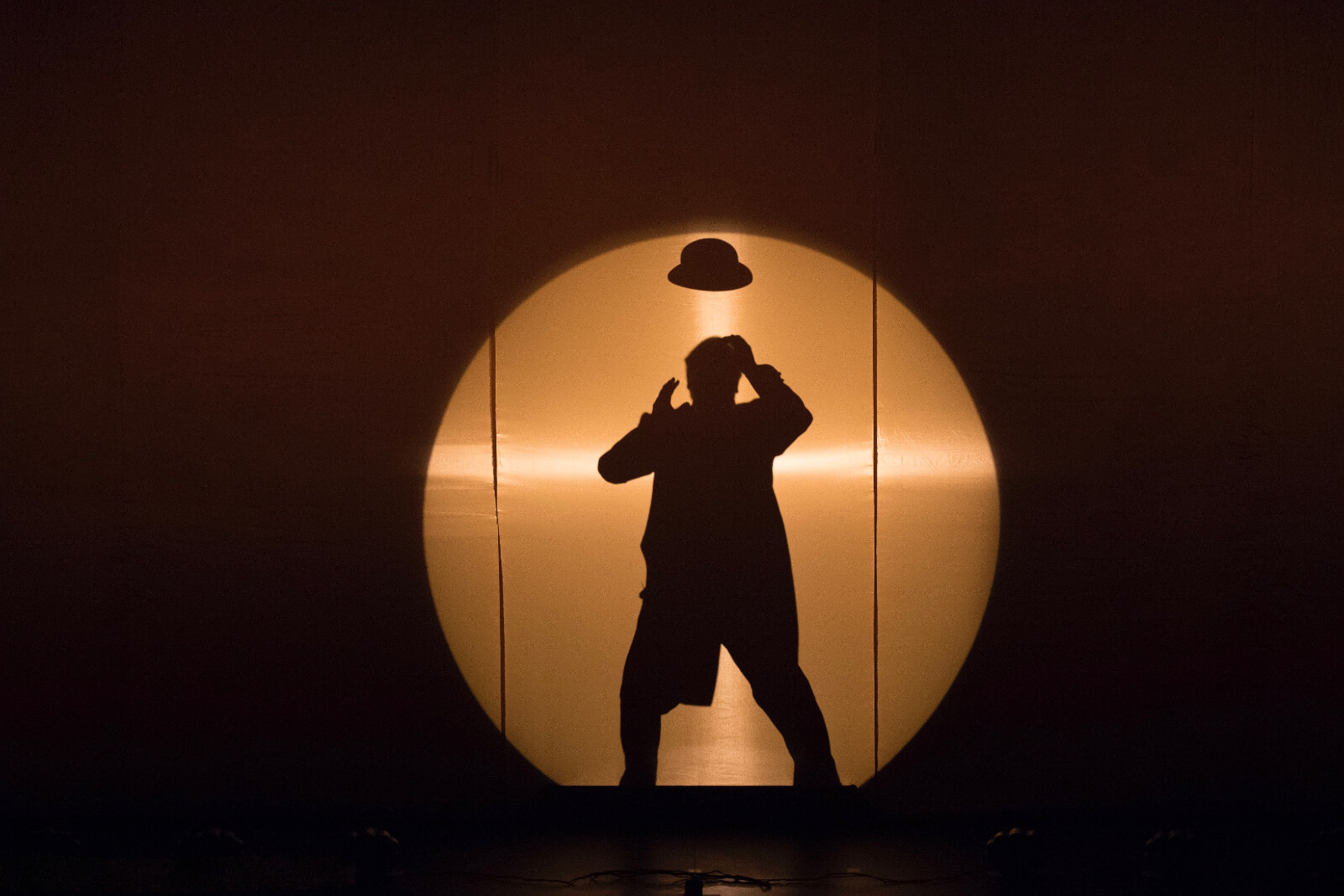 Mandy Patinkin's shadow in a hard edge spot with his hat floating over his head. 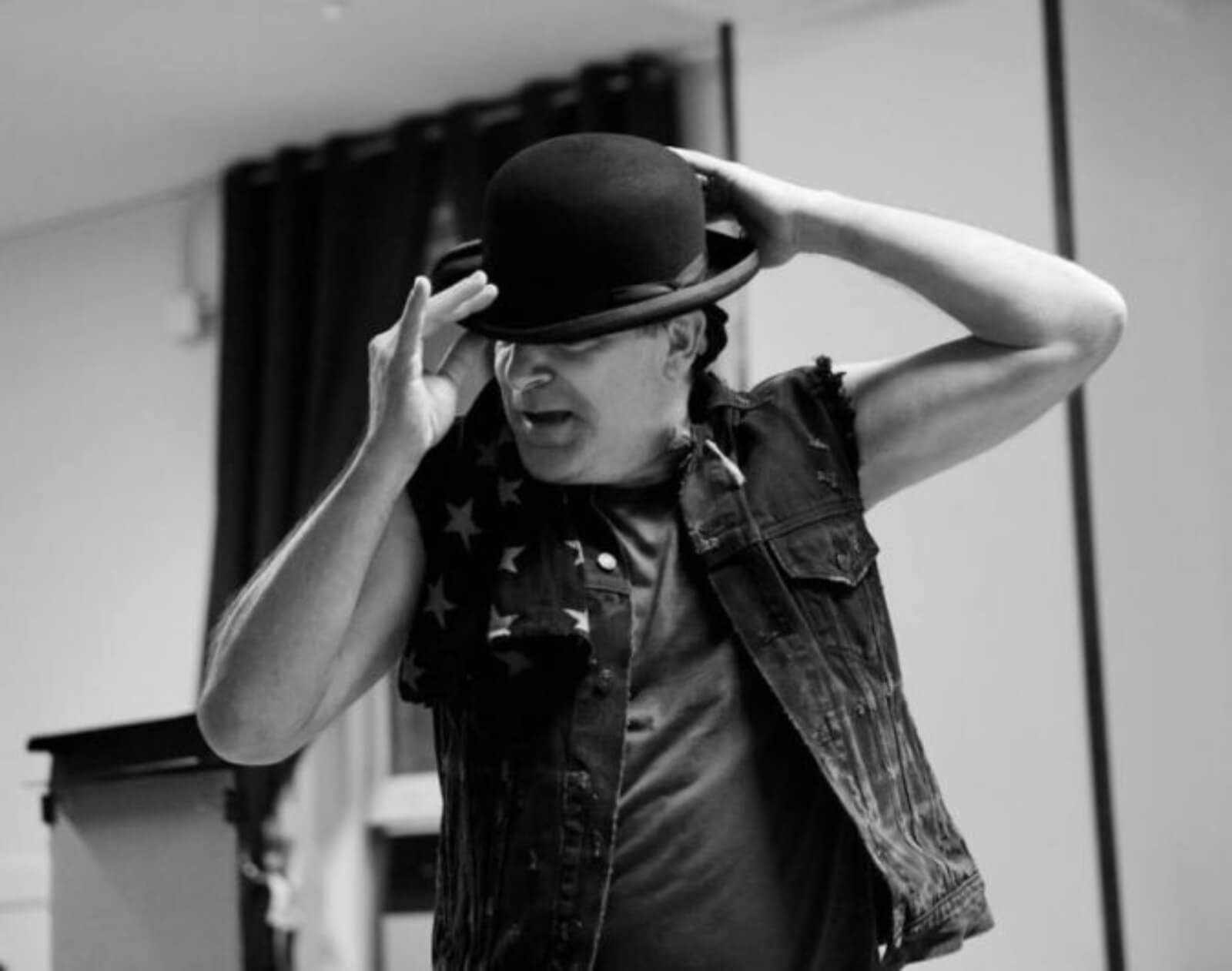 Logo of The Last Two People on Earth: An Apocalyptic Vaudeville. 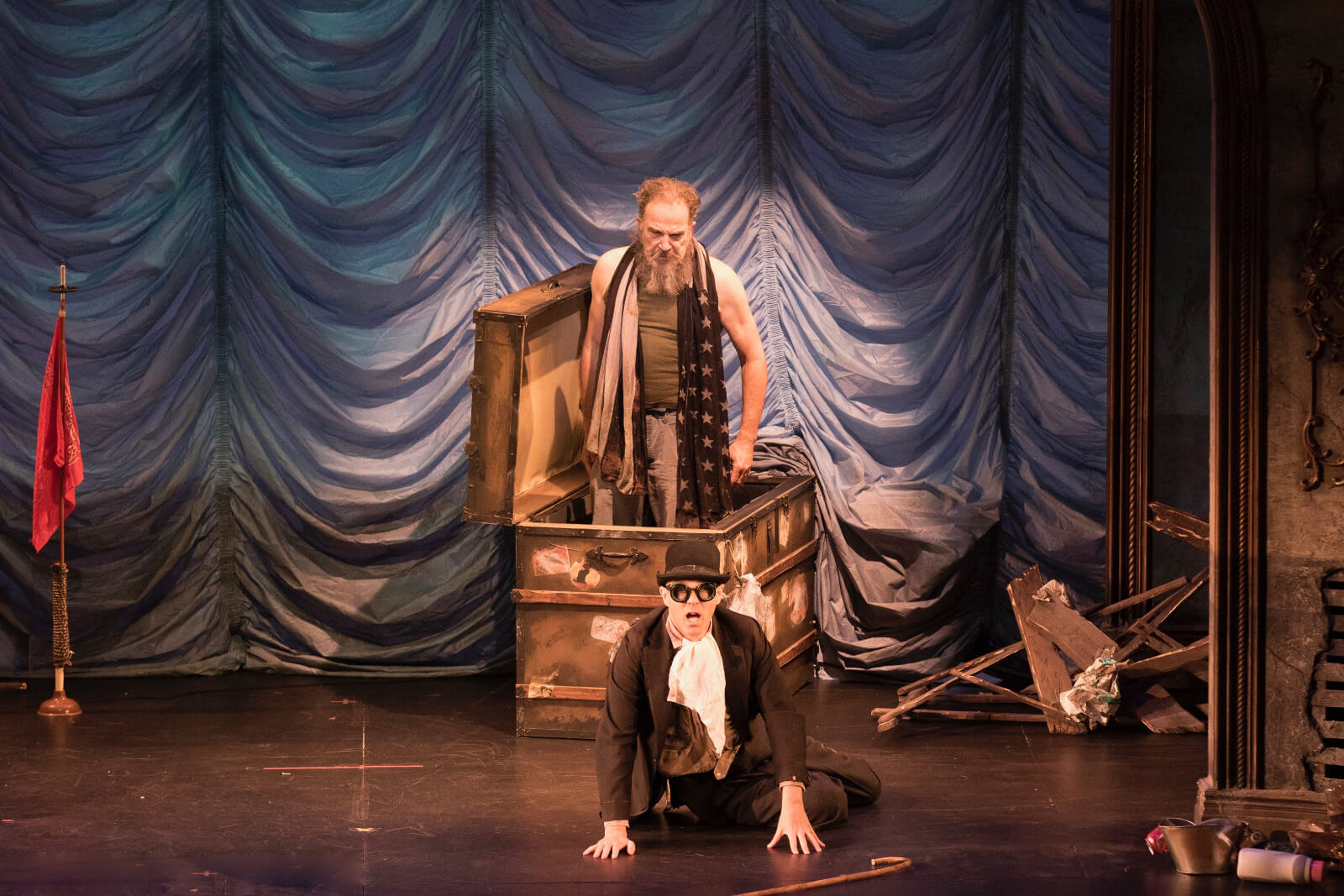 Mandy Patinkin and Taylor Mac in a scene from The Last Two People on Earth: An Apocalyptic Vaudeville. 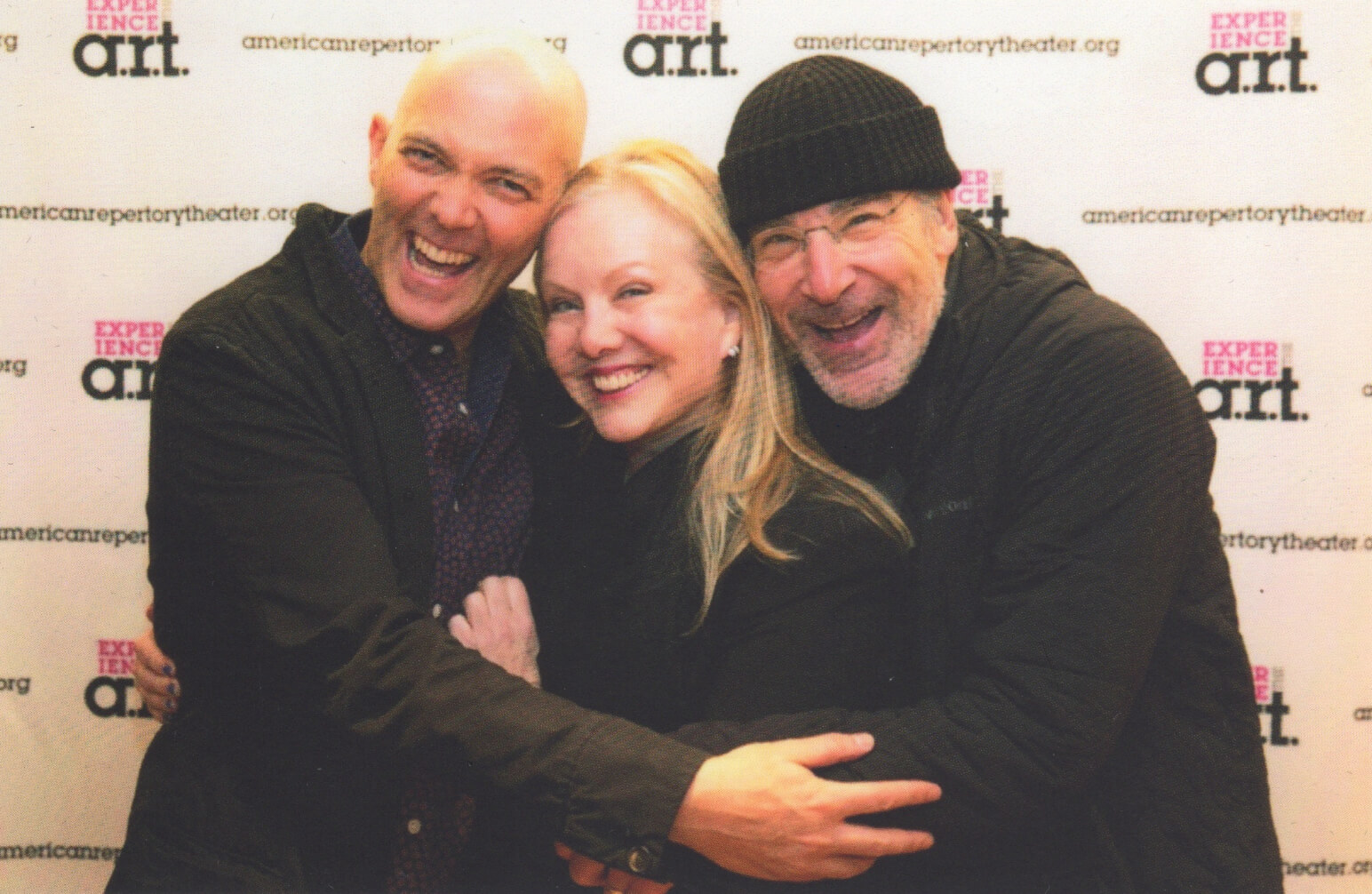 Taylor Mac, Susan Stroman, and Mandy Patinkin at the Opening Night of The Last Two People on Earth: An Apocalyptic Vaudeville at A.R.T. 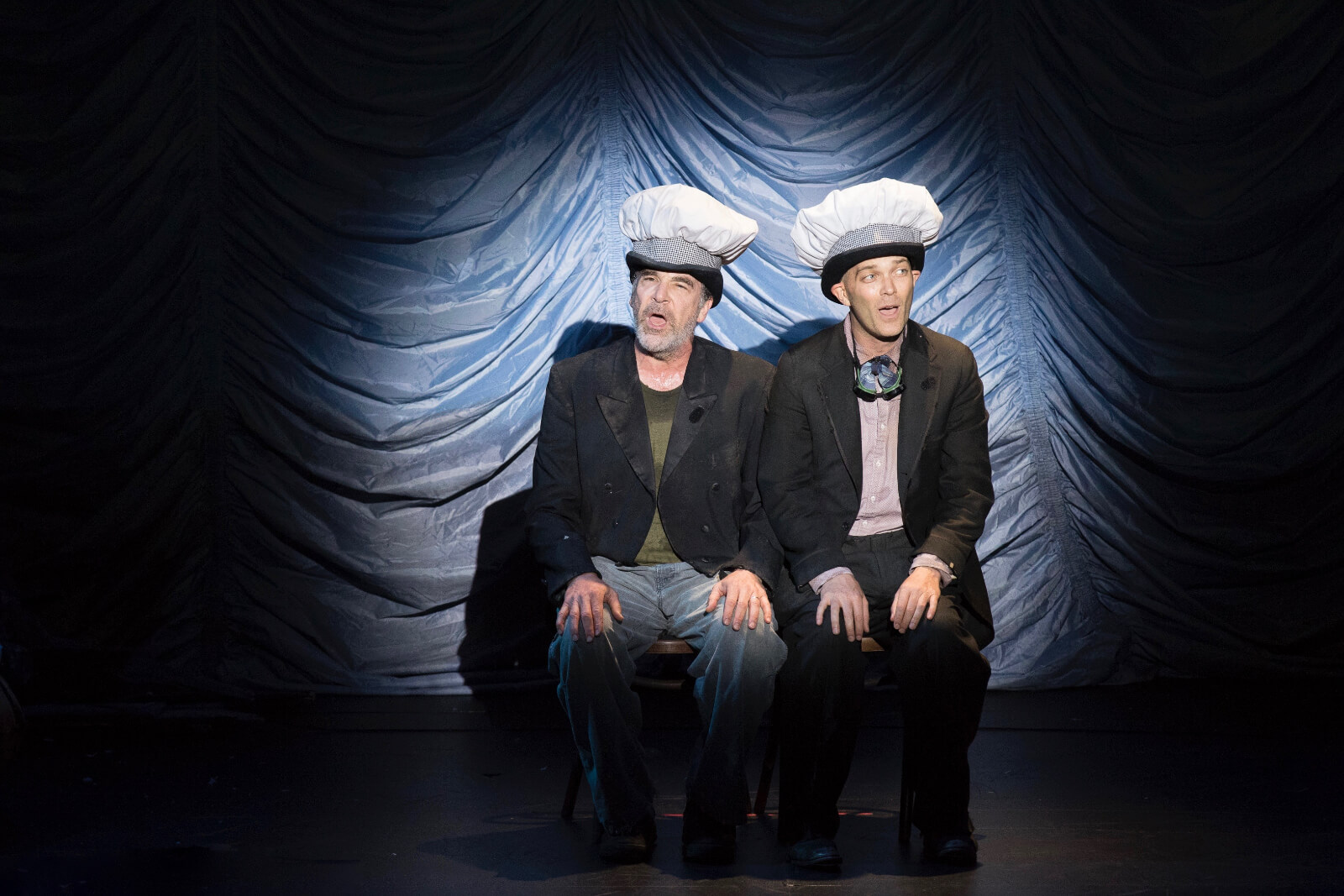 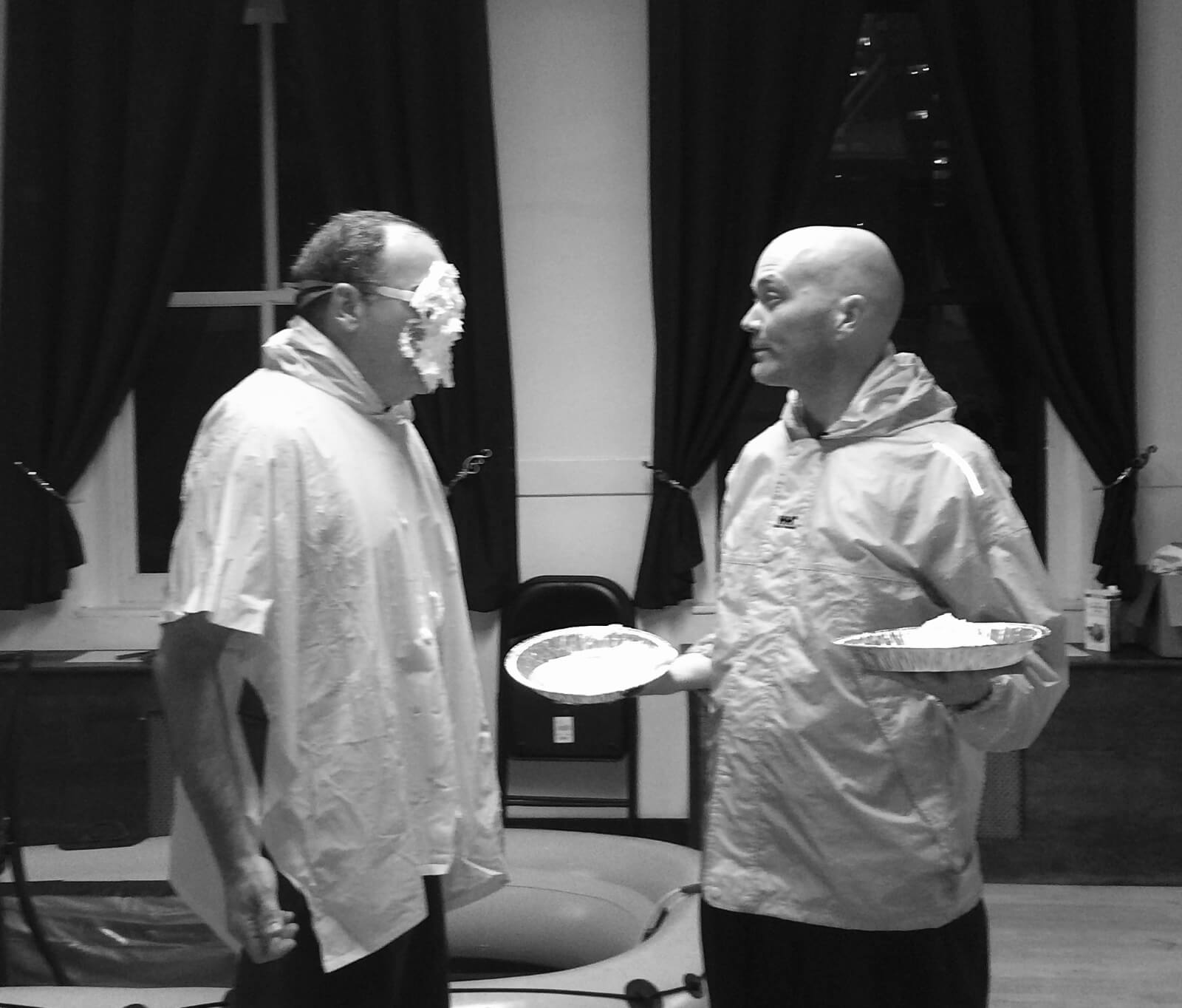 Mandy Patinkin and Taylor Mac rehearsing a scene with pies.

The Last Two People on Earth: An Apocalyptic Vaudeville

The Last Two People on Earth: An Apocalyptic Vaudeville premiered at Henry Street Playhouse on December 14, 2013. It opened at American Repertory Theater (A.R.T.) on May 12, 2015.