There have been many songs in my lifetime that I dream I might someday have the chance to choreograph. They stick with me and whenever I hear them, I imagine how I would translate that song into dance. That is true with the song “Take Five”.

“Take Five” was written by saxophonist Paul Desmond and recorded by the Dave Brubeck Quartet. Brubeck’s style was odd time signatures, improvised counterpoint, and distinctive harmonies. Brubeck asked Paul Desmond to write a song in 5/4 time. It was that time signature which intrigued me. I knew I was listening to something different – it was addictive.

I first heard the album Time Out by the Dave Brubeck Quartet around the age of eight, and I listened to that record for years until I completely wore it out. My older brother Corky, who had a great ear for jazz, had it in his collection and I gravitated to it even as a young child. I remember Corky saying, “This is the first jazz album to sell a million copies!” That seemed like a lot to an eight-year-old girl.

Other songs on that album I adored were “Blue Rondo à la Turk”, which has an unusual rhythm that consists of three measures of 2+2+2+3 and one measure of 3+3+3 then repeats, and “Strange Meadow Lark”, a beautiful ballad that starts with a piano solo and moves into a 4/4 swing. Both written by Dave Brubeck. This music was a big part of my life growing up, and now, hardly a day goes by when I don’t listen to jazz.

I received a call from the incomparable Peter Boal, former principal dancer with New York City Ballet who had been recently appointed as Artistic Director of Pacific Northwest Ballet. Peter was putting together the program for PNB’s “Laugh Out Loud!” Festival. He was commissioning choreographers to create an evening of spirited, witty pieces designed to entertain.

I was honored that he would call me. I knew PNB had a wonderful reputation for top-notch dancers, and I also knew Peter was doing a magnificent job running the company. Right away I accepted and said I would have a think about the music.

I didn’t have to think very long. Here was my opportunity to finally choreograph to those Dave Brubeck songs I loved so much. “Take Five”, “Blue Rondo à la Turk”, and “Strange Meadow Lark” – you couldn’t get more entertaining than that!

The phrase “take five” has always interested me. It asks you to stop working and relax for a bit. And while that might be true in the world outside of the arts, artists never really “take five” – they are always thinking, always moving, always playing. Many times, I have told a band to stop playing, and, inevitably, the pianist starts noodling some other tune. Or a dancer starts practicing another step. Or an artist starts doodling on another piece of paper. Unless you put food in front of an artist, they won’t stop. That was the essence of how I found my way into the piece.

The lights come up on a ballerina (Noelani Pantastico) sitting on the stage. She raps her fingers on the floor, looking bored. She has been told to “take five.” The sound of her fingers rolling on the deck are mimicked by the drummer on a wood block. She stands, looks around. Still bored, taps her hands on her thighs, the movement mimicked by the snare drum. She looks around once more, does a take downstage and smiles a big smile, a move matched by the triangle, and then she’s off! She begins dancing to “Blue Rondo à la Turk” with quick footwork and splendid musicality. She is soon joined by the other dancers who equally have trouble sitting still.

Dancing en pointe in exact rhythm can be very difficult for some classical dancers. Not this group. Counting it out was important, and quite impossible at times, but it was necessary so they could learn to dance in the pocket of the rhythm instead of through the music – that is, to dance on top of the beat. They were up for the challenge and seemed to love doing rhythm ballet.

Before I left for Seattle, I took the recorded music to a talented Pro Tools Operator, Missy Cohen. Using Brubeck’s original arrangements, we explored how to piece together the three songs and added hits in certain places where I knew the choreography had to be supported musically. When we finished, I had a 15-minute piece of Dave Brubeck heaven. I could not wait to set it on the dancers.

When I started choreographing with the company, we danced to the track I had created back in New York City. We didn’t have the ability to slow it down like we would have if we were working it out with just a piano, but the dancers were quick and smart and could adapt to the fast tempo. I then delivered the track to the enormously talented orchestrator, Doug Besterman. Honoring the sound of Brubeck, he made the piece soar with the spectacular fifty-piece orchestra. What a thrill hearing those tunes played by so many musicians.

The artist Henri Matisse went through a period in his work in which he used cut forms from painted paper to create abstract collages and decoupage, eventually known as “cut-outs”. Utilizing this method and combining the excitingly vibrant color plates with his own written thoughts, he produced the book Jazz. The end result looked like musical improvisation – indeed Matisse felt it was the visual counterpart to jazz music.

I was very familiar with Matisse’s work, as was costumer William Ivey Long. He took the colors from Matisse’s Jazz palette and designed beautifully elegant costumes that moved right along with the dancers. Randall G. Chiarelli, PNB’s hugely gifted lighting designer, made terrific contributions to the different music tempos with added Matisse-inspired projections.

The company was extraordinary. They took to the jazz music and infused it with personality and wit. Peter Boal told me one of his dancers, Jeffrey Stanton, was a tap dancer. I created a section of soft shoe flirtation for him and the seductive Lesley Rausch. She was dressed in vivid Jazz purple and Jeffrey sported a fedora, dressed in black with a Matisse-inspired star on his lapel.

The beautiful prima ballerina Miranda Weese, dressed in Jazz blue, danced to the lyrical and haunting “Strange Meadowlark”. She floated over top a group of dreaming dancers.

In Jazz red was Kari Brunson. She tantalizingly danced and kicked to the famous drum solo in “Take Five”, making it look as if she was in control of the drummer and every one of his hits.

Noelani, in Jazz yellow, was the swing spirit that danced throughout the entire piece. She lit up the stage whenever she entered and added comedy to the lovelorn moments she found herself without a dance partner. At the end of the number, she is raised high into the air and mimes Joseph Morello’s famous drum lick.

This was one of those rare moments when everything I loved in art came together – jazz music, visual arts, and an exemplary ballet company that not only delivered what I had imagined but were inspiring to work with. Jazz is like freedom with discipline and that’s the way they danced it – with full freedom.

I will always be grateful to Peter Boal for making that call. It’s nice to know if he planned on having a "Laugh Out Loud!" Festival, he thought of me. That makes me smile. 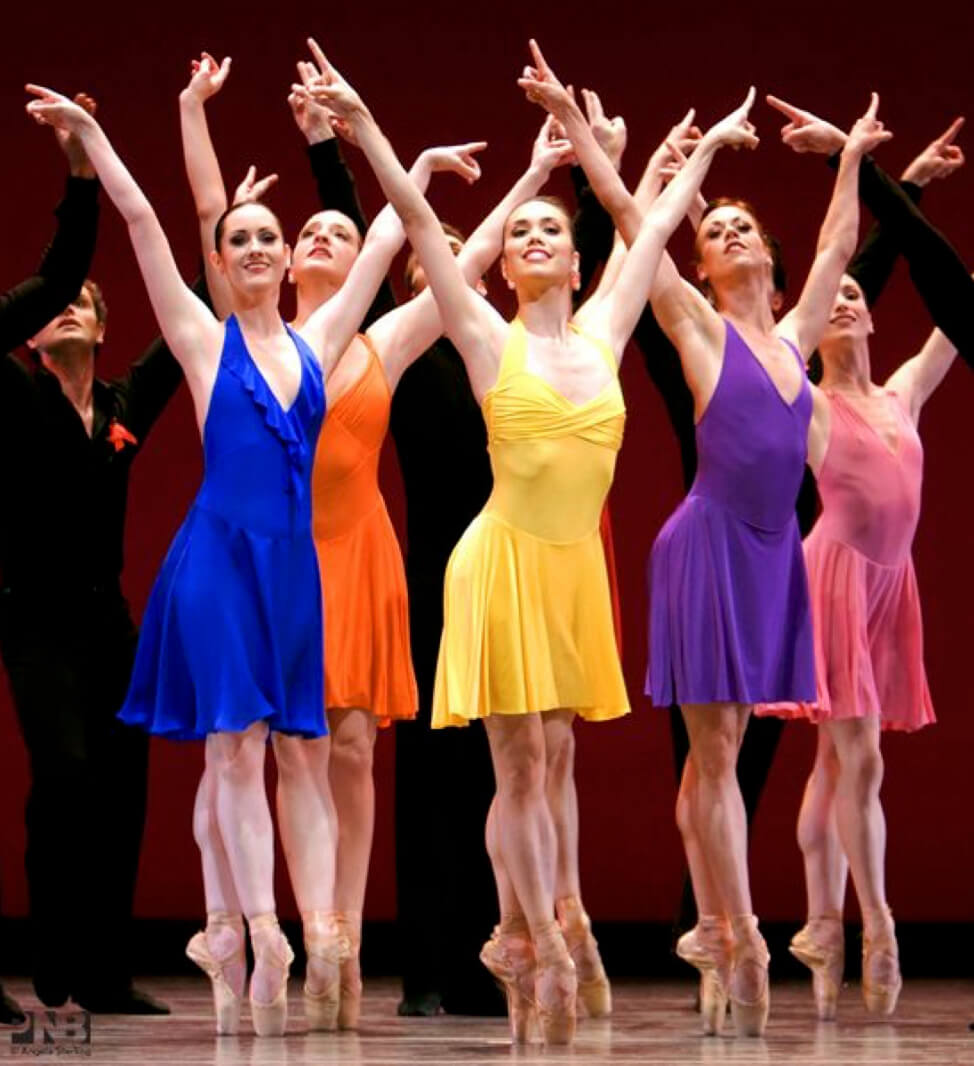 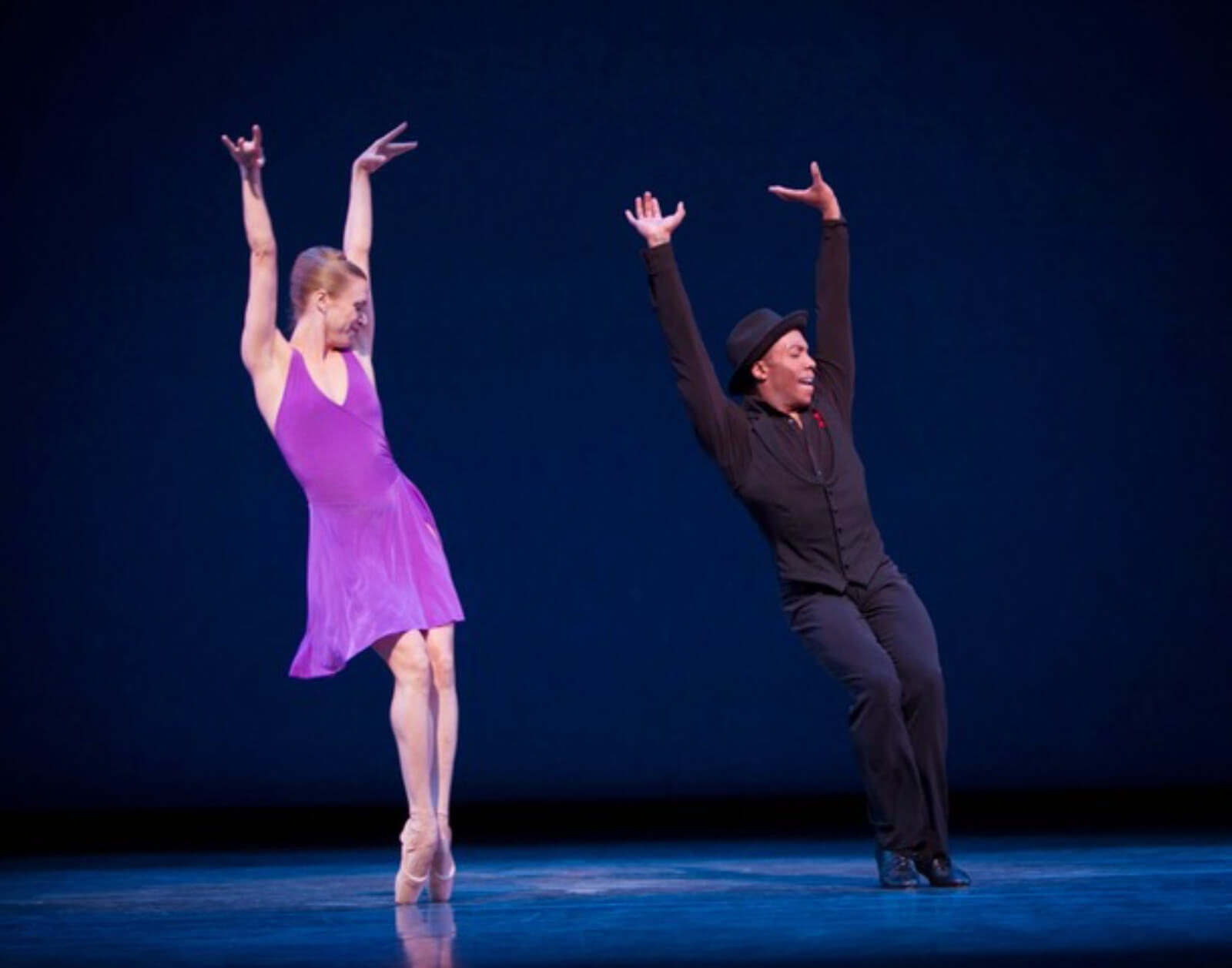 Lesley Rausch and Kiyon Gaines in Take Five...More or Less. 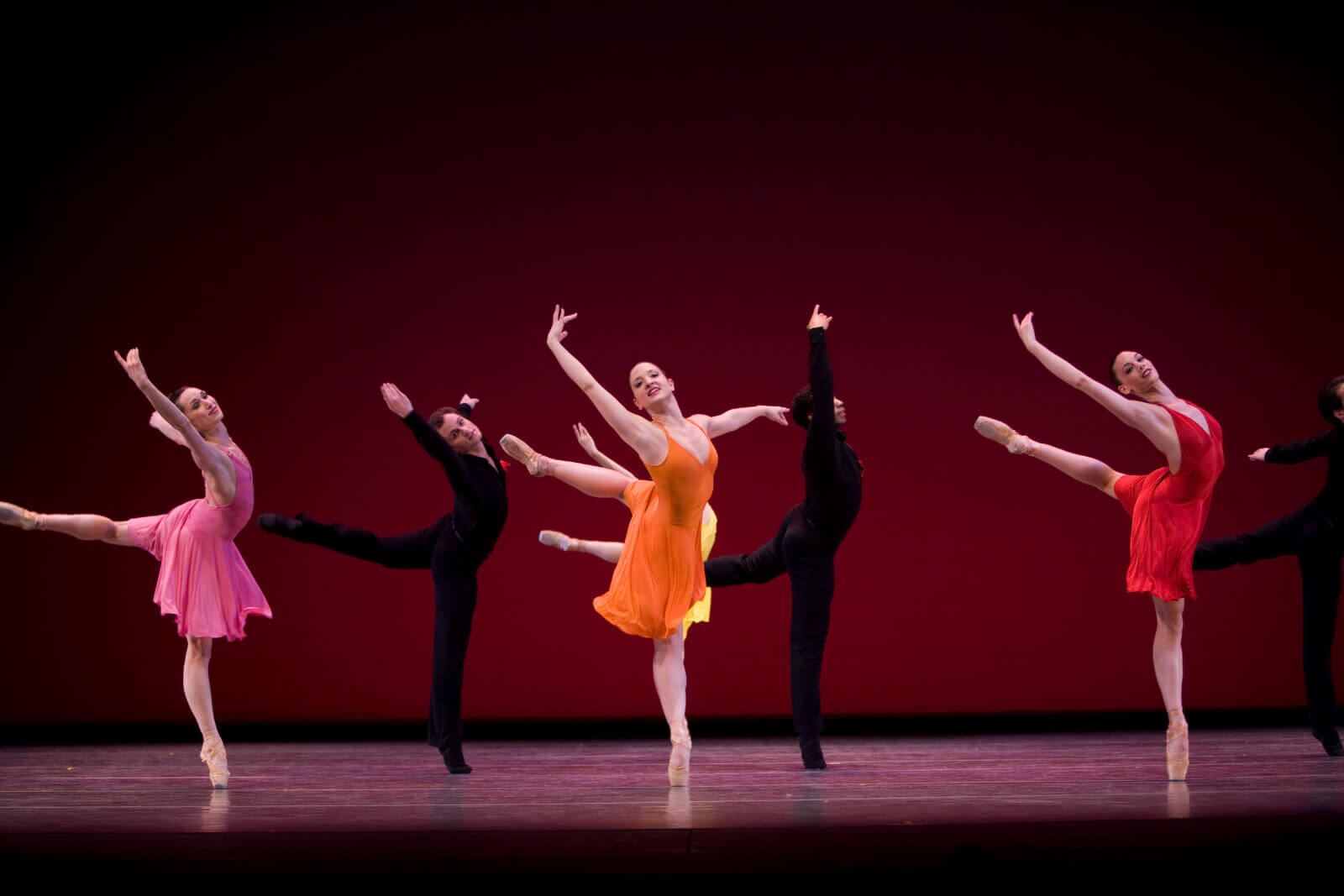 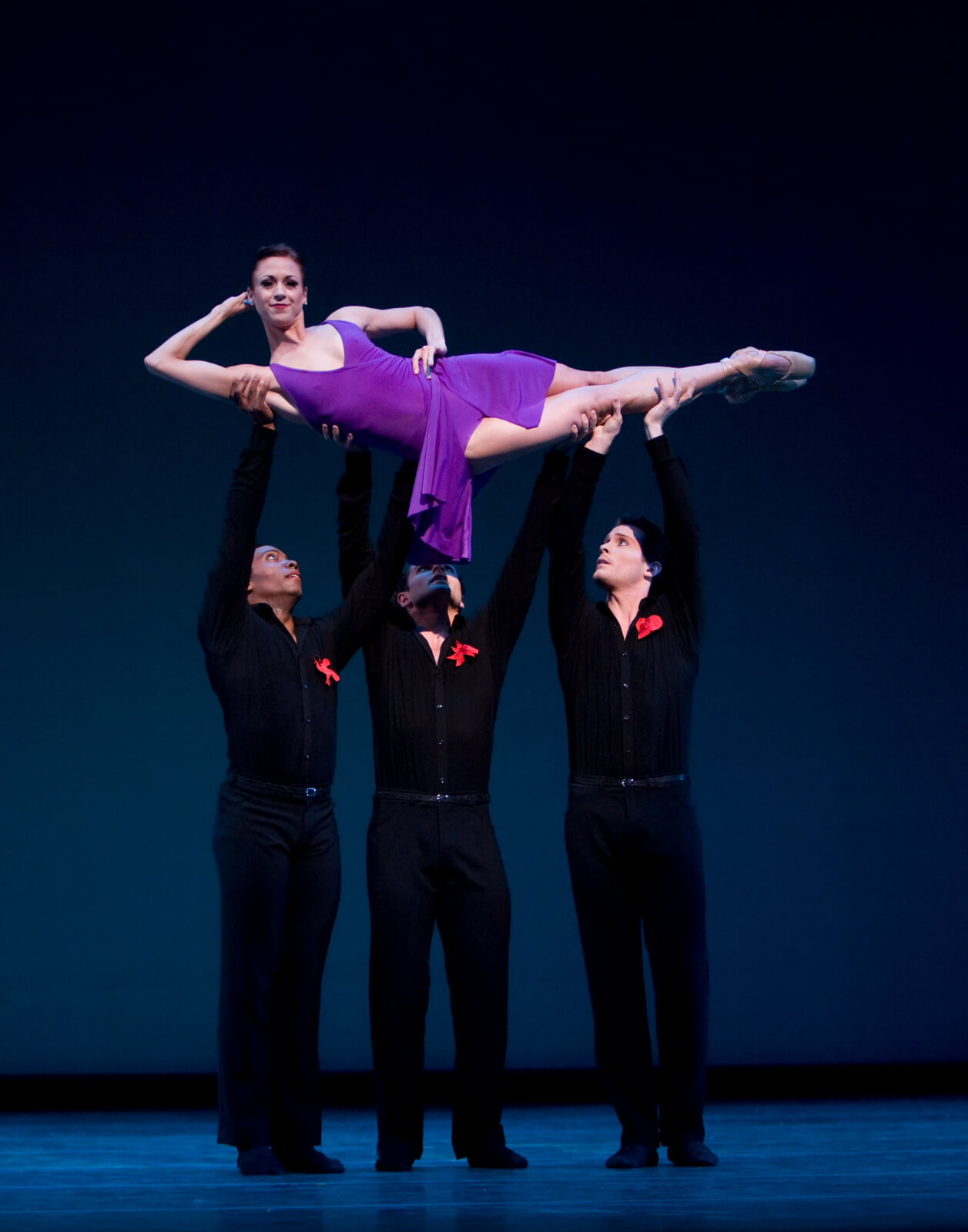 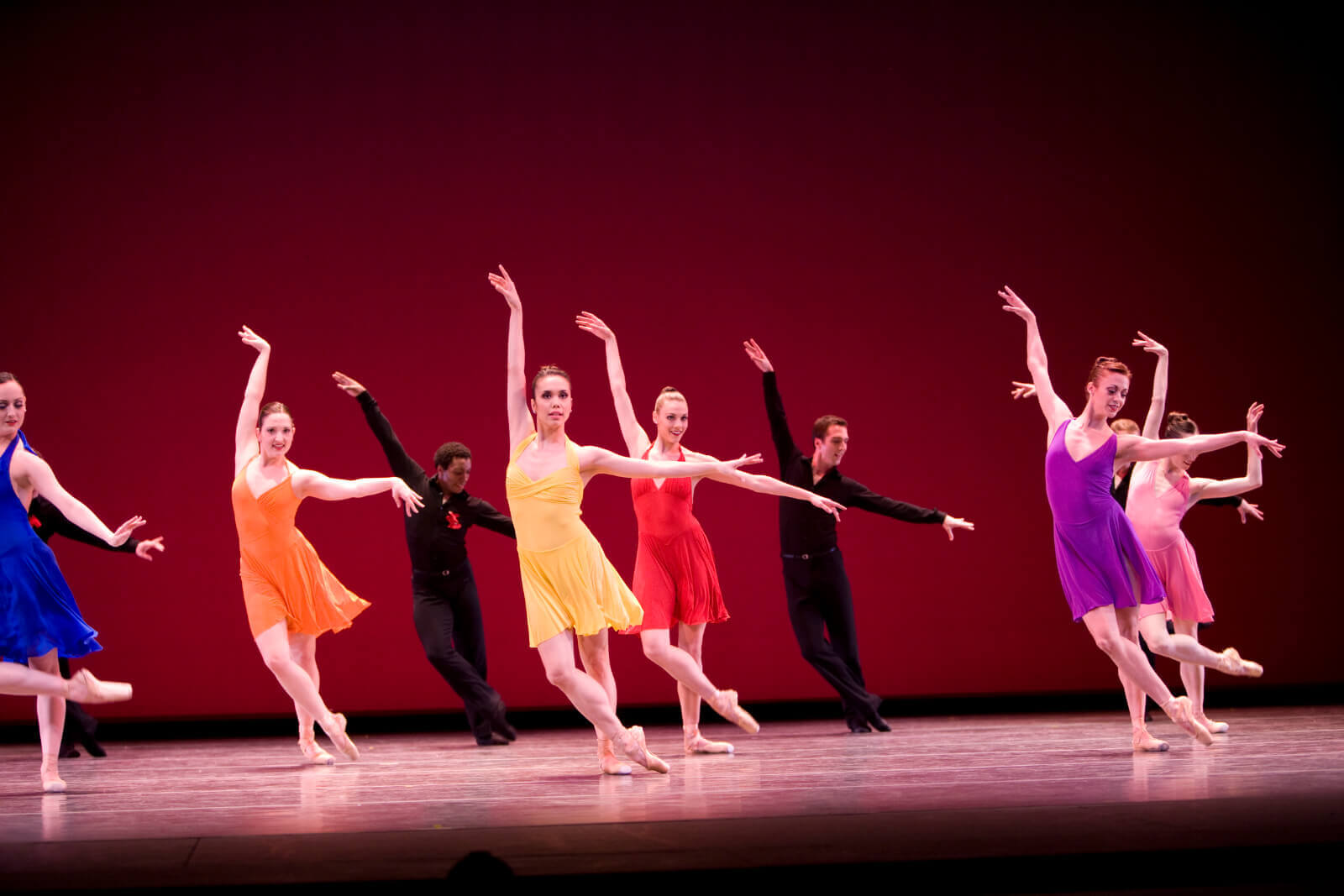 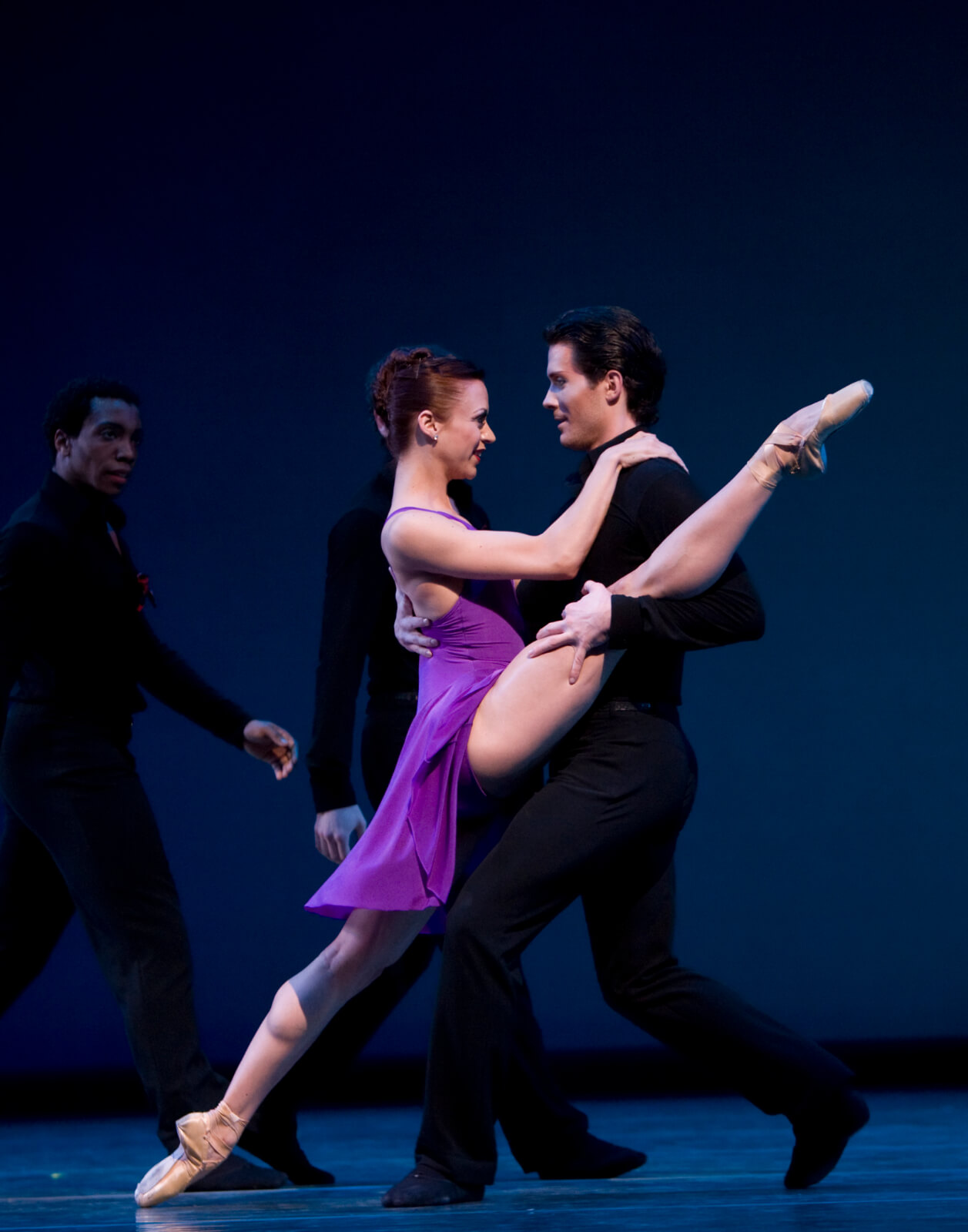 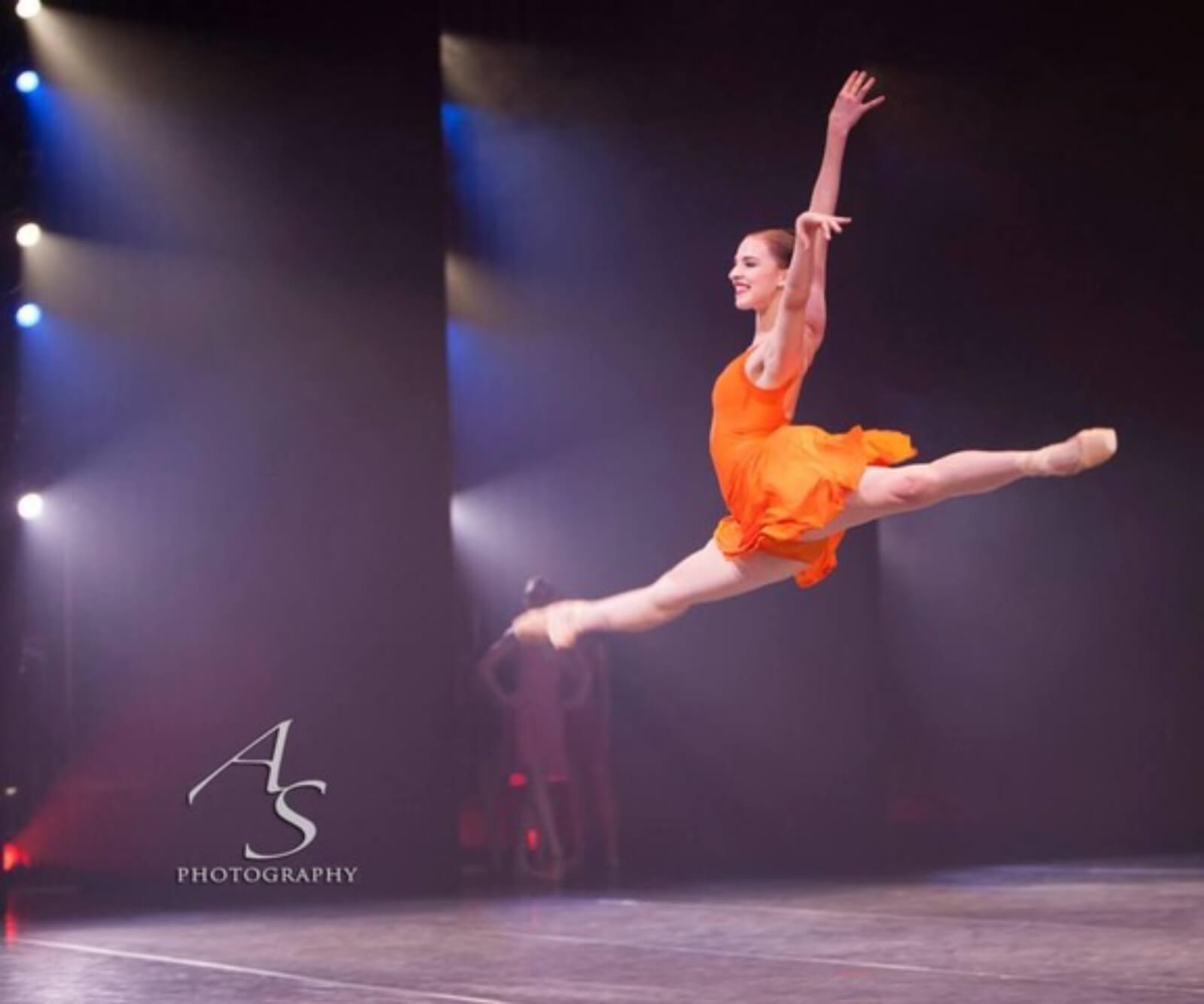 Chelsea Adomaitis leaping into the wings. 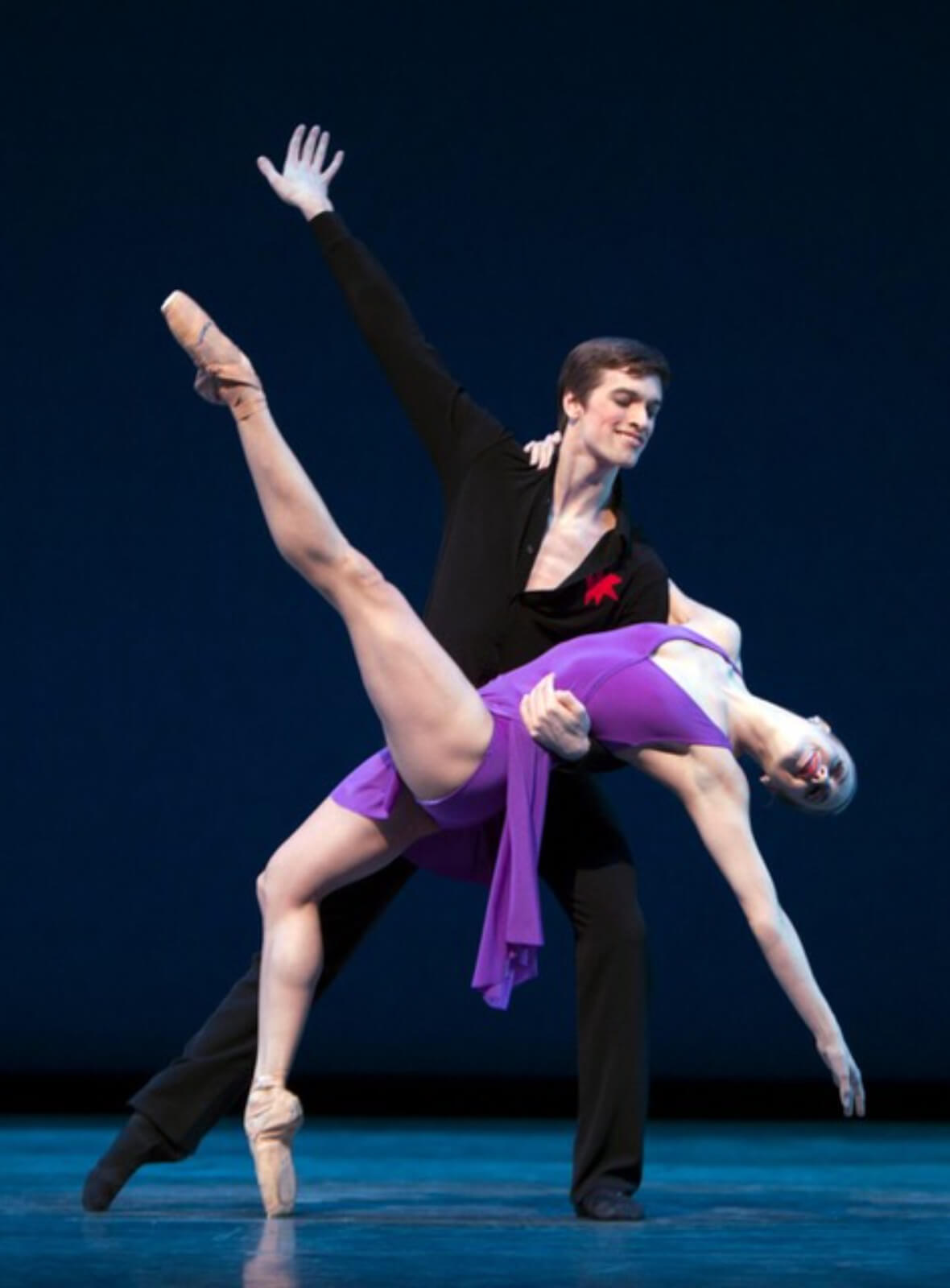 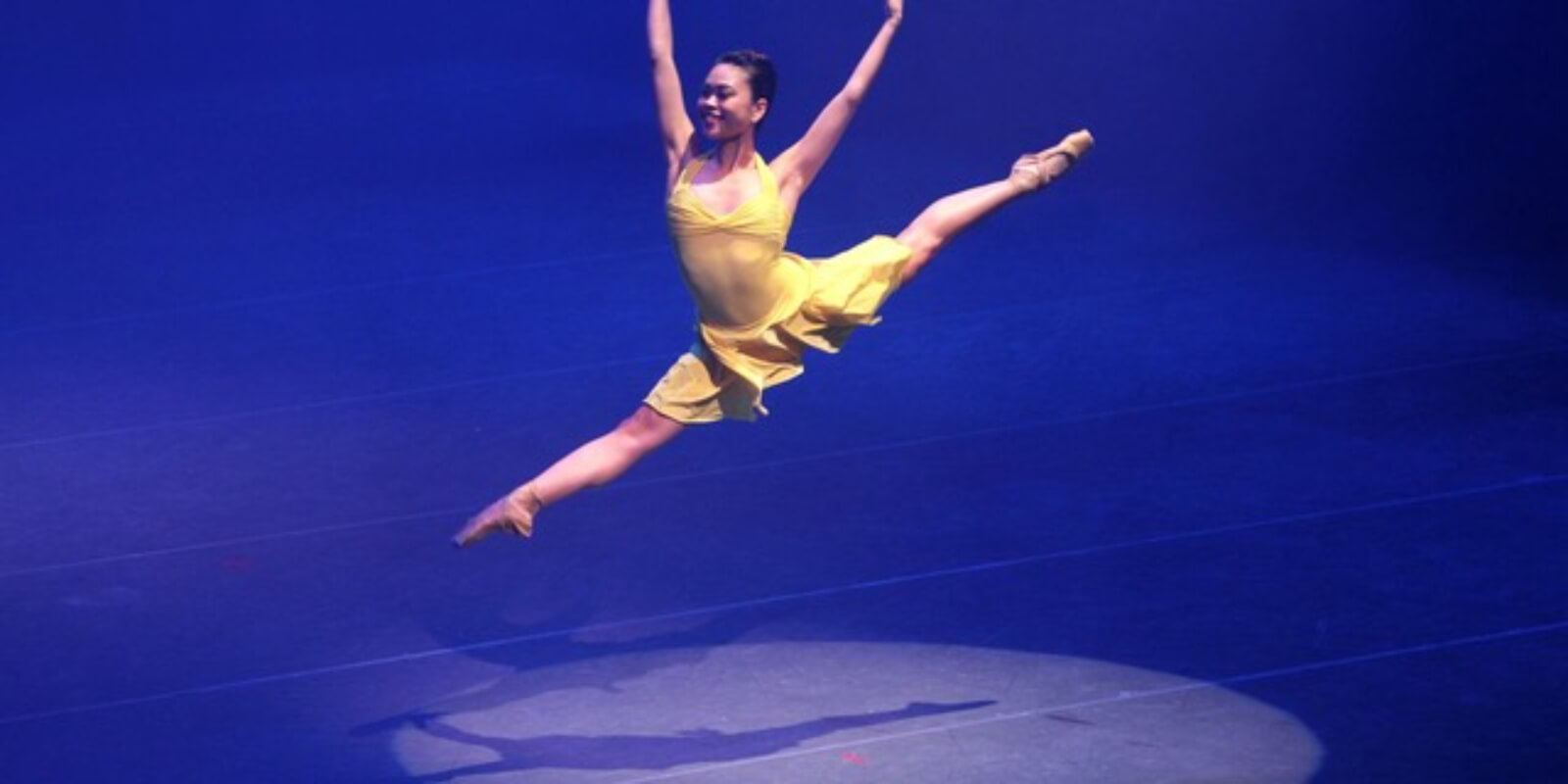 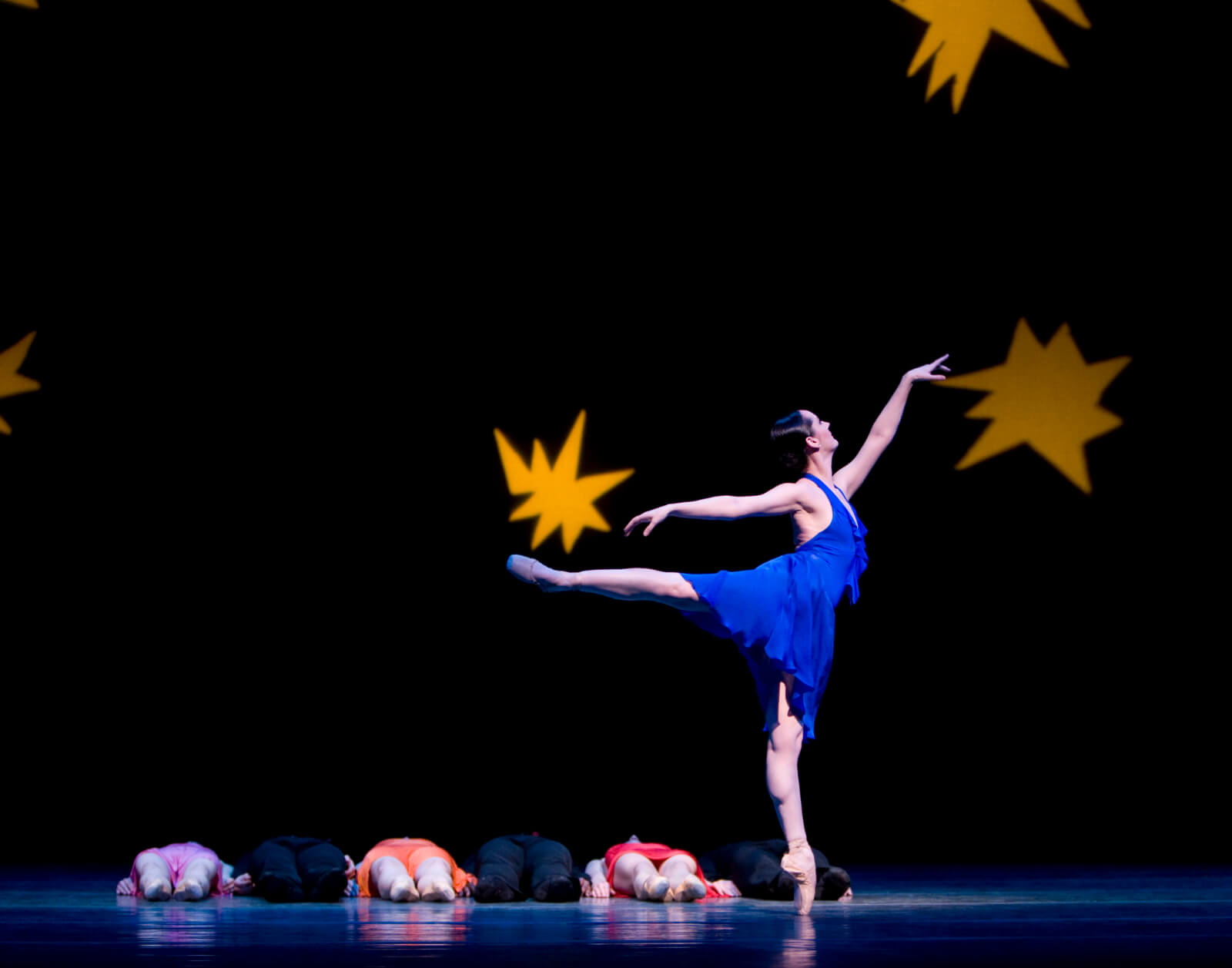 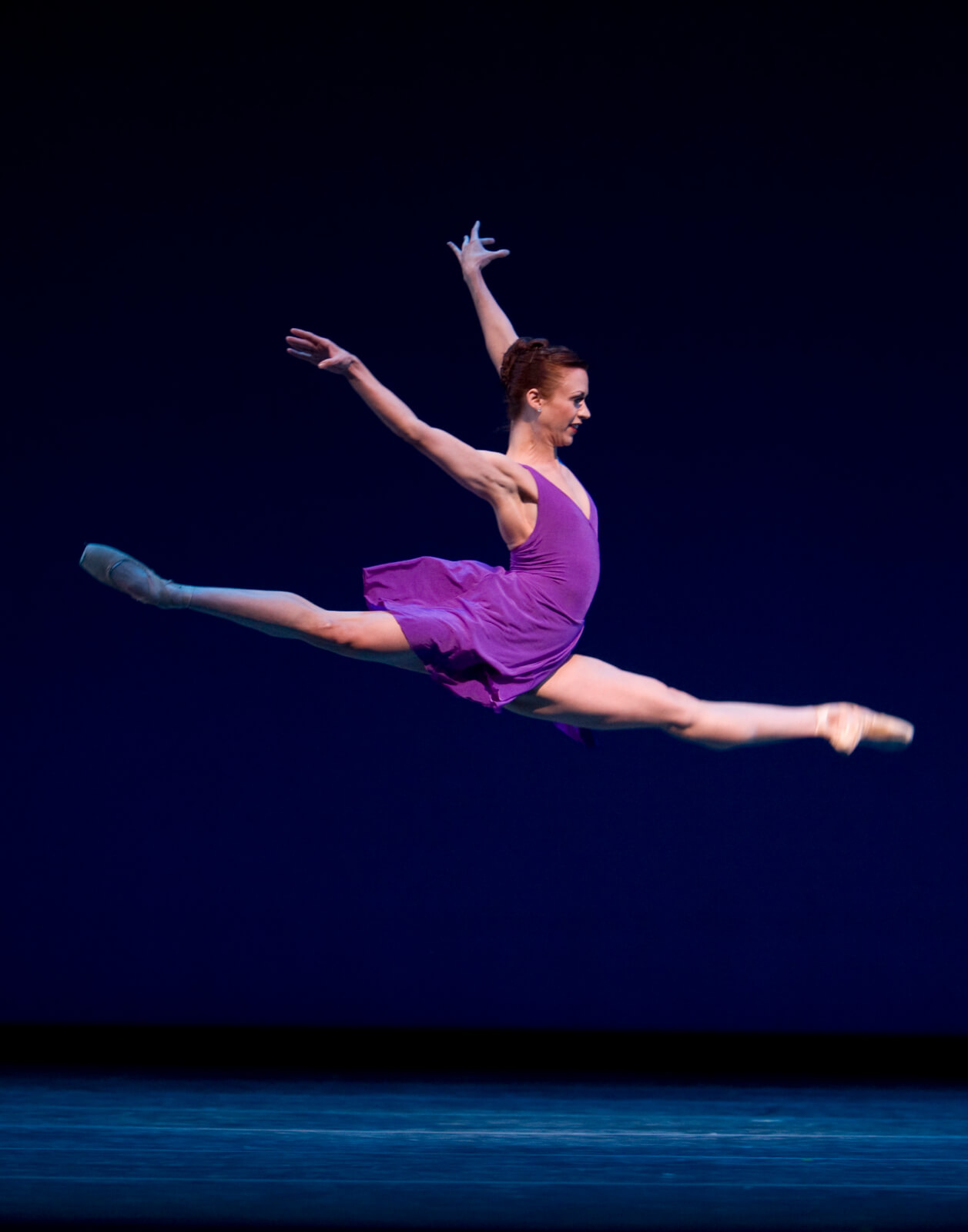 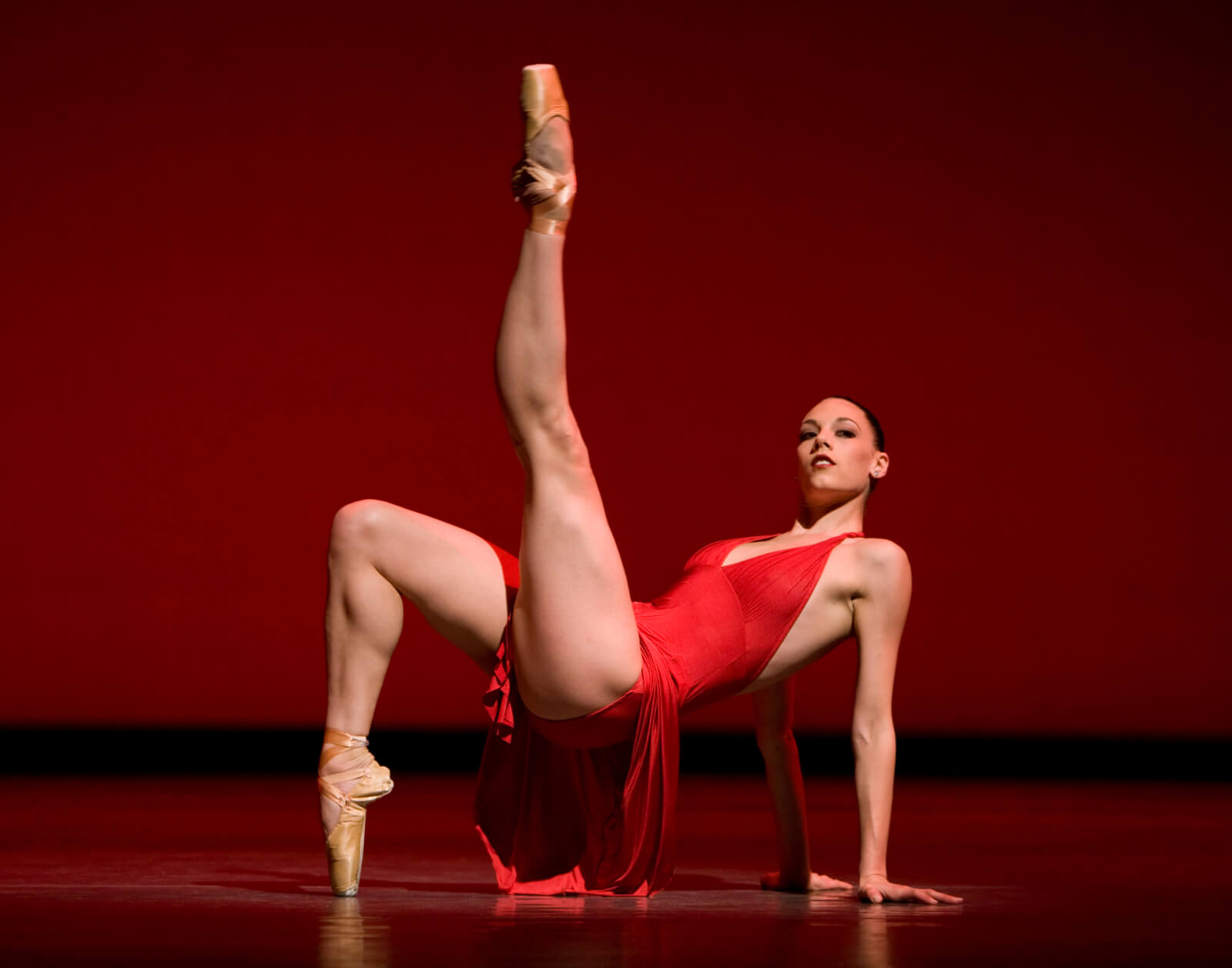 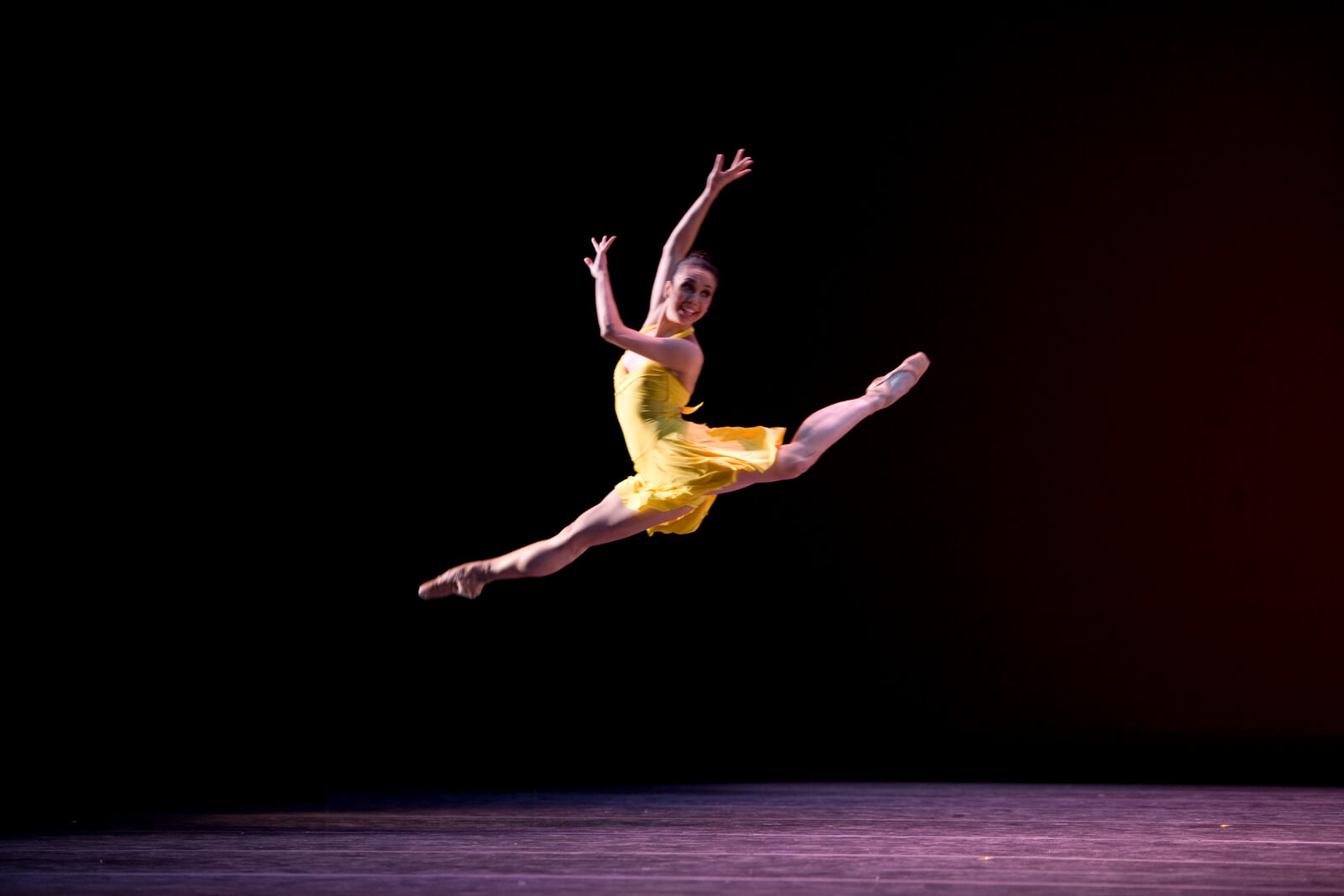 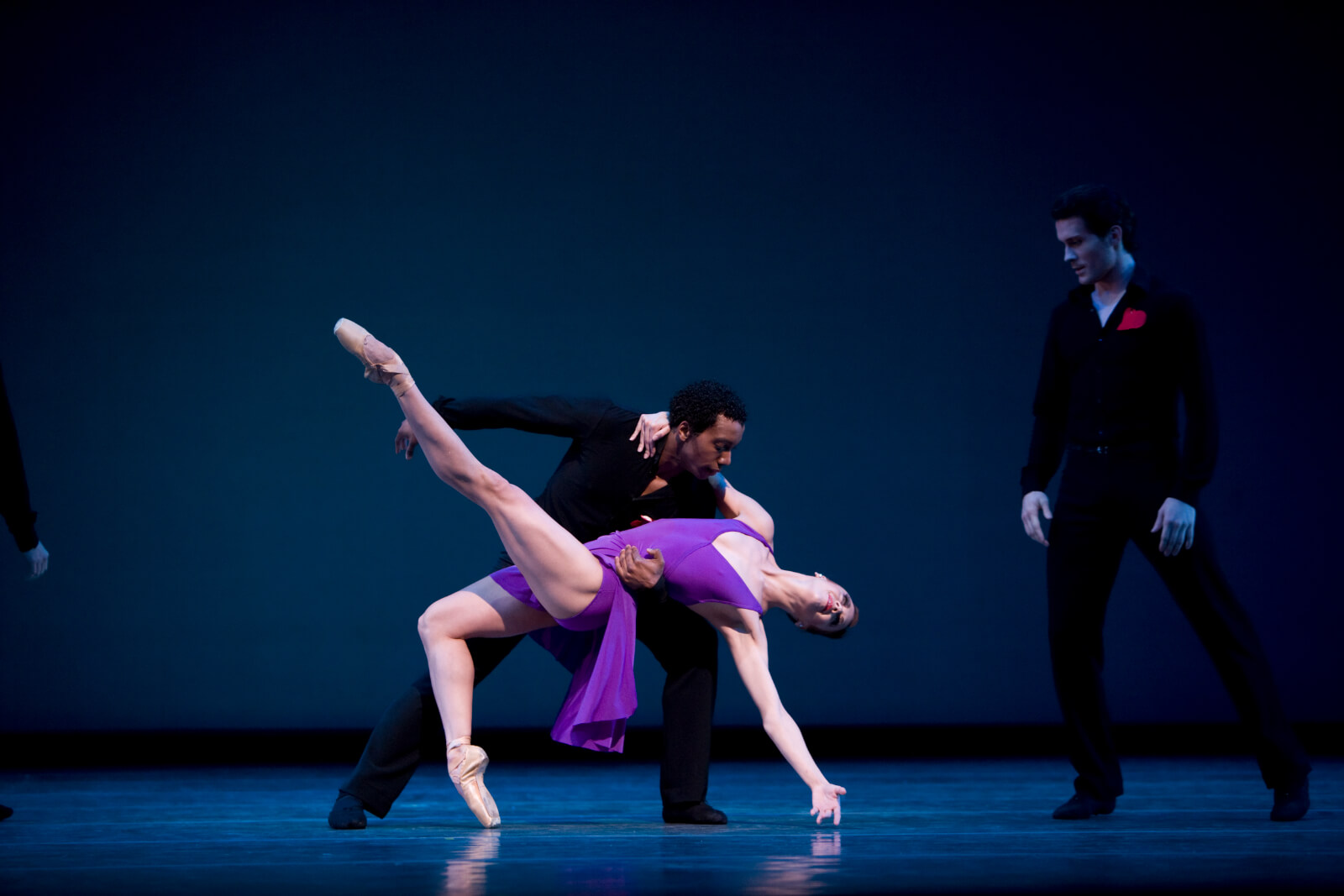 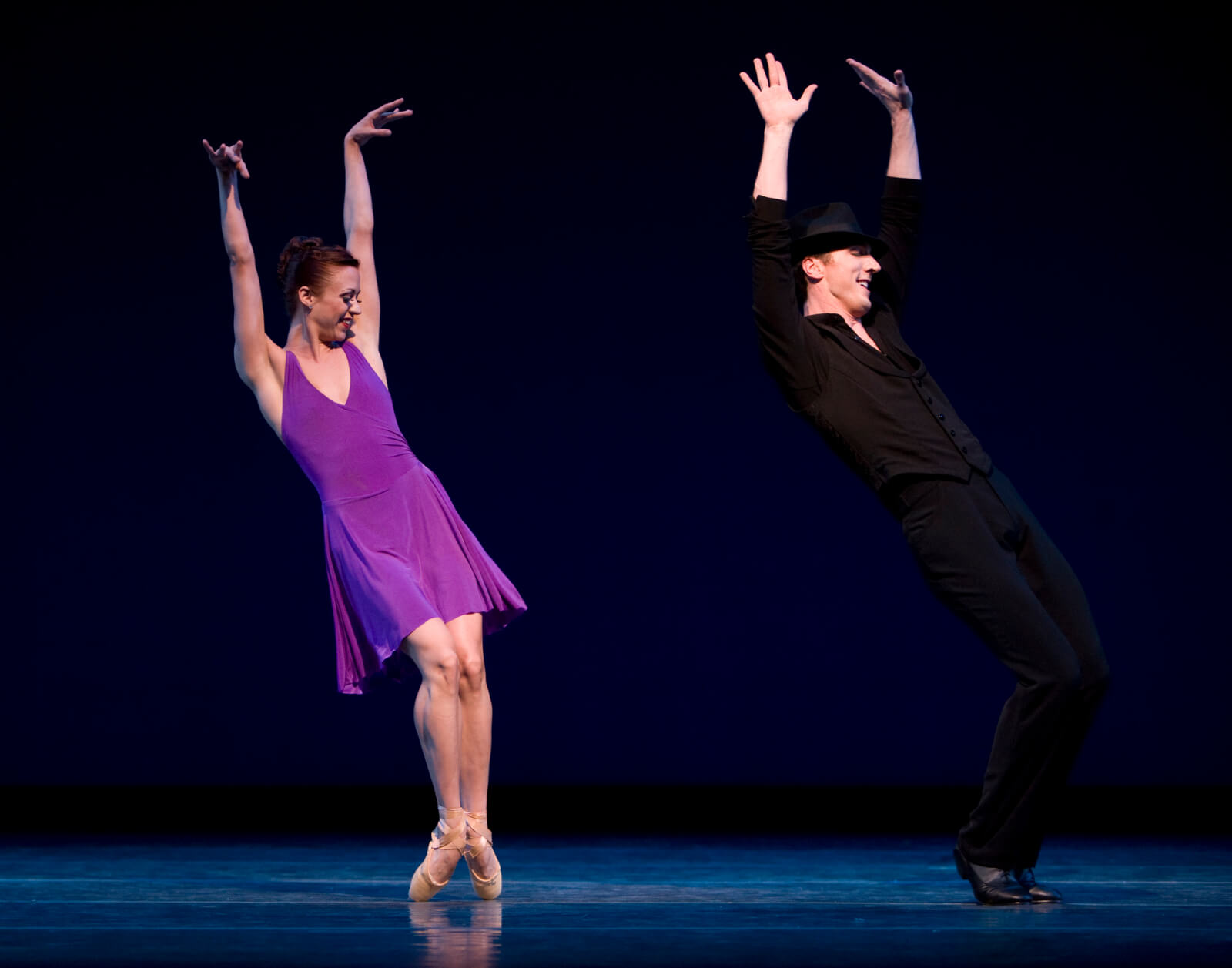 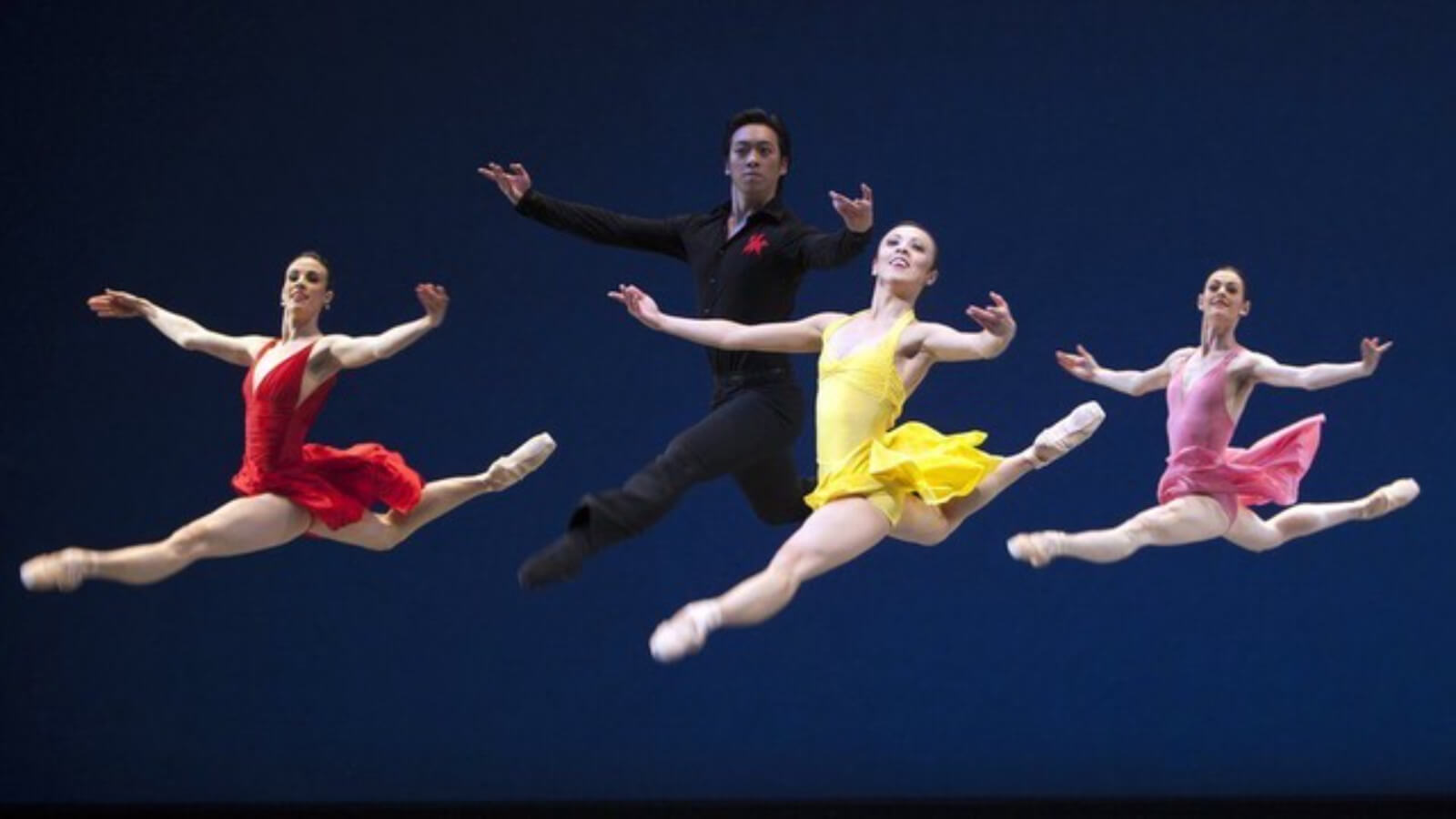 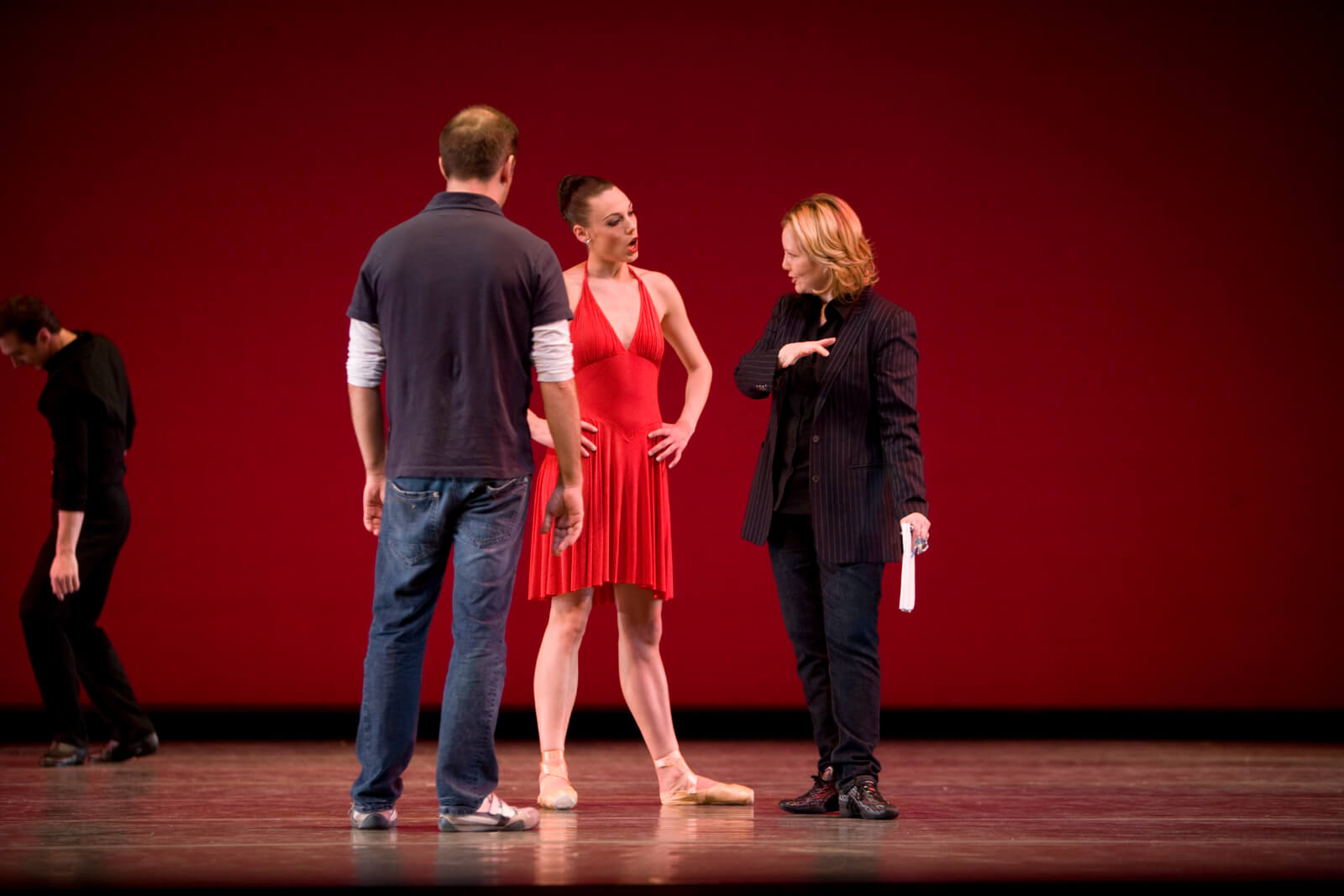 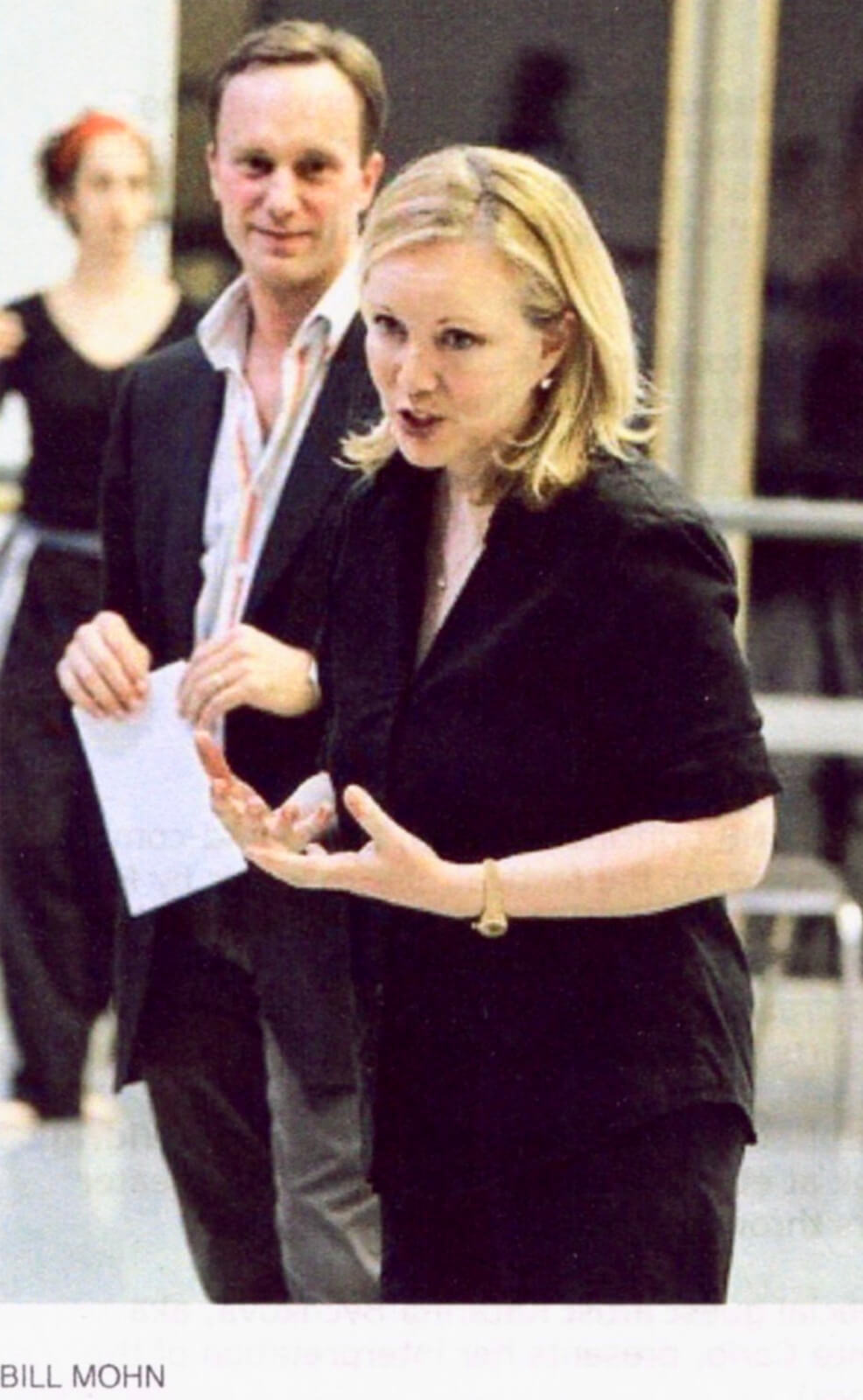 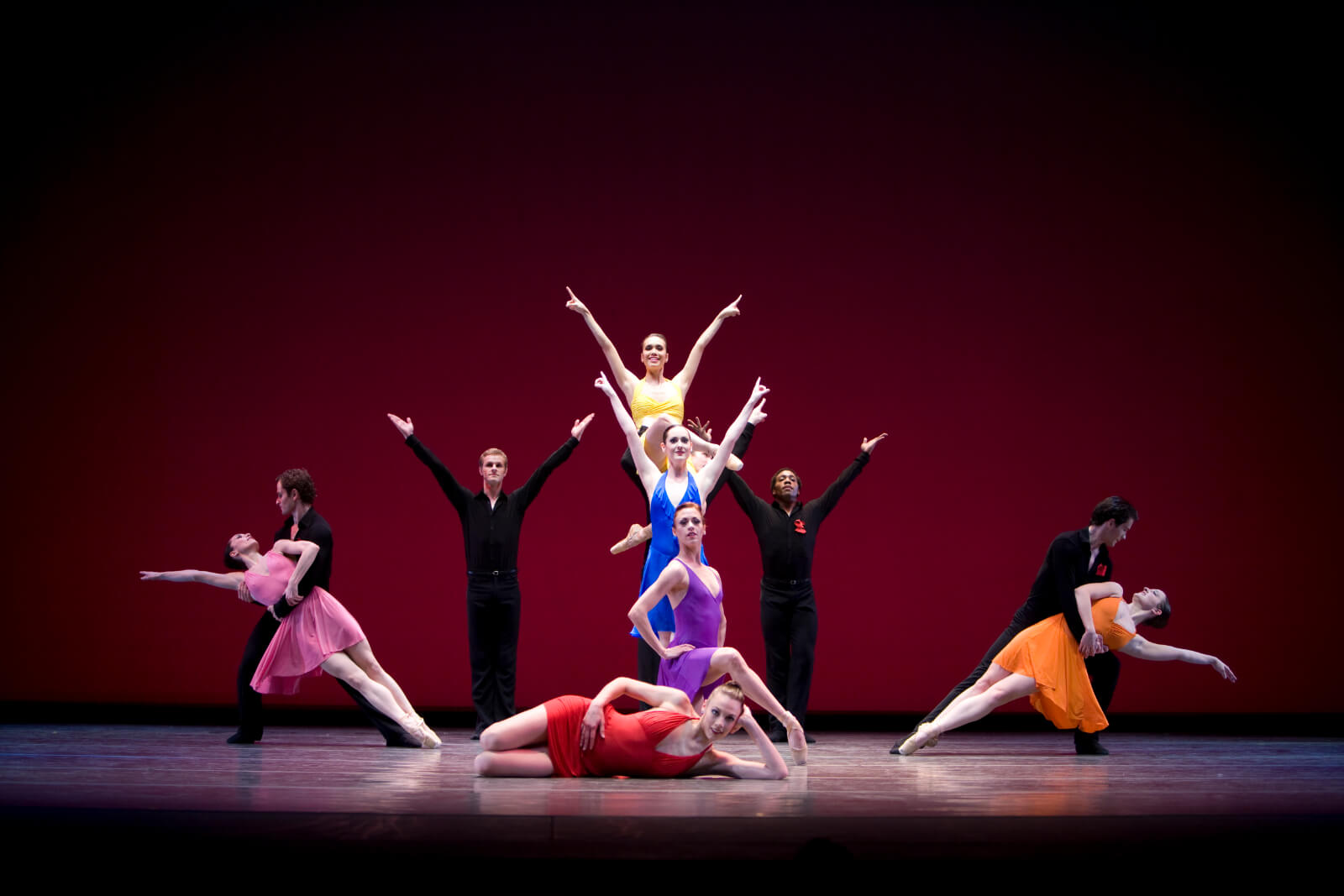 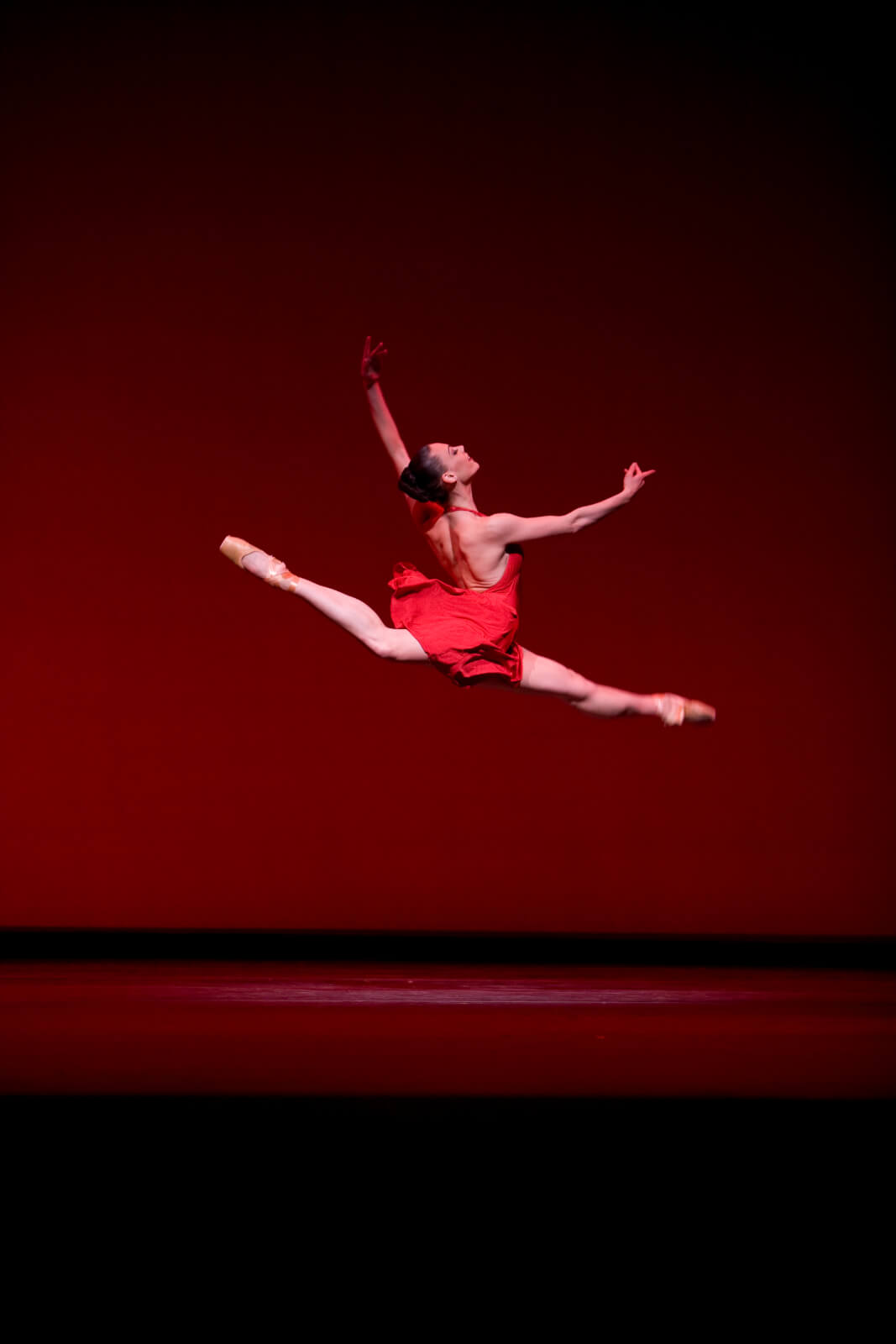 Take Five… More or Less opened at The Pacific Northwest Ballet on April 17, 2008.