A Little Night Music is my absolute favorite Stephen Sondheim musical. I adore the beautiful waltzes, the witty lyrics, the life-affirming book about love, regret, and desire. The show is a true celebration of love in all its forms. There are many beloved lines, but one of my favorites happens after watching the romantic lives of several couples crash, the elderly Madame Armfeldt asks, "What's it all for?" Her granddaughter Fredericka answers, "Well...I think it must be worth it... it's all there is, isn't it?"

New York City Opera saw this piece as something that straddled the line between the theater and the opera. The show is very similar to an operetta because most of the singing roles require strong, legitimate operatic voices with a wide range. The score is simply sensational, written in 3/4 time.

Creating a waltz for the entire company to Sondheim's haunting "Night Waltz" was a highlight for me. The curtain rises on a tableau of the principal players standing in various poses on Michael Anania's beautiful Monet-like set. The lead character Desiree Armfeldt (Sally Ann Howes) gestures for all the players to move. The players walk, pacing and regarding one another. They then begin an easy waltz, dancing with various partners like a courting game. At one point, they waltz with the partner they long to be with, however, by the end of the number, they return to the partners with whom we will first meet as our story begins.

Because the set was abstract, we dressed the supernumeraries as servants in a grand household, choreographically bringing onstage the furniture, rugs, and various props for each scene. The director Scott Ellis and I worked closely to make the set transitions fluid, musical, and always pushing the plot forward. "Perpetual Anticipation" is a good example – servants majestically carrying chairs onto the stage, walking in rhythm, and creating a drawing room as the principal players weave between them and continue their flirtations.

The number I most enjoyed staging was "A Weekend in the Country". A full company number, it begins when Madame Armfeldt (Regina Resnik) invites Frederick (George Lee Andrews) and Anne (Beverly Lambert) to her chateau for the weekend. Via gossip, whispers, and a much-circulated invitation, they all prepare to head to the country. The music is phenomenal and has an effective build that drives towards a dynamic Act One closer. Through Sondheim's brilliant lyrics, the characters simultaneously sing, giving voice to their natural discourse as well as their inner monologues. Scott and I developed a staging that serviced the lyric and portrayed each character's hurried anticipation at spending a weekend in the country. There is even a miraculously quick costume change in which all the players excitedly appear dressed in white outfits perfectly suited for a visit to a country chateau.

We were lucky to have Sondheim so involved in our version of A Little Night Music. He worked with the singers one-on-one and spoke to the company regularly. Meeting Sondheim at such an early phase of our careers and getting his approval and encouragement meant a great deal to Scott Ellis and me.

For me, the real star on this creative team was Paul Gemignani – our masterful musical director and conductor. By this point, Paul and Sondheim had worked together on several shows and had developed a shorthand when it came to teaching and conducting Steve's music. Paul is comfortable in an opera setting, concert setting, and theater setting. He is one of the most visual conductors I have ever had the pleasure of working with – equally in tune with the musicians in the pit and the actors on the stage. Paul sees and feels the breath of the singer, supporting and guiding them through every moment. And he understands dance – he watches the dancers and knows when the tempo is perfect.

On opening night, I was watching Gemignani command the 60-piece orchestra. At times, I could see him swaying to the beautiful waltz score. Suddenly, Madame Armfeldt jumped a full page of music in her number, "Liaisons". I held my breath in the back of the theater and witnessed Paul Gemignani actually will that orchestra to the right bar of music and at the same time guide his actress to the correct lyric. It all happened in a New York second and it was astounding.

Of course, bowing onstage with Sondheim and the creative team at the end of opening night is most memorable. The audience adored the show, and they truly loved cheering for Steve – it was as if they were privy to a rare sighting of our modern-day Shakespeare. And when Desiree brought out Paul Gemignani to bow next to Steve, I thought my musical heart would jump out of my chest with pride and joy.

A Little Night Music had been brought back several times by New York City Opera. But, like most operas, it played for only a week or two at a time. I enjoyed this provocative show and the captivating cast so much, I wish I could have relished it for a very long time. But, as usual, the curtain came down and it was on to the next show... 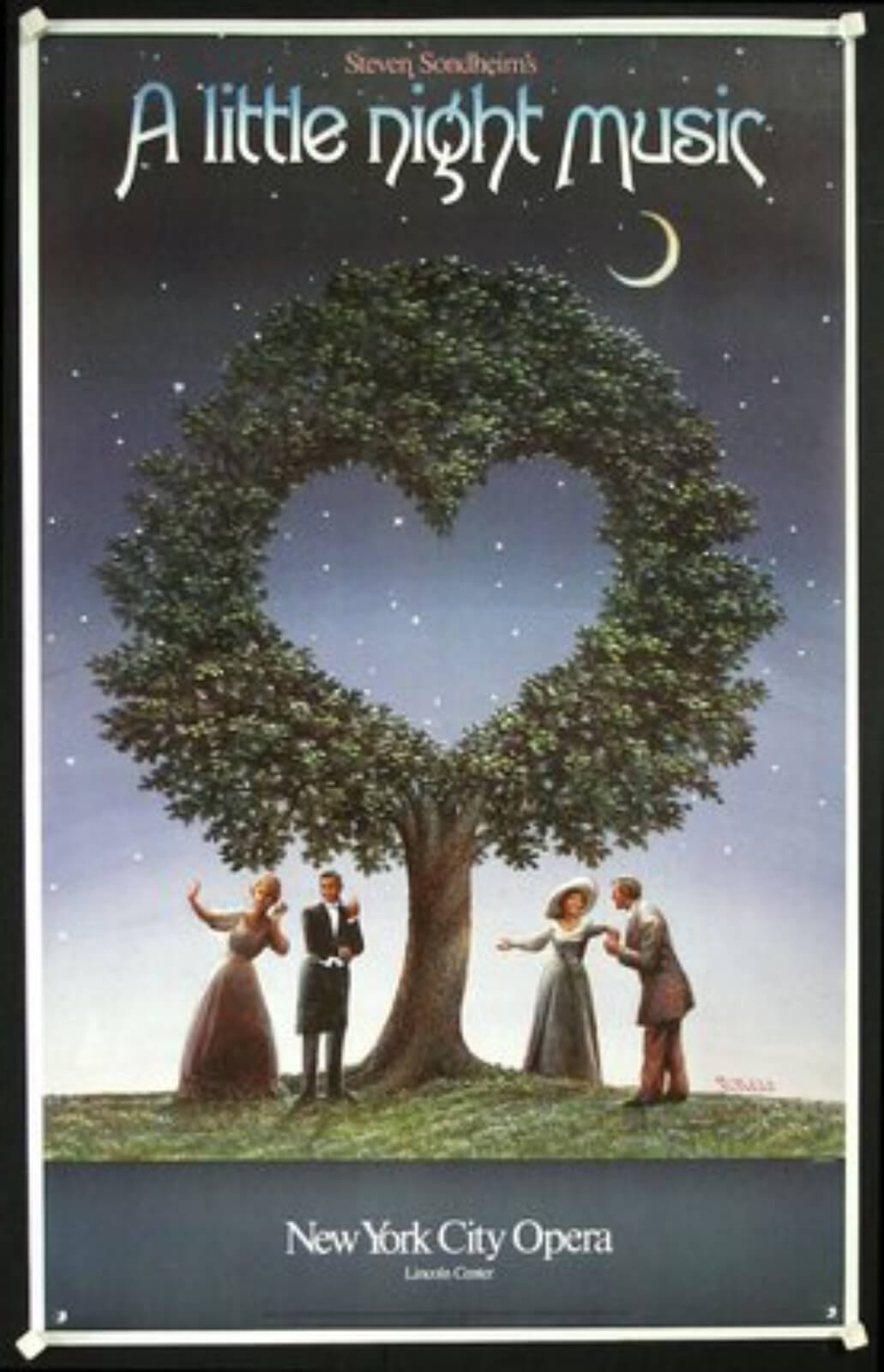 The official poster of the New York City Opera production. 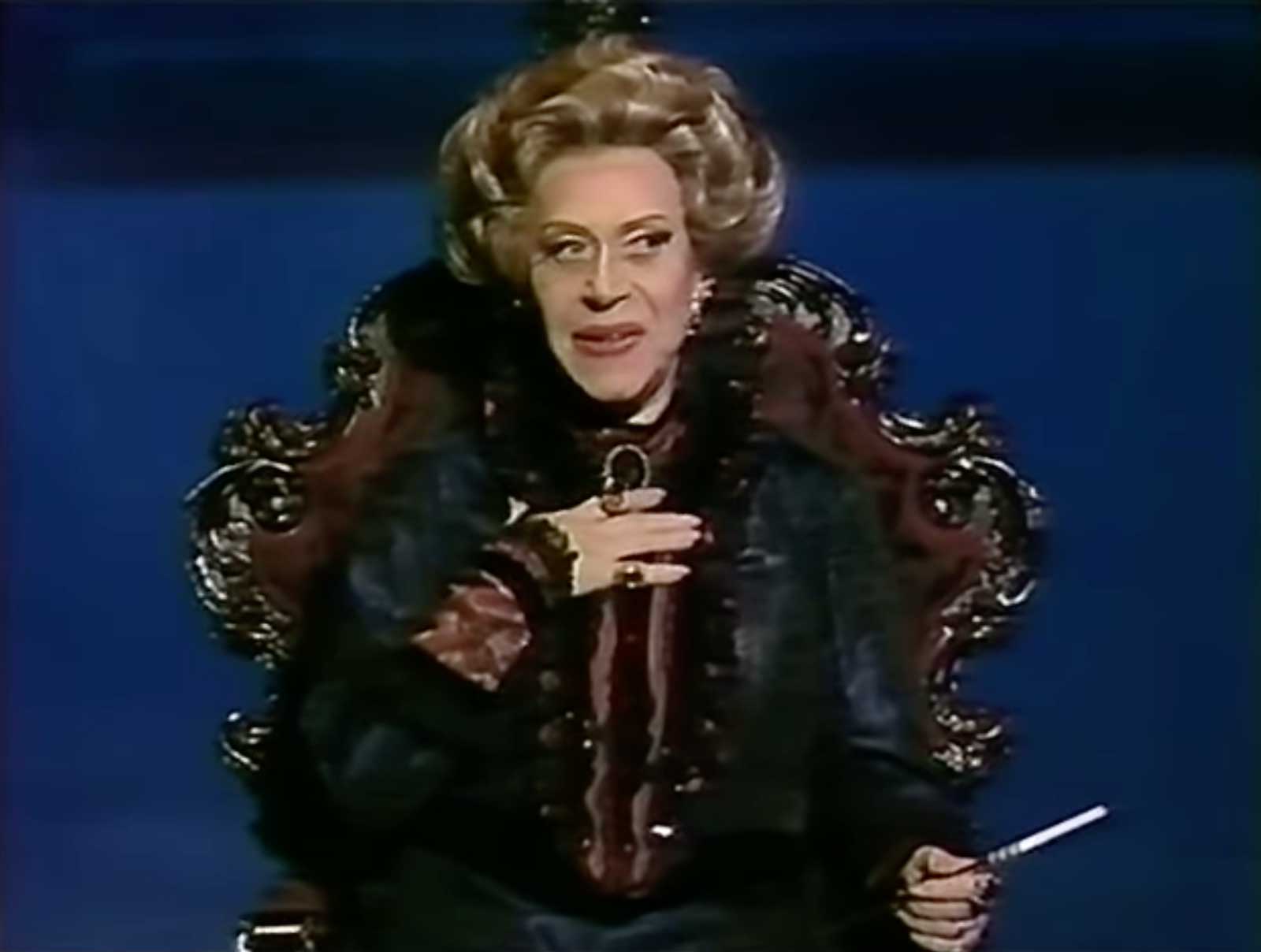 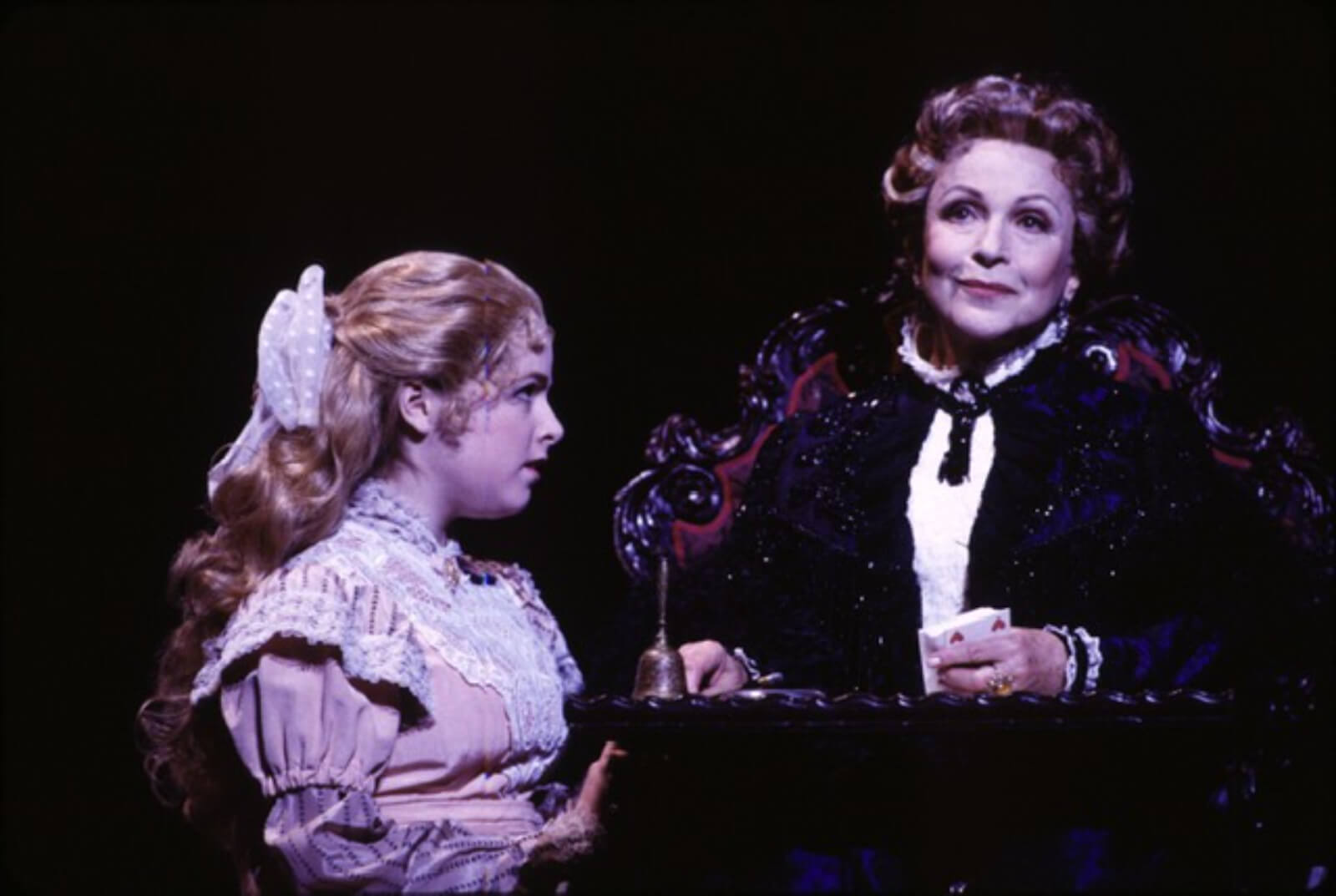 Anna Kendrick as Fredrika and Claire Bloom as Madame Armfeldt. 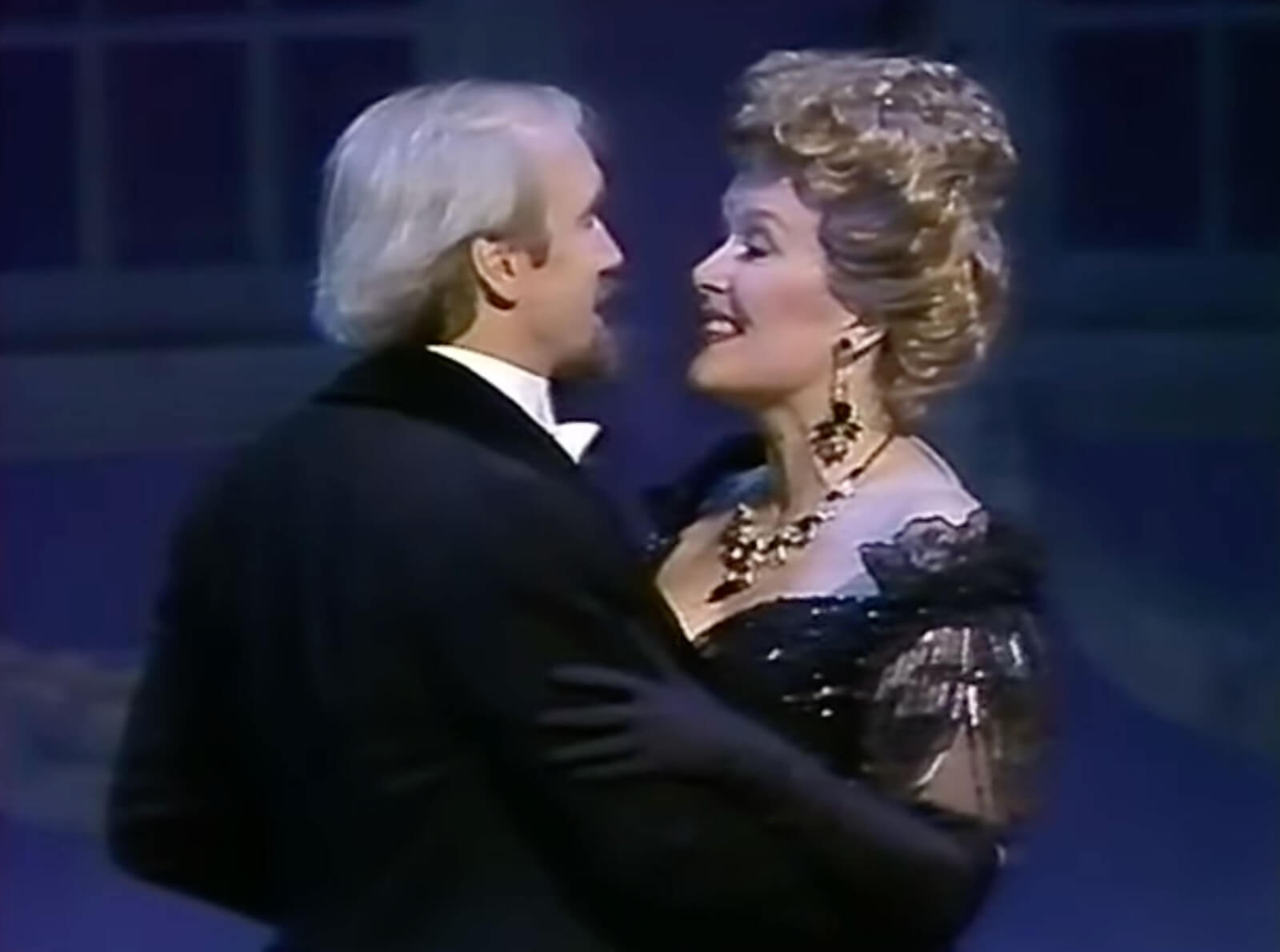 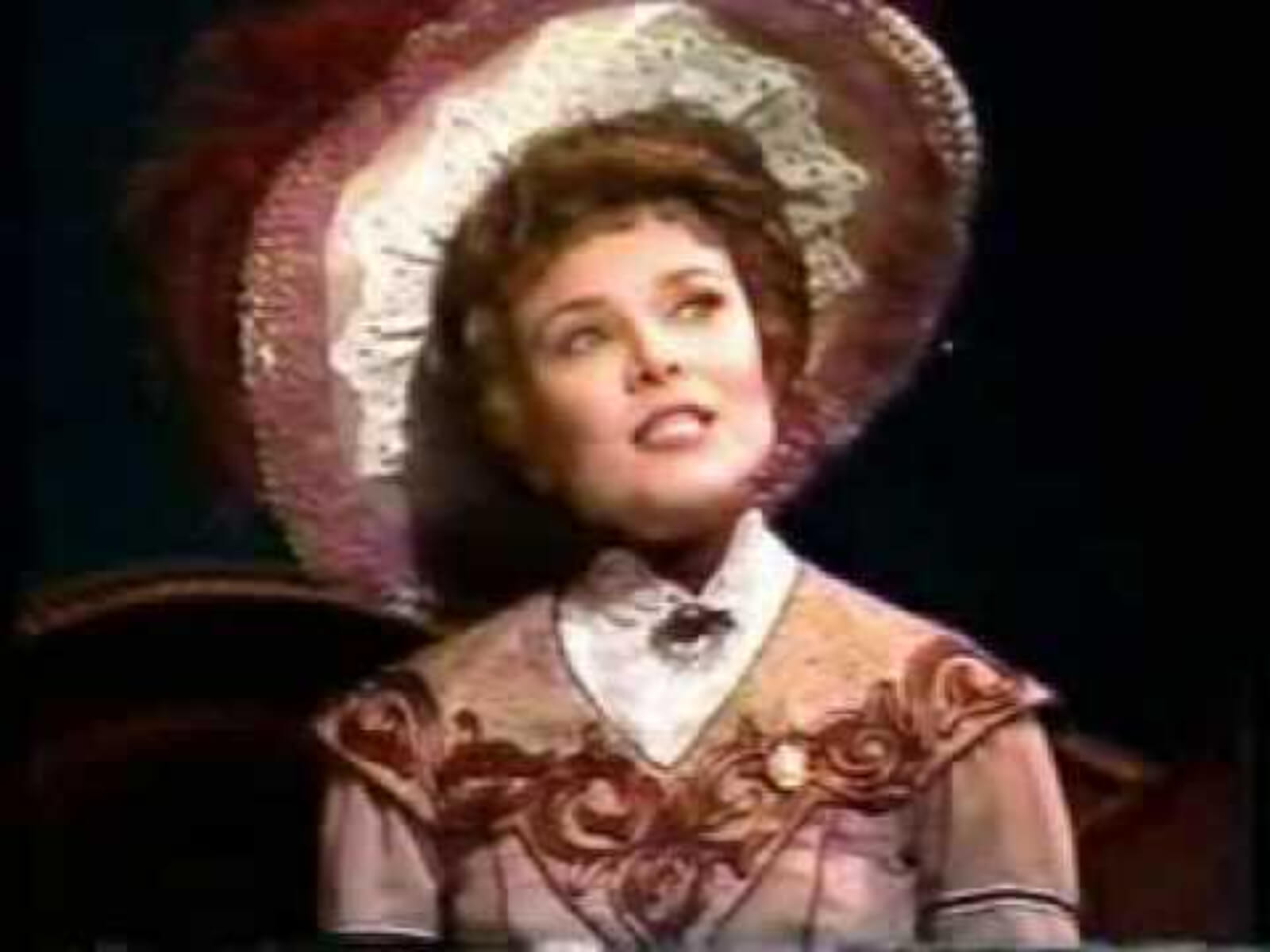 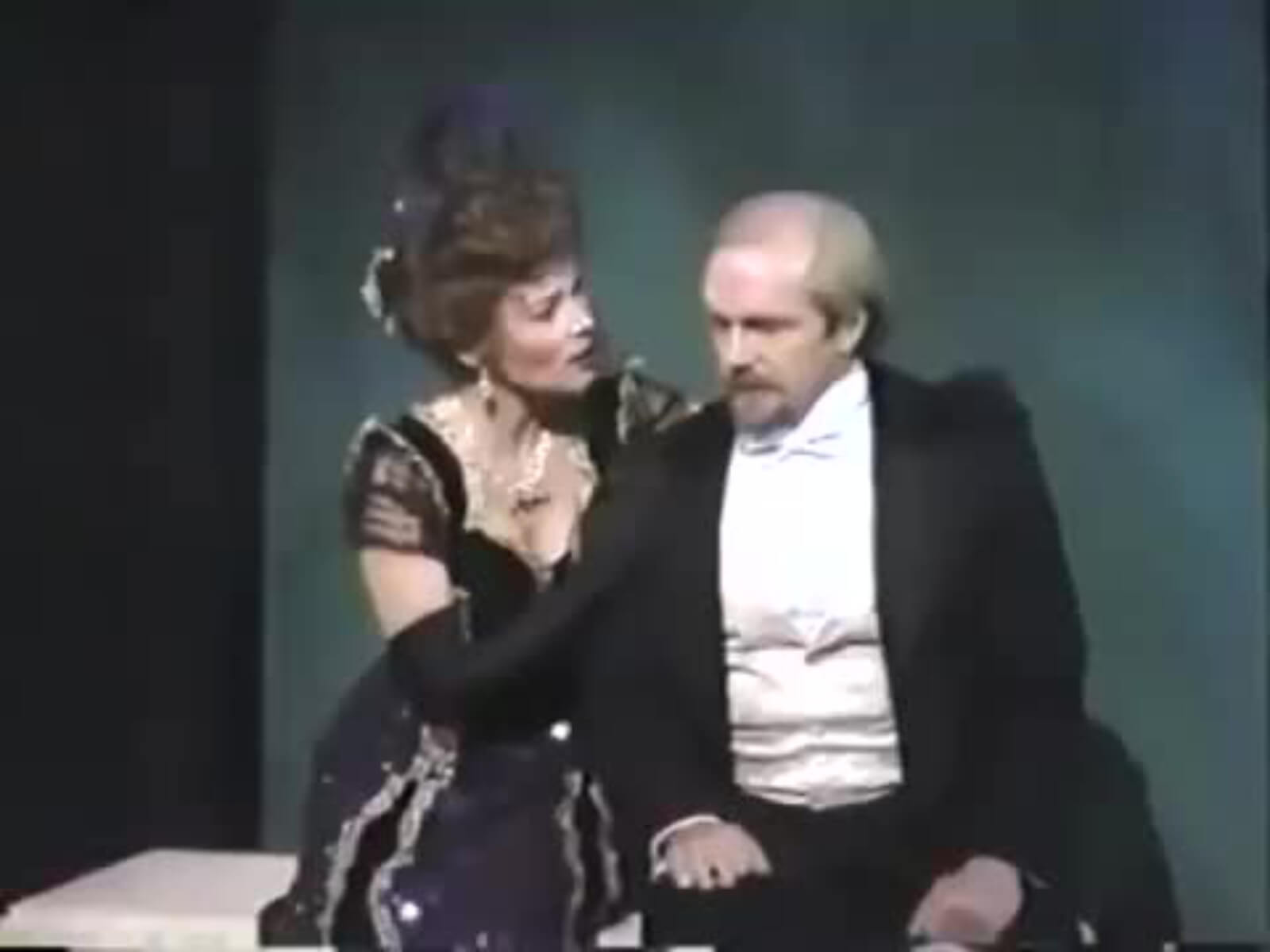 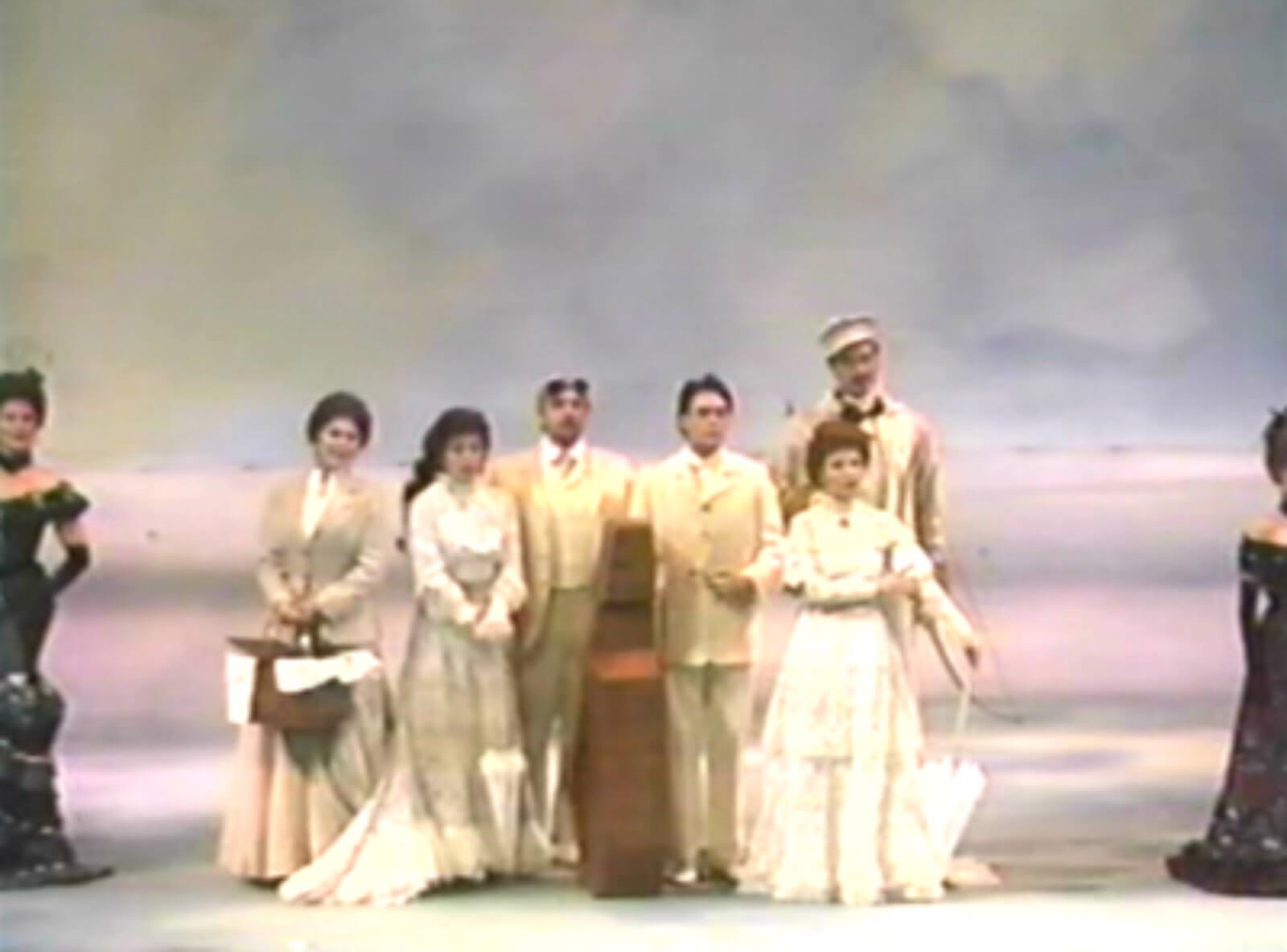 The cast of A Little Night Music singing "A Weekend in the Country". 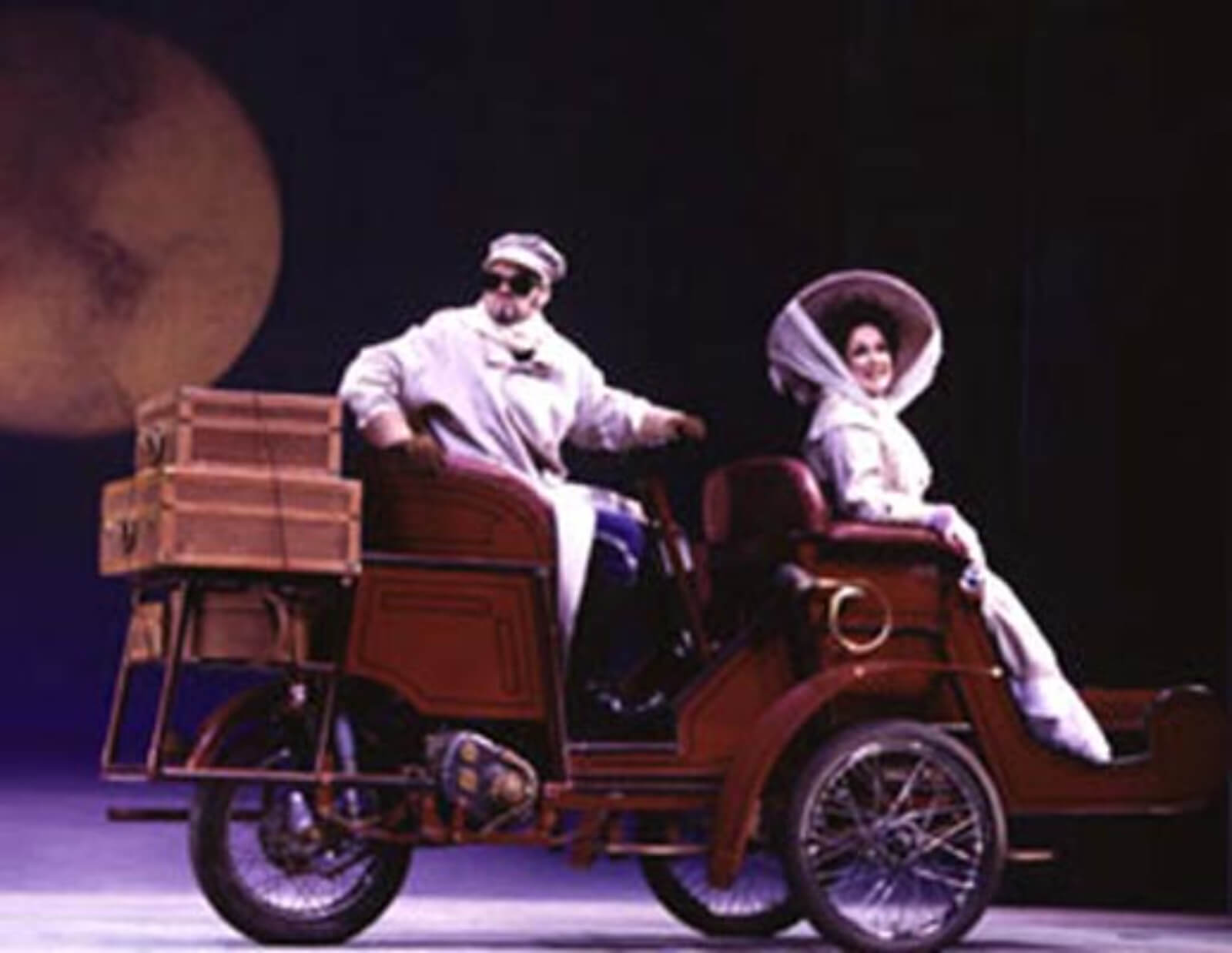 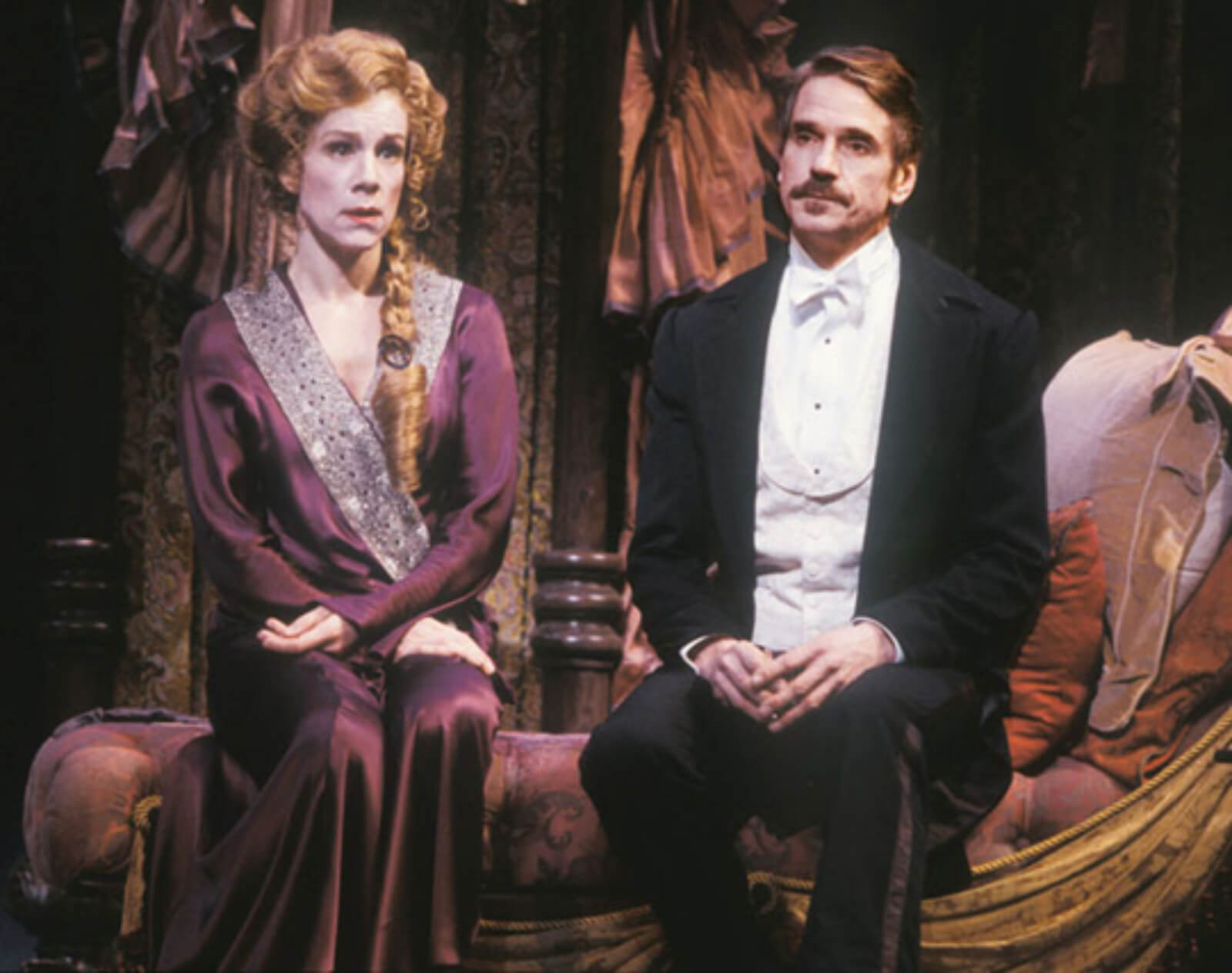 Juliet Stevenson as Desiree Armfeldt and Jeremy Irons as Fredrik Egerman sing "You Must Meet My Wife". 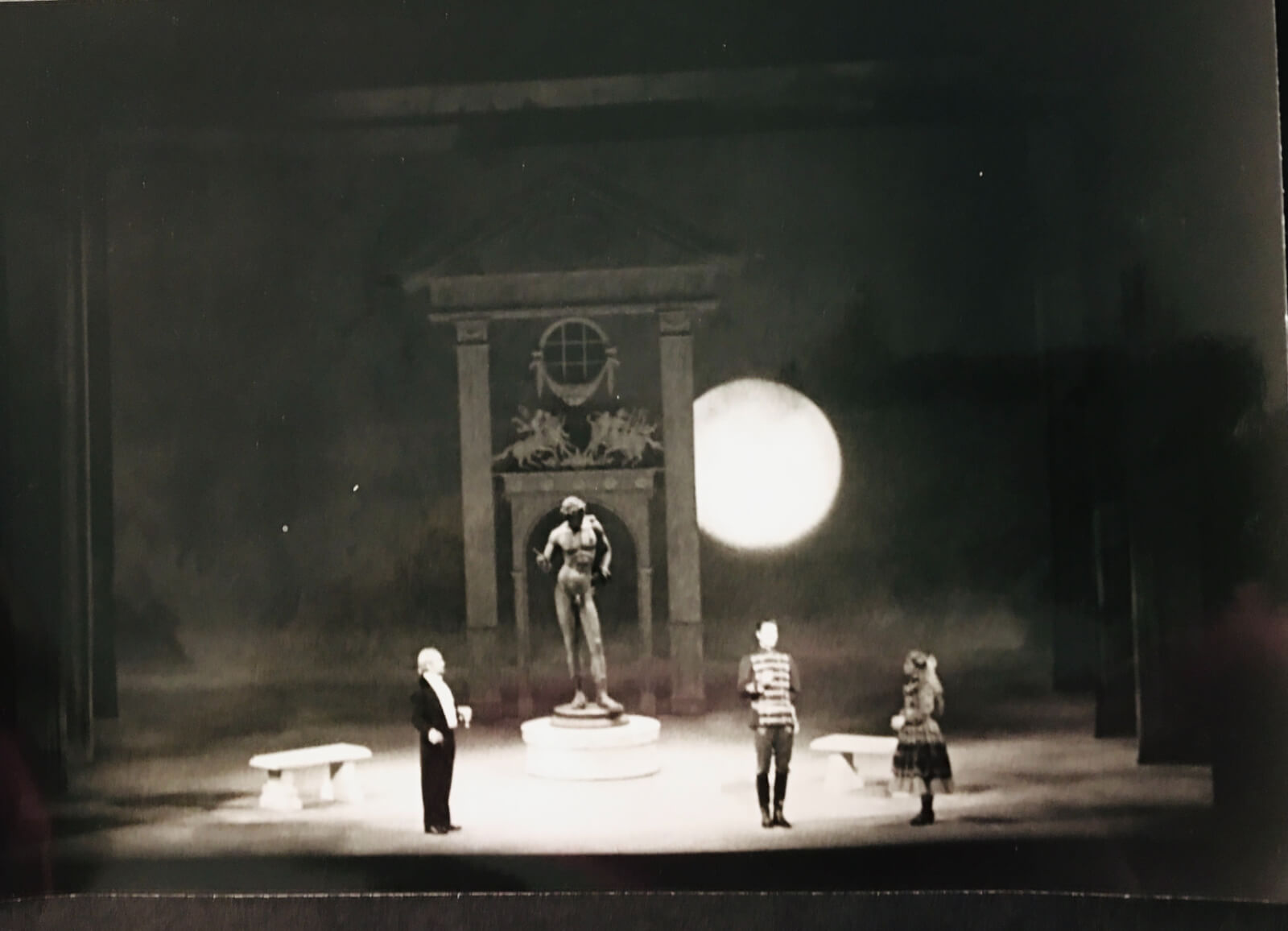 Michael Anania's garden set for "In Praise of Women". 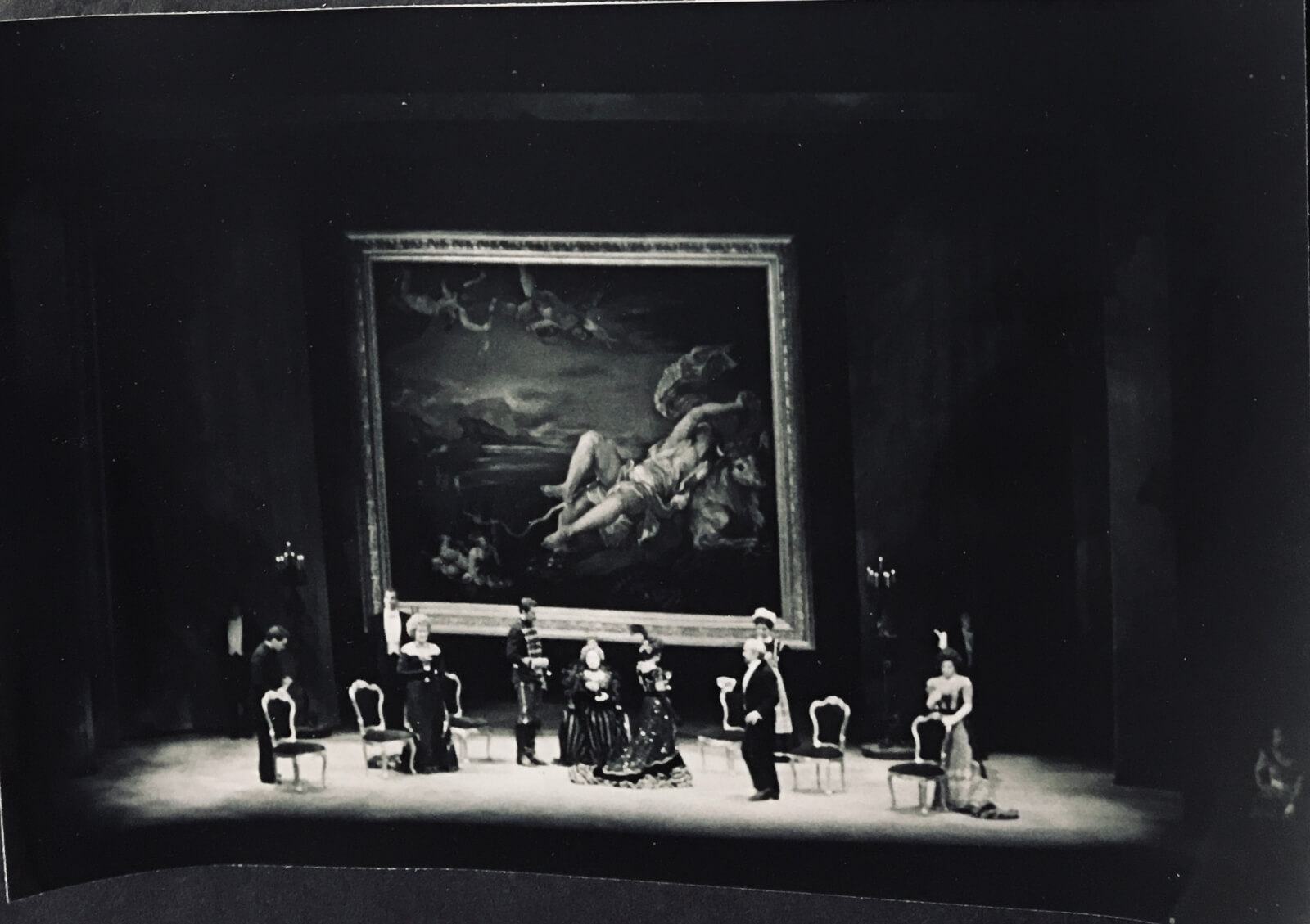 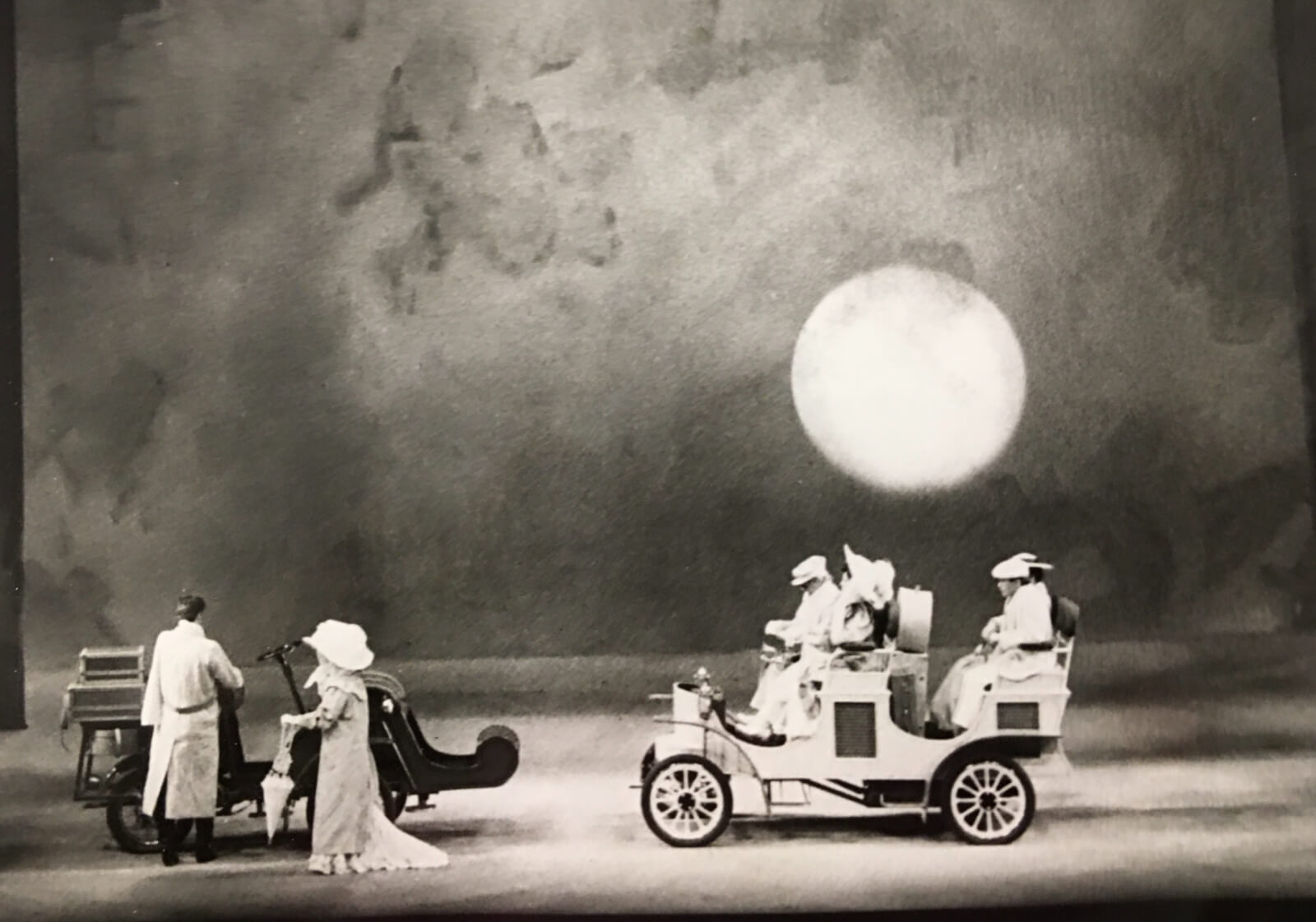 A Little Night Music opened at New York City Opera on August 3, 1990. It premiered on PBS: Live from Lincoln Center on November 7, 1990.