Trading Places is a show I created in the 80’s with my good friend Jeff Veazey. We performed it at the Equity Library Theater – a New York City-based non-profit designed to provide a showcase for young artists who could not afford the commercial theater.

The concept of Trading Places revolved around two young people lamenting the state of theater today and obsessing over filmdom’s old dance teams like Gene and Judy, Fred and Ginger, etc. Using that frame, Jeff and I recreated, to a T, many of the most famous dances ever created for the movies – “Pick Yourself Up”, “The Best Things Happen While You’re Dancing”, “How Could You Believe Me”, “Begin the Beguine”, just to name a few. How could I know this little show and this dance partner would have such an impact on my life?

I met Jeff when I first began performing in industrial shows. Industrials were very popular during the 70’s and 80’s. A corporation would hire you to sing and dance about their products at conventions. These shows were a real lifesaver – every Broadway gypsy auditioned for them. You could book three or four industrials a year which would give you enough money to make rent or take classes or audition without having to wait tables. I did plenty – Oldsmobile, Metropolitan Life, Kinney Shoes, Honeywell Computers, Maidenform.

Jeff and I met on a Cutty Sark industrial. There was a lot of tap dancing in this particular show – who knew tapping and scotch whiskey went so well together? Jeff clocked me and my dancing feet, and one day walked up to me and asked, “How would you like to rent a studio with me twice a week and just tap together—have a tap off!” I was skeptical at first. I did not really know him. He was a well-respected Broadway dancer – I had seen him in Sophisticated Ladies and he was currently in Sugar Babies. He was quite the old school song-and-dance man with a reputation for being demanding. I think that was because he was just so smart – his mouth ran in front of him sometimes. He was a perfectionist and had little patience for anyone who wasn’t striving for excellence. During rehearsal for the Cutty Sark show, I heard his voice ring out, “Okay, who’s in charge of this dance floor?” No one else would dare say anything, but Jeff would speak up if something was wrong.

So I said sure – what did I have to lose? I could go head-to-head with this hoofer and play “can you top this”. I might even learn something.

Jeff and I began meeting twice a week in an old rehearsal space at Harlequin Studios. The studios were located in the Theater District. You had to climb a long flight of vertiginous, rickety stairs to reach the second floor. The rooms were shabby and not particularly clean. I could hear pigeons trapped in the walls. I remember thinking that not only would I come out of this pairing with some new tap steps, but probably with Legionnaires' disease as well.

Jeff’s feet were fast. I had not met anyone in the whole city who could tap as well. Jeff would toss out steps to me and I would pick them up right away. However if I gave him a step that he couldn’t grasp as quickly, he would loudly point out “That step is flawed.” He would show me all of Ann Miller’s dance steps. He knew her routines from every movie and, of course, all her steps in Sugar Babies. I came to love my time in a studio with him.

After one of our marathon tap-off sessions Jeff said, “What if we recreated some of the choreography from the iconic movie dance teams?” That seemed like a lot of work to me – my head was already into creating dance, not re-creating it. I wanted to be my own choreographer, but saying no to Jeff was hard, especially when he was excited about something.

If I was going to go to the trouble of learning this, we had to make it into some kind of show – I did not want to have someone else’s choreography beaten into me if there wasn’t an endpoint. I wondered what would happen if we riffed on Jeff’s absolute adoration for these dances and made a show about two people wanting to dance like they danced in the great old movie musicals?

I called my good friend and musical director Dennis Deal. We had created a few industrial shows and also worked together when I choreographed the act for the big country western star Eddy Arnold. Jeff and I met with Dennis and we started talking about the concept of two young kids obsessed with the old movies. We decided the score should be a combination of old standards and new contemporary music written by Dennis.

Knowing we needed to build in time for costumes changes, we added three singers to the show – a trio of woman who sang in constant harmony and sounded like the MGM backup singers. The trio would comment lyrically on the theater of today, singing during the moments Jeff and I were changing offstage. Our idea seemed like a great one, so while Dennis started to write music, Jeff and I started recreating dance numbers.

We went to Jeff’s apartment where he had a VCR. Jeff took the lead on this. He was already learning famous routines by tediously watching each video in slow motion, frame by frame. He was determined to not only recreate the steps, but the style as well – Ginger would hold her arms very differently from Judy.

We met every day and danced until our feet bled. The intricacies of the styles were sinking in and I was completely understanding the partnering behind it. Jeff was teaching me about partnering – leading, following, how two people danced as one. I was loving it.

As we progressed, there were moments I wanted to make something up, just to get on with it, but Jeff would scold me. He was a purist. We had to do the exact movement. This task master was like a real-life Astaire saying, “Again, again!” and I was a real-life Ginger saying, “I got it, I got it.”

I had heard Equity Library Theater would give young performers with an idea the chance to produce a show. Jeff and I took Trading Places to them and they were intrigued. We booked ourselves for two weeks. After that first night, we were sold out. The audiences went crazy. For one thing, they were watching these iconic dance numbers done in one take. And I think the idea of two people wanting to trade places with the stars of MGM and RKO had a sweet accessibility – take me back to the good old days when people danced together.

We were so popular that we were extended. Then a producer picked us up and booked us into the West Side Arts Theater. It was an amazing time. Here at such a young age in my career, I had created a show with Jeff and accumulated a fan base in the dance community. I was flying high.

Sadly, we discovered there was no way we could ever truly produce this show because of music rights. We did not know anything about that – we were in our 20’s! What are “rights”?? We just want to sing and dance!

The big takeaway from the show was we had been noticed by several industrial show producers. They hired us to do corporate events with the theme of “teamwork”. The shows’ producers would put up a big movie screen with Eleanor Powell and Fred Astaire doing “Begin the Beguine” from Broadway Melody of 1940 and through a split in the center screen, Jeff and I would enter dancing the exact dance downstage of the screen – exemplifying the teamwork, precision, and collaboration needed for success.

Though our little show did not see the bright lights of Broadway, Jeff and I became a real dance team like in the old days. What’s better, I came to love Jeff and admire him not only as perfectionist and a professional, but as a true colleague. I knew deep down, too, that he had found himself a real dance partner. Maybe that was what he had been looking for when he initially asked me to tap with him. I had gone from being intimidated by his brusque personality to admiring what he had taught me and loving him as a great friend. Our future seemed impossibly sunny.

We were doing our act for an MGM industrial in Reno, Nevada. They were releasing their musical movies on video and wanted us to host, sing, dance, recreate some of the numbers for their sales team. On our last day, just as Jeff and I finished “Begin the Beguine”, Jeff collapsed offstage. I kept telling him “Get up, get up! We have to take a bow!” He could not. I continued, suggesting altitude was to blame – “There’s no air in Reno!” But Jeff knew differently.

We flew home and immediately he went to see his doctor. Afterwards he met me and told me he had AIDS. I felt if anyone could beat this it would be Jeff. He was so strong, surely it couldn’t take him.

Six months later he was gone.

When Jeff became very ill, various friends and I would take shifts so someone would always be with him. When he passed, he was lying in bed with his hands folded across his chest. As he took his last breath something extraordinary happened – he raised both hands and clapped. He saw something that made him applaud.

In this business, people come into your life and make an indelible impression that lasts forever. I miss Jeff to this day. I have certainly passed along all he taught me. In shows with intense partnering like Crazy for You, Steel Pier, and Contact, I was able to use all the partnering technique and coach the dancers on how to move as one. It’s as if Jeff came into my life for that short amount of time just to prepare me for that.

There is one special tap step I sneak into all my shows. It’s hidden and no one would catch it – a little step Jeff and I did from “Pick Yourself Up”. It’s a way to always bring him along with me. 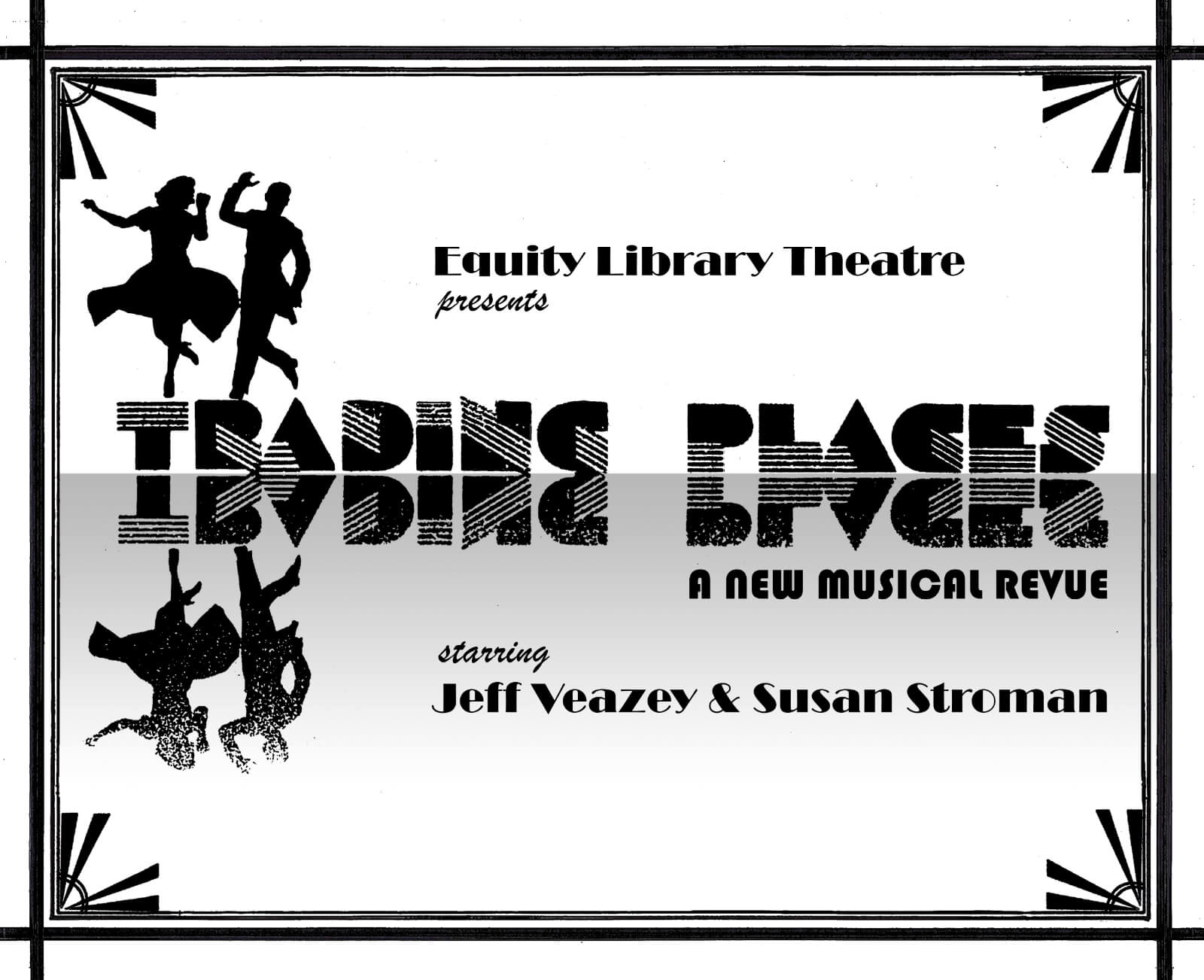 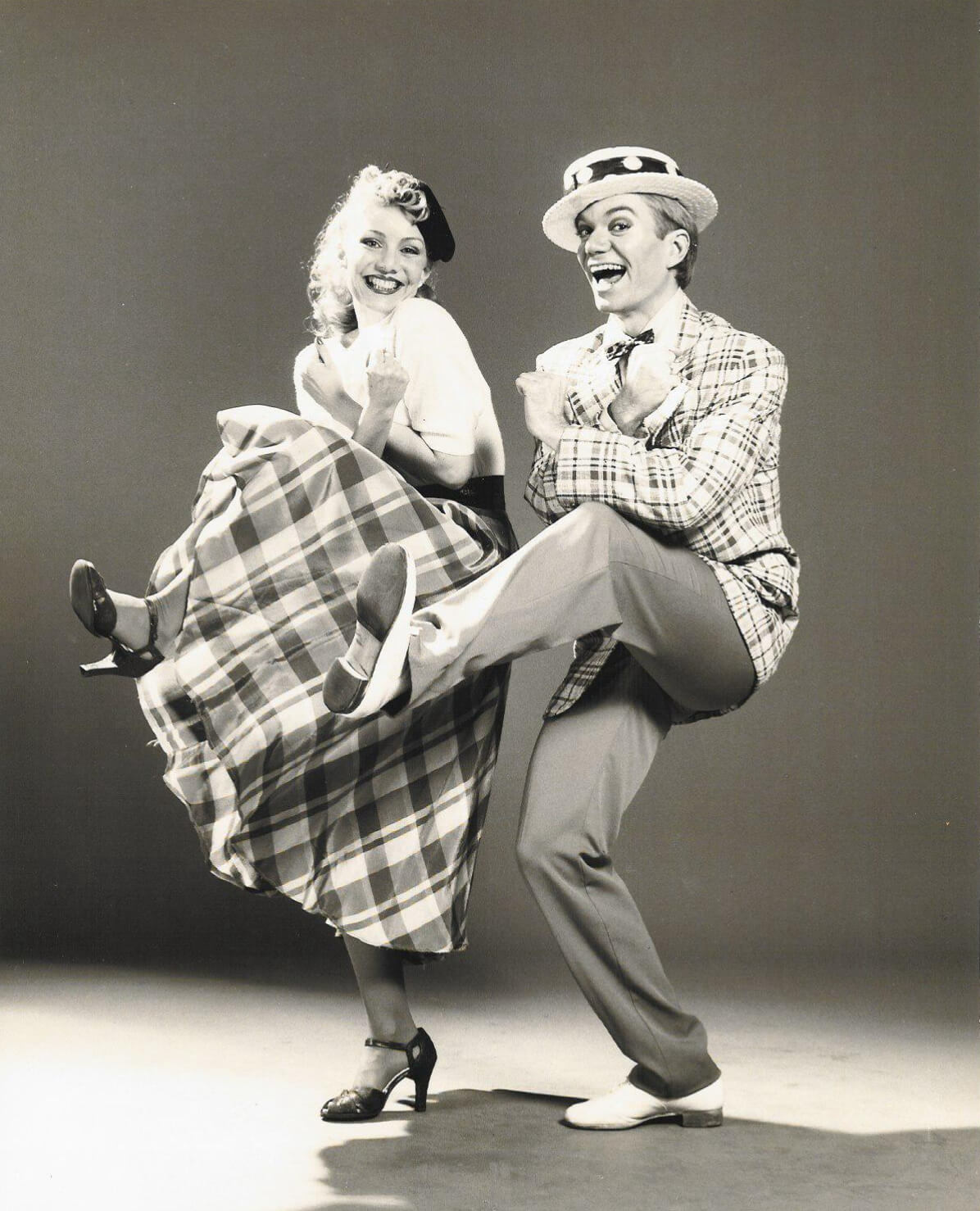 Susan Stroman and Jeff Veazey dance to, "How Could You Believe Me When I said I Love You When You Know I've Been A Liar All My Life?" 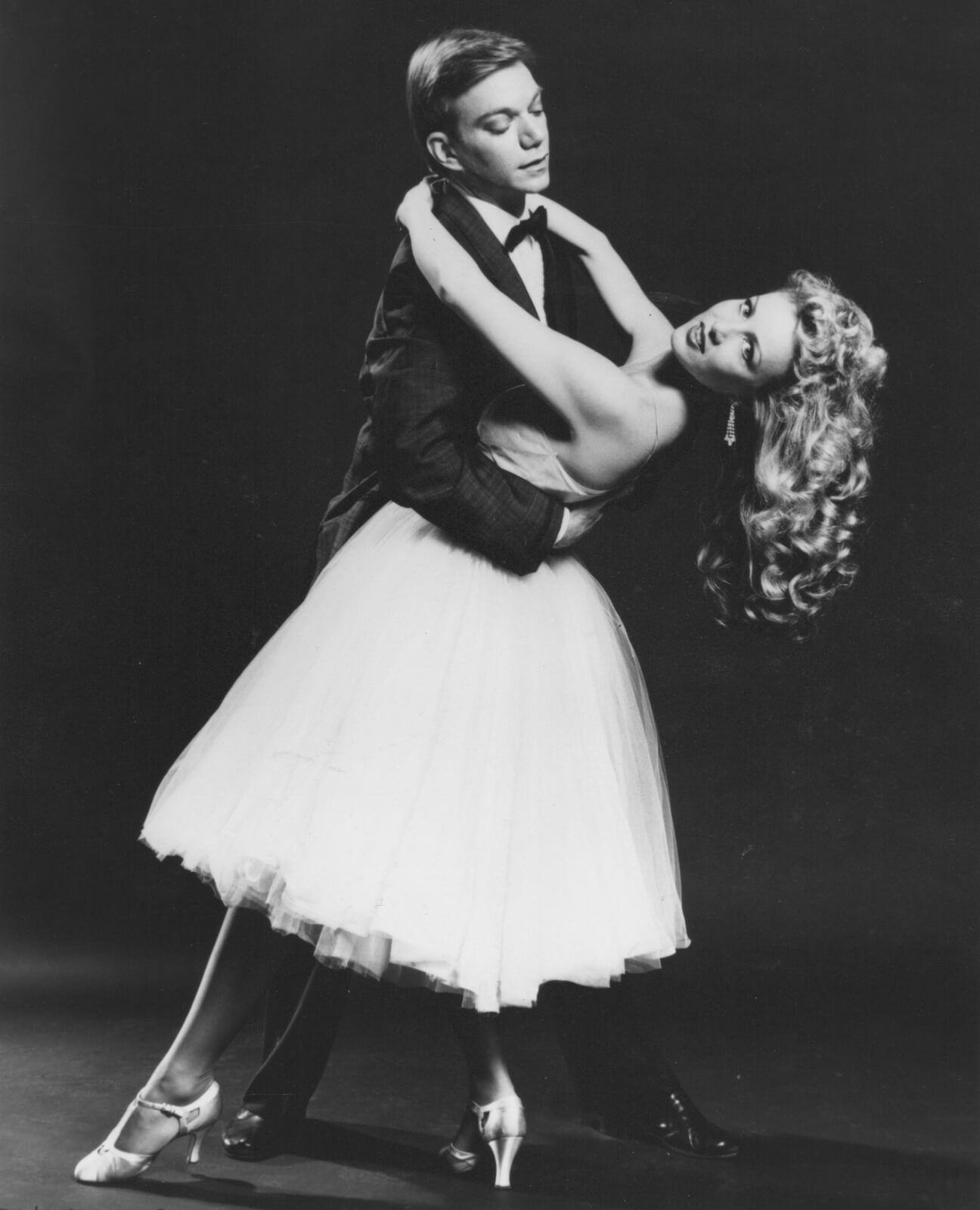 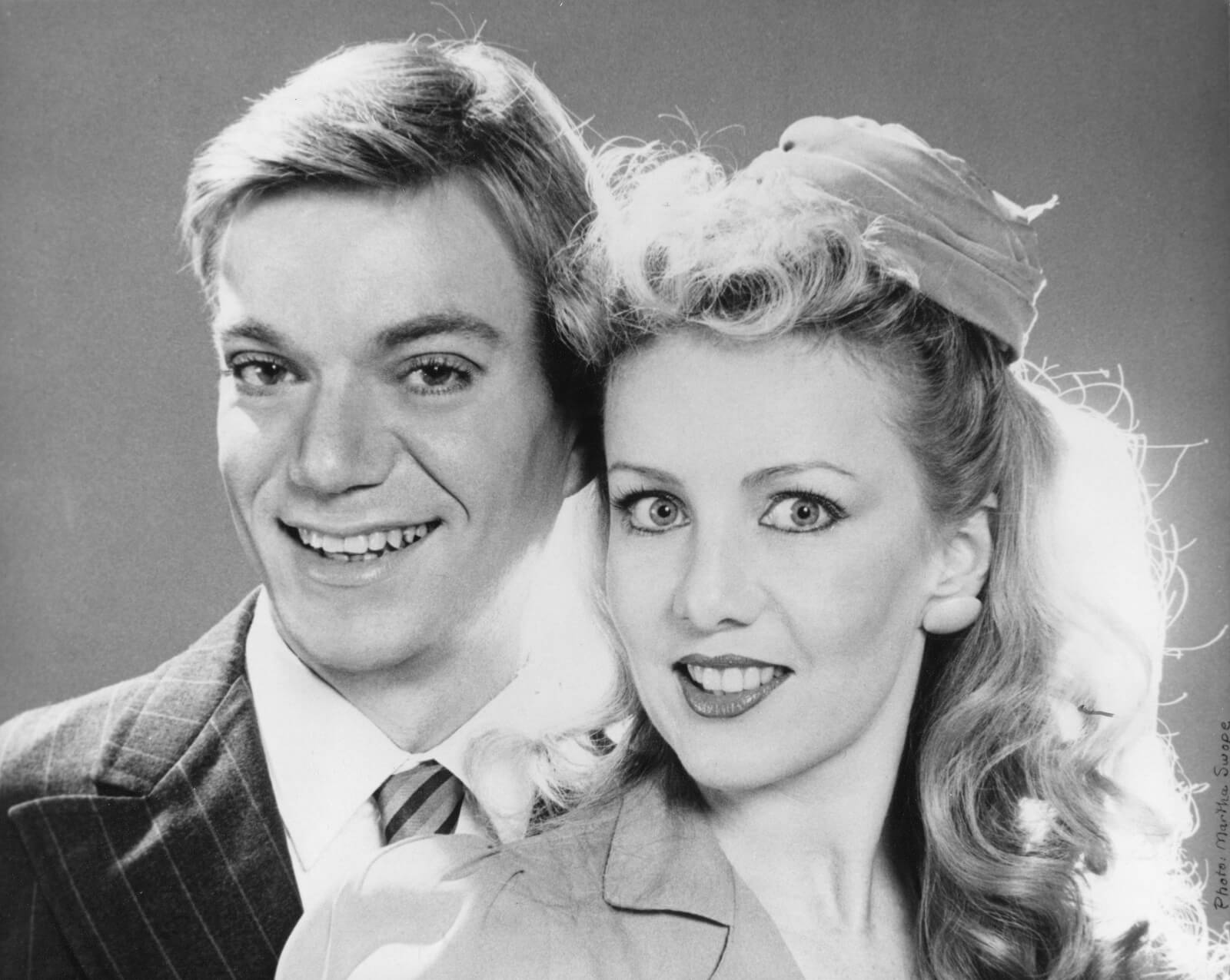 “This show dares to bring melody, wit and elegance to an MTV world.”
-
The Journal
“It is a musical valentine to MGM”
-
Dance News
"Entertainment you just don’t see anymore"
-
Dance Chronicle

Trading Places premiered at Equity Library Theater (Bruno Walter Auditorium) on November 21, 1983. It also premiered at Westside Arts Theatre on the 5th of December in the same year.