Happiness asks you to think about the most perfect memory in your lifetime.

As the show unfolds, we meet several irritable New Yorkers, each one in a hurry. There is the sound of crashing metal and suddenly they find themselves trapped in a subway car underground. A testy train conductor (Hunter Foster) appears and explains to them they have died and are now in a type of purgatory. He continues, telling them that unless they can go back through their life and pinpoint their happiest memory, they will remain in this eerie waystation for eternity. As each character chooses their most perfect moment, that memory is recreated for them in detail and their souls move on to re-experience the feeling of that happy moment forever, to live in this memory, forgetting everything else.

Writer John Weidman, lyricist Michale Korie, composer Scott Frankel, and I enjoyed a dynamic collaboration. I looked forward to each interesting meeting as profound ideas were tossed around about the various New Yorkers on the subway car – a bike messenger, a famous interior designer, a doorman, a shopgirl, a right-wing radio host, married medical interns, and an aggressive lawyer who pushed his way onto the train by accident.

Philosophizing about what their perfect moments might be was equally fascinating. John’s book and Michael’s lyrics were seamless. The witty dialogue and brilliant lyrics translated into authentic conversations between all the subway riders – each character had a clear structure. Although our premise had a supernatural aspect, the characters were as real and familiar to us as if we rode the subway with them every day.

Set designer Tom Lynch created a spectacular three-dimensional subway car that drove onto the stage, turned, then transformed to reveal its shiny metal skeleton. The audience could fully see inside the car, completely experiencing all the emotions the characters were experiencing. Tom collaborated strongly with lighting designer Donald Holder to illuminate different areas of the car to highlight the stories and add an other-worldly effect to each memory. Don also created a stunning effect for the moment the reenactment of each perfect memory finished – a brilliant light effect would sweep across the stage into the audience and the character would magically disappear, a literal depiction of the character “moving on”.

My favorite memory was the one told by Kevin the doorman, played by Fred Applegate. He recalls his perfect moment of being at the ballpark as a young boy with his father on the day Willie Mays made his famous catch in the 1954 World Series. Weidman wrote a riveting monologue that Michael and Scott crafted into a spectacular song titled “Best Seats in the Ballpark”. Scott’s soaring melody highlighted the excitement of the story and Fred Applegate gave a bravura performance. Just when Fred hits his highest note, the set swallows him and the lights sweep across the audience – he disappeared.

Hunter Foster gave a sensational performance as Stanley the train conductor. In life, he was a callous investment banker, now, without his own perfect moment, he is destined to ride the waystation forever. His song “Step Up the Ladder” is about his lust for material objects and his admission of walking over everyone to get ahead in the corporate world. Hunter was fearless, singing a difficult rhythmic patter song while executing actual ladder choreography – climbing a ladder, being carried on a ladder, spinning on a ladder, and riding an upright ladder as it falls to the stage floor. His argumentative banter with the aggressive lawyer Zack (Sebastian Arcelus), who has entered the subway car by mistake, is explosive as Zack insists there must be an escape clause. Sebastian’s glorious singing voice was heartbreaking as he begs for a second chance.

The talented ensemble of players in Happiness played several roles each as they wondrously made all the perfect moments come to life. William Ivey Long’s costumes helped place us in the exact year and season of each memory. Whether it was the 1960’s in Arlene’s (Joanna Gleason) memory of a club in the East Village or Miguel (Miguel Cervantes) climbing through his daughter’s bedroom window dressed like the Tooth Fairy or Gina’s (Jenny Powers) instant change from a business suit to a 1980’s summer dress on Coney Island, William’s clothes were as magical as the memories themselves.

Some characters on the subway had no problem choosing a favorite memory, others struggled, and a few claimed to have not had theirs yet. Phyllis Somerville played an elderly woman confined to a wheelchair. Her character knew immediately what her favorite moment was. As elements of her memory formed on the stage, she magically appears at a USO dance in the 1940’s, dancing to the song "Flibberty Jibbers” in the arms of her long lost love. It was the perfect memory to start with – it took us back in time, it was joyous, and it was about love.

Jenny Powers’s character Gina was interesting. In life, she was a daydreamer, a liar, someone who pretended she lived in a much more exotic, richer world. When given the chance to say her happiest memory, she continues pretending, making up story after story, hoping to spend eternity in the bliss of an imagined happy moment. Finally, with only Gina, Zack, and Stanley left in the subway car, Zack gives full attention to Gina and takes the time to coax her. Surprising herself, she comes upon a simple and happy time at Coney Island. The subway car spins like a carousel and she catches the gold ring – she disappears.

Stanley observes Zack’s selfless act. Zack pleads his case to Stanley as a lawyer would. He sings the song “Happiness”, beseeching Stanley to give him a second chance and expressing all he has learned from witnessing the happy moments of his fellow passengers. The combination of Scott’s driving melody, Michael’s heartbreaking and poignant lyrics, and the glorious voice of Sebastian magically force the subway doors to open and Zack escapes.

FOR TOO MANY YEARS I’VE LIVED WITH MY LIFE ON PAUSE
JUST ONCE BEFORE I DIE
I WANNA DANCE IN THE ARMS OF A GIRL I ADORE AND THEN KNOW HER NAME
TALK ABOUT SPORTS WITH MY DAD AND BE THERE FOR A FRIEND
DO CONEY ISLAND AND GO WITH MY SON TO A BASEBALL GAME
OR FALL IN LOVE AND HAVE A TRULY HAPPY ENDING.

LOOK AT ME WORLD WHO YOU SEE IS A ME NO ONE’S EVER KNOWN
I DON'T KNOW HOW BUT THE CHANGE IN ME NOW IS PROFOUND
SOMEWHERE BACK HOME IN NY IS A MOMENT THAT’S ALL MY OWN
ONE PERFECT ONE, THAT’S MINE ALONE
NOT TOO LATE TO FIND IT
I’M GONNA HAVE IT IN MY PRIME
HAPPINESS, HAPPINESS, HAPPINESS
THE SECOND TIME AROUND

The show inevitably triggers the audience’s own thoughts on memory and the meaning of death and how our memories shape us. Some nights I would see couples in the lobby after the show deep in discussion about choosing their perfect moment. People stopped me several times, excited to tell me that by the end of the show they had chosen their happiest memory.

If you had to, could you choose the happiest moment of your life? 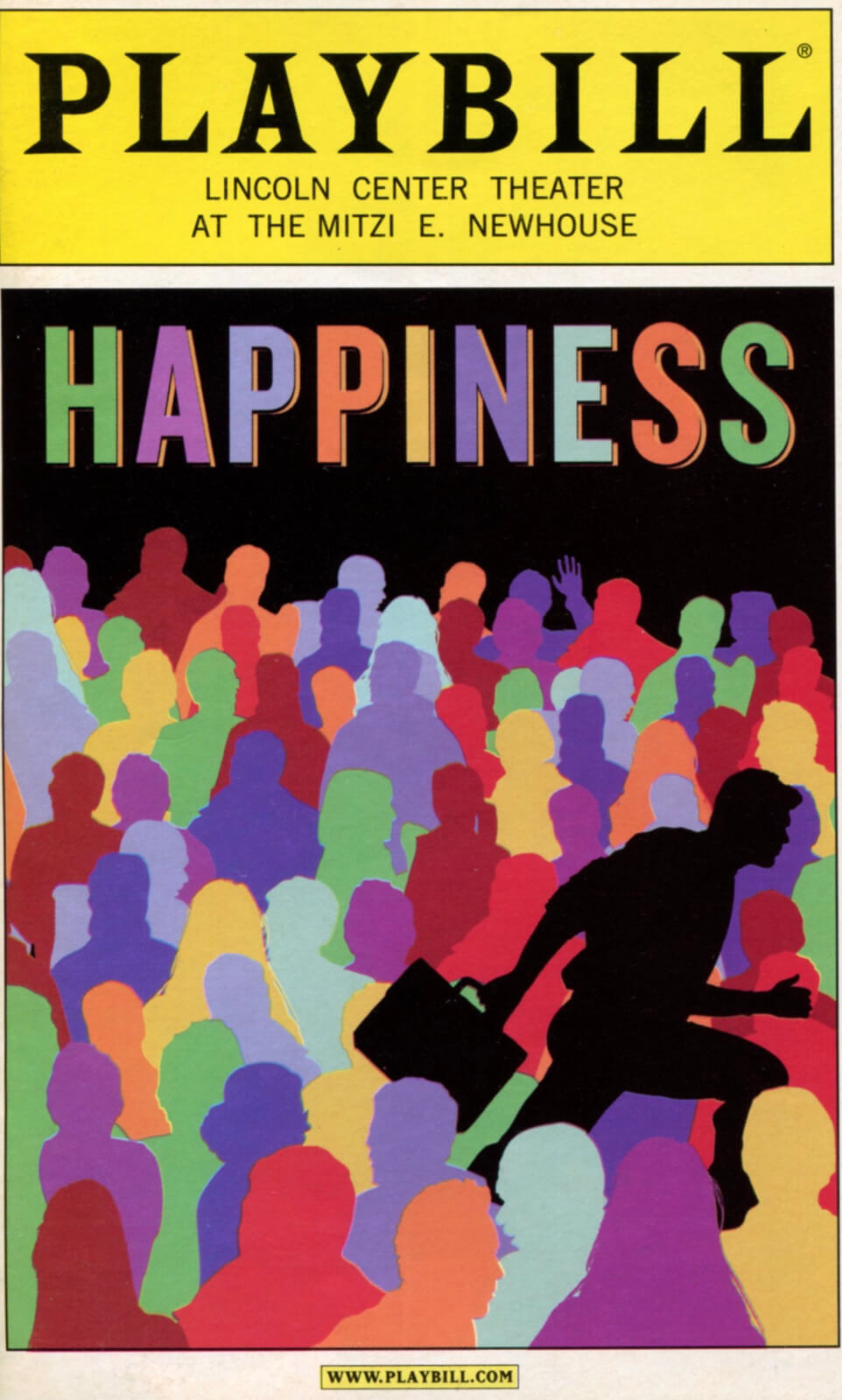 The official Playbill cover of Happiness. 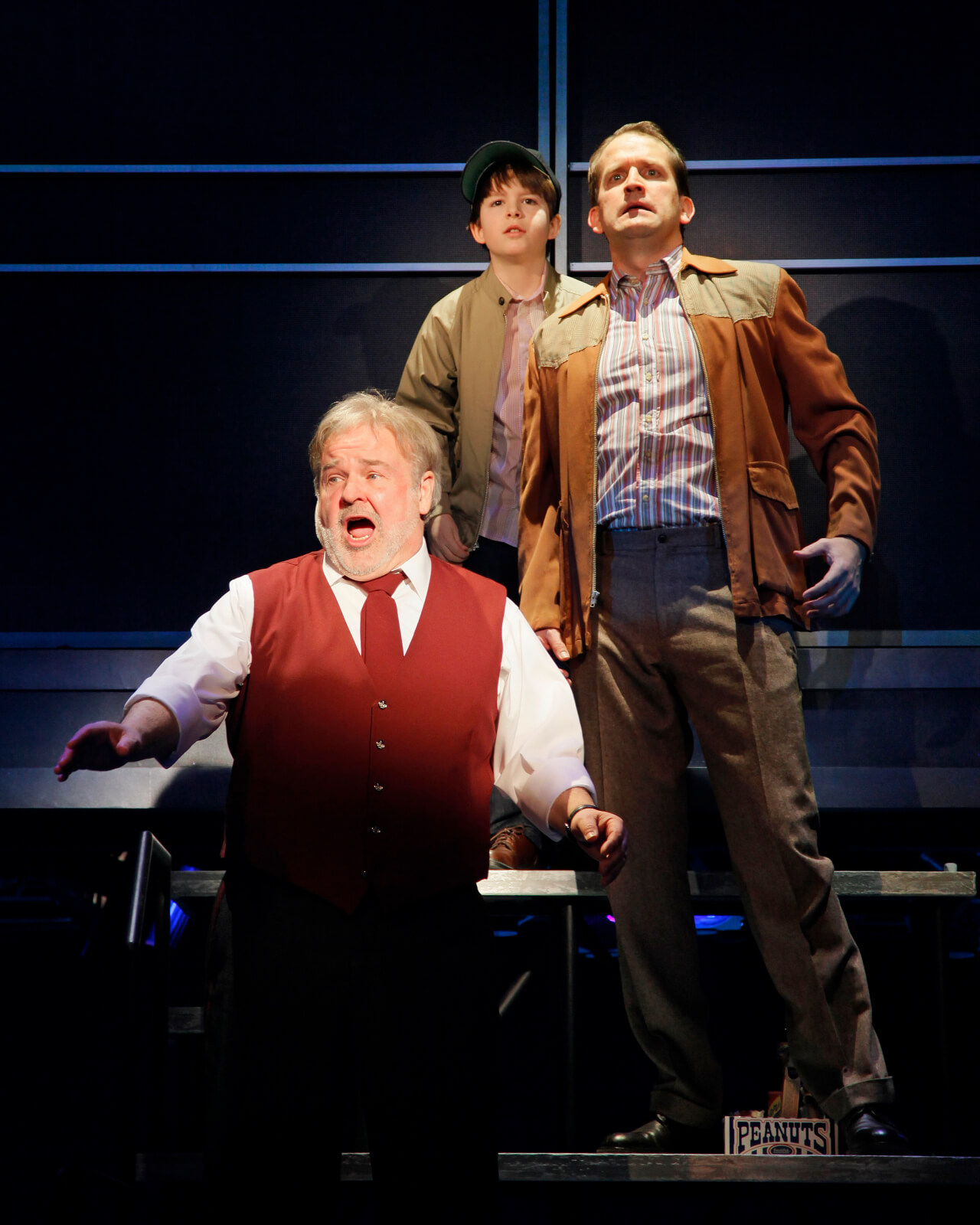 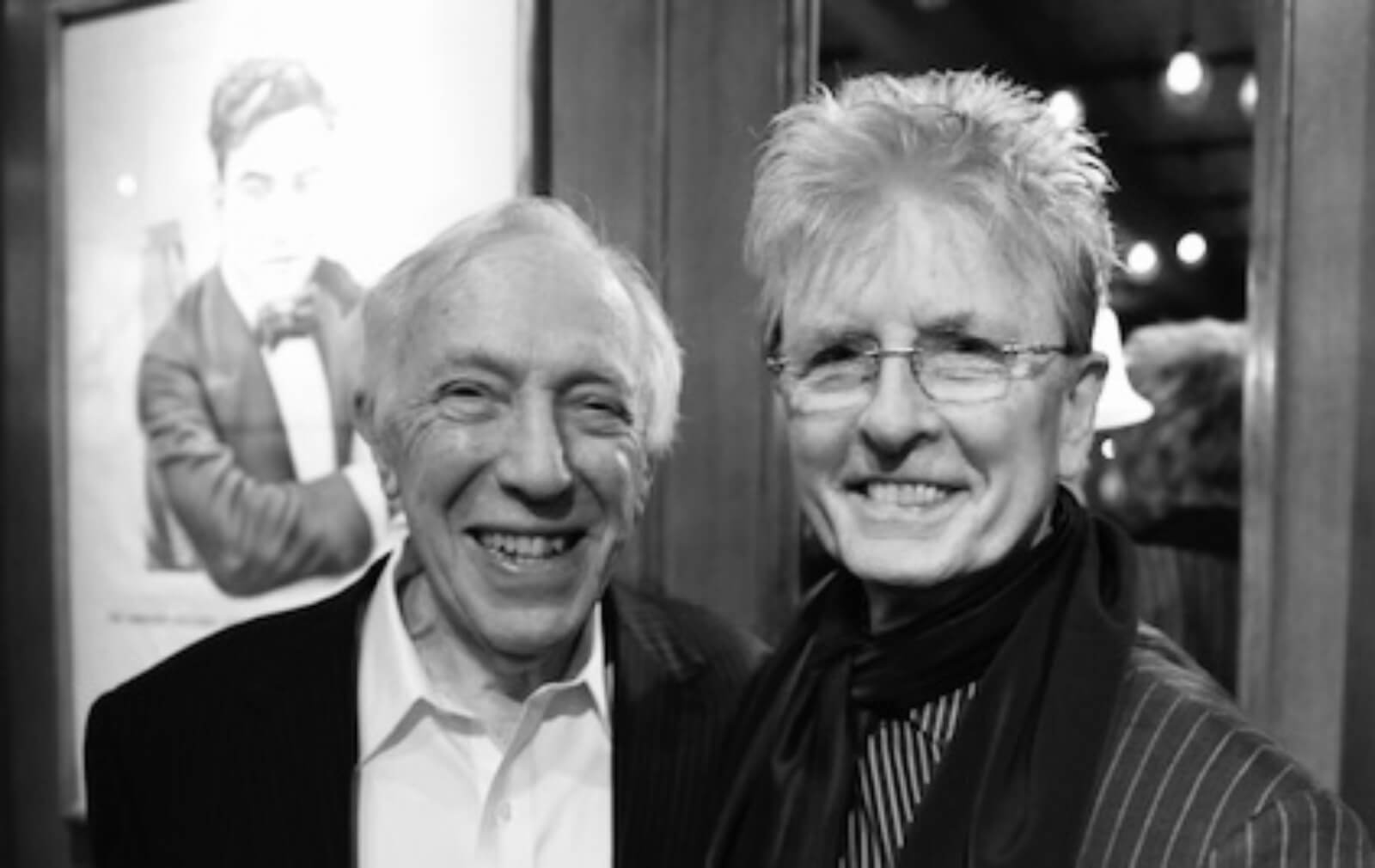 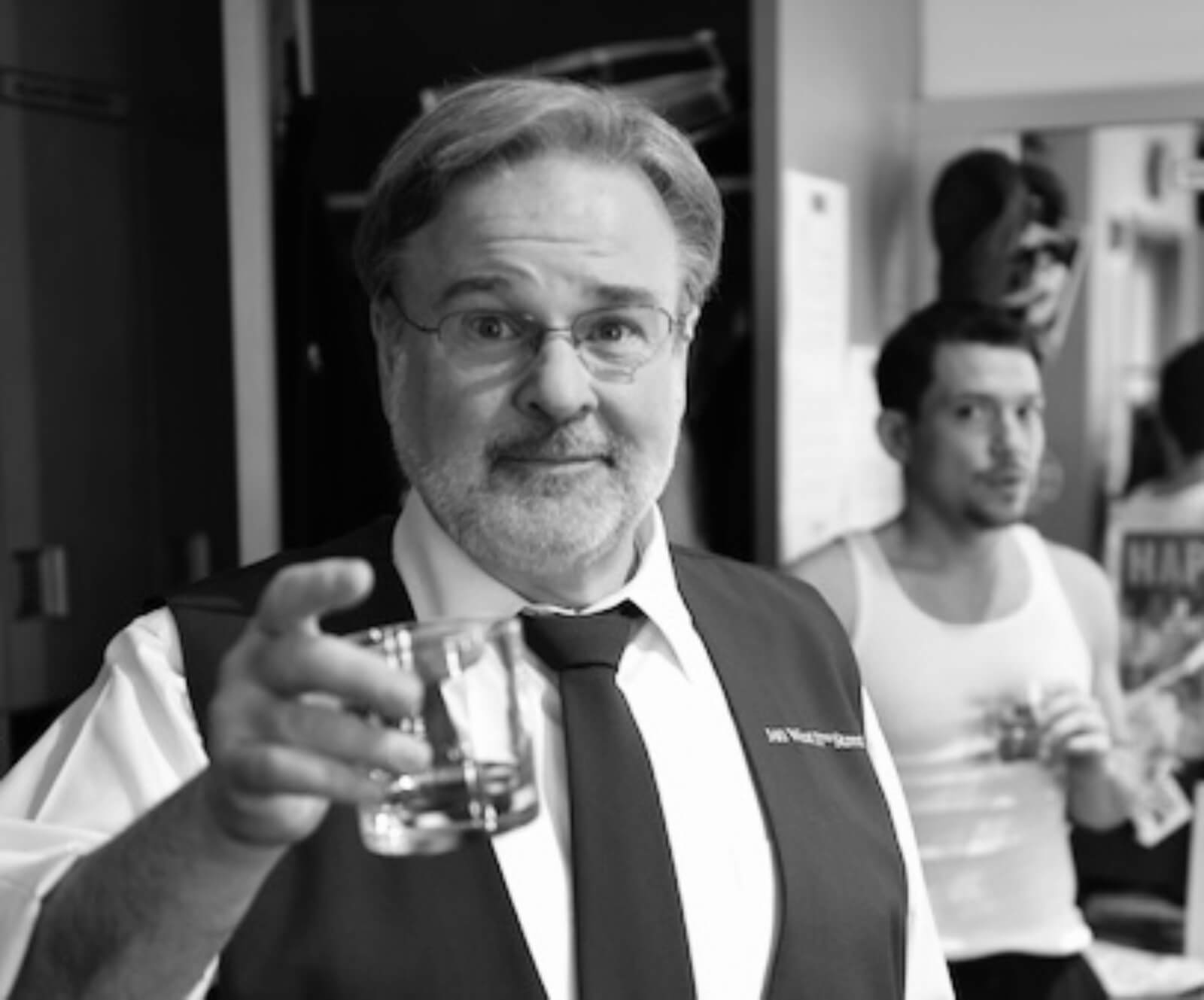 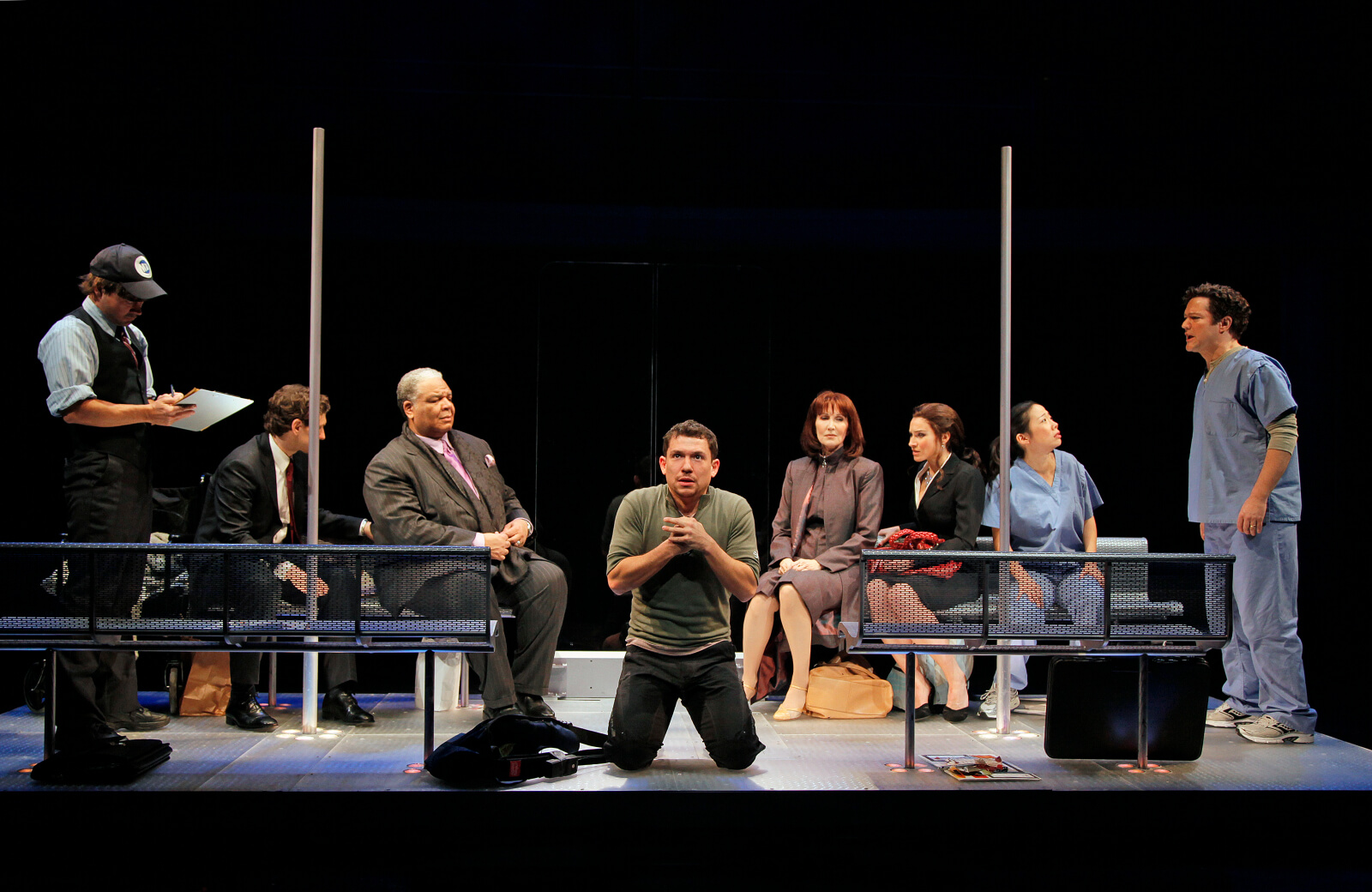 The cast of Happiness in a scene trapped on a subway car. 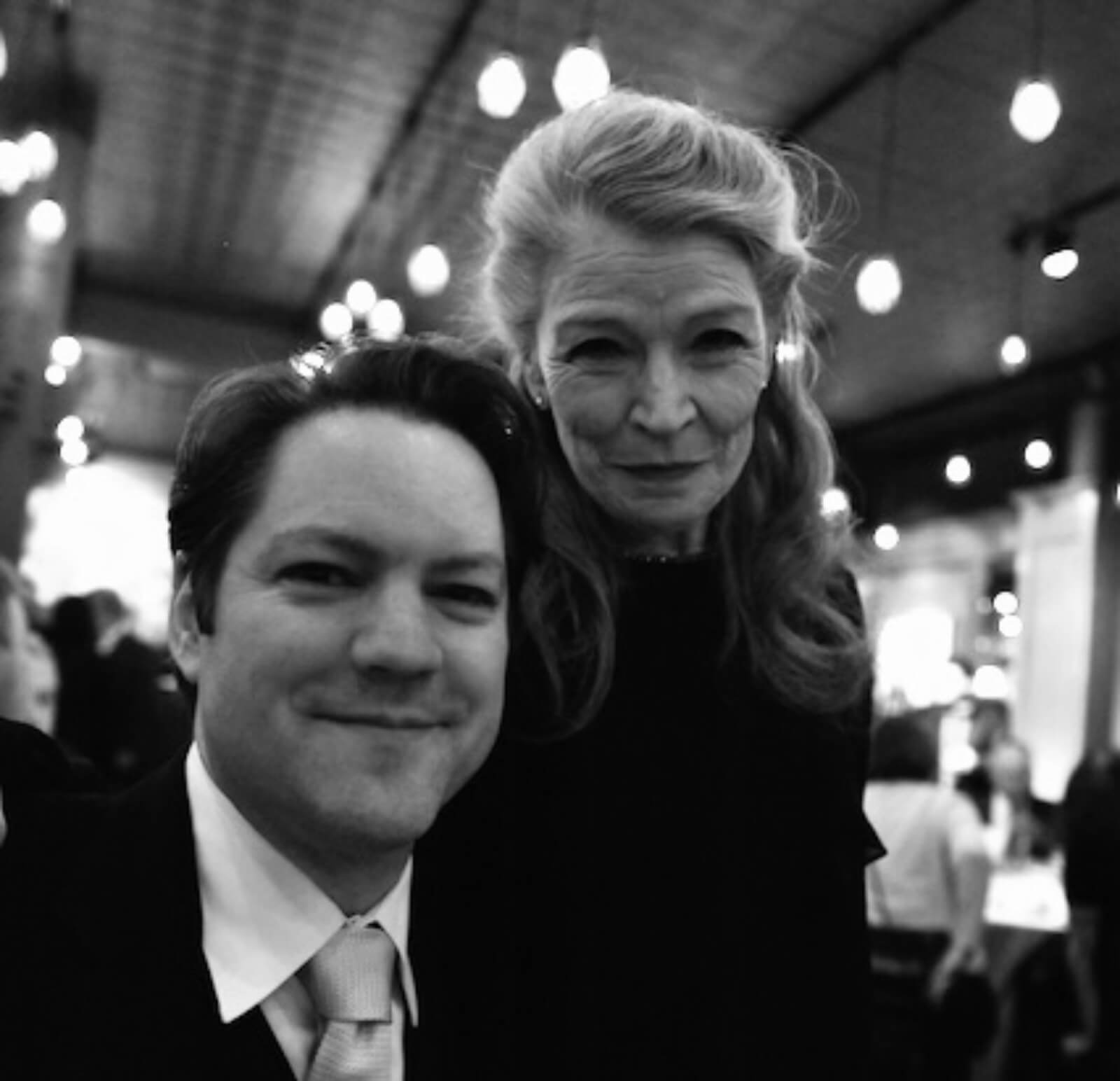 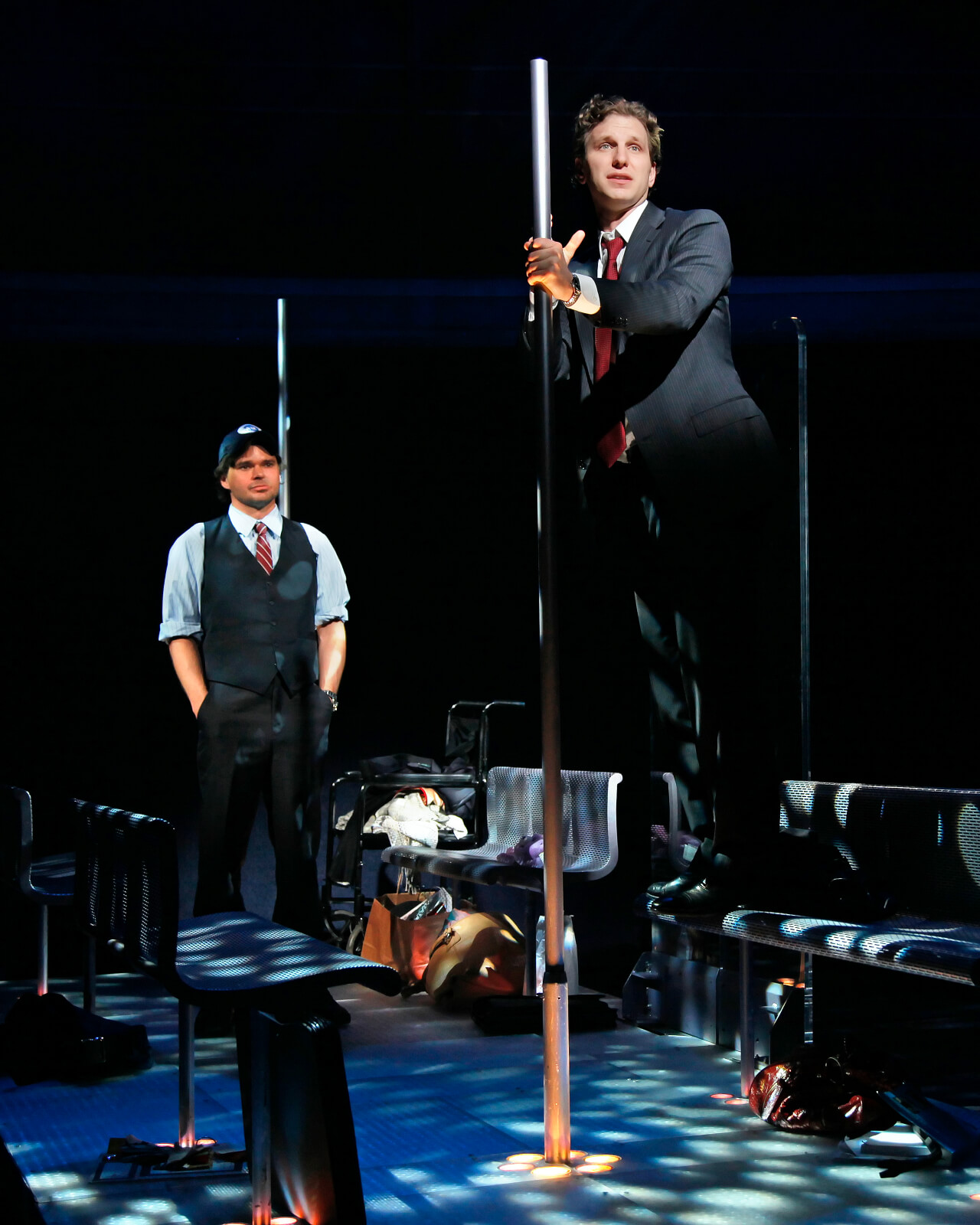 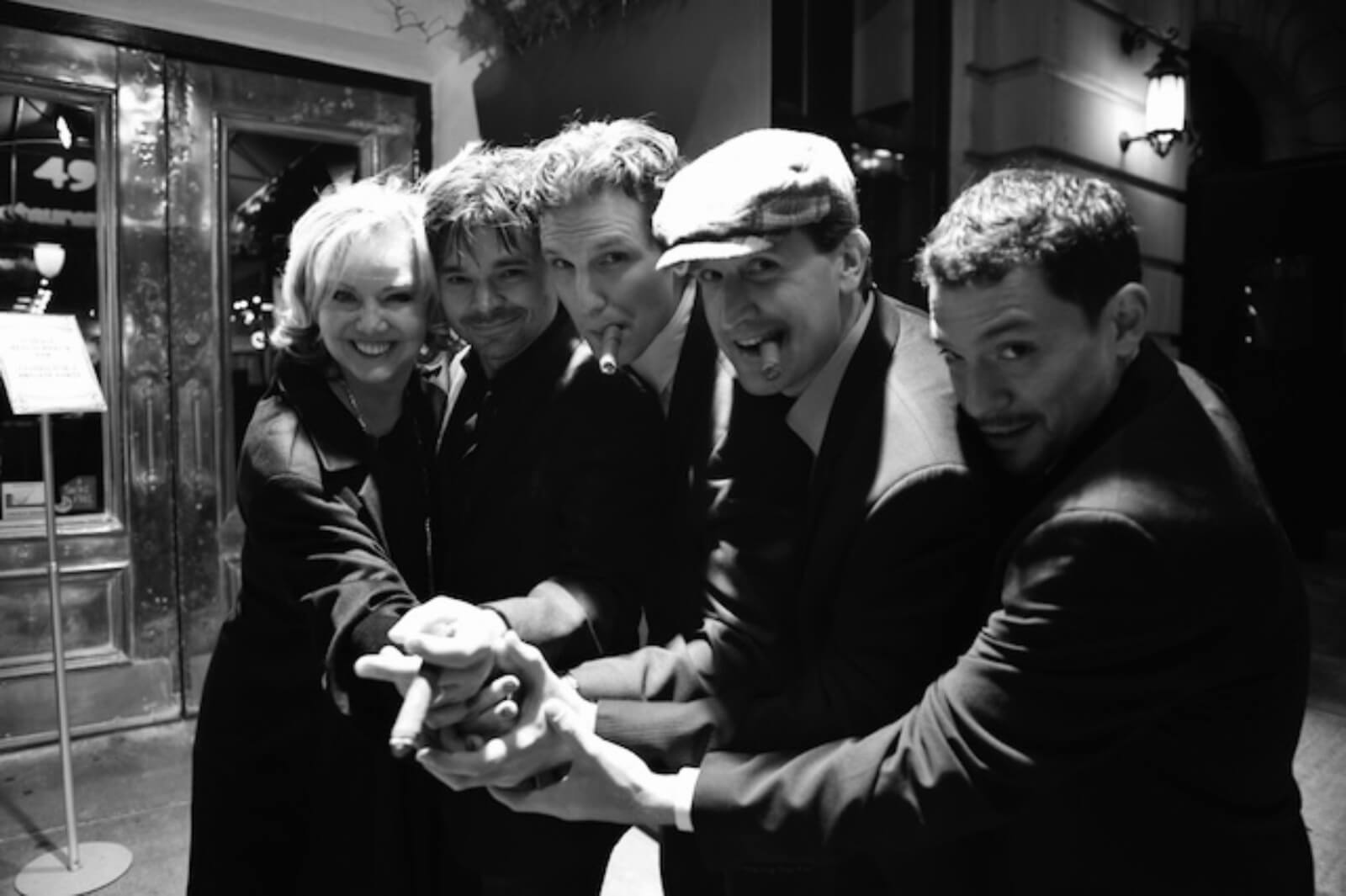 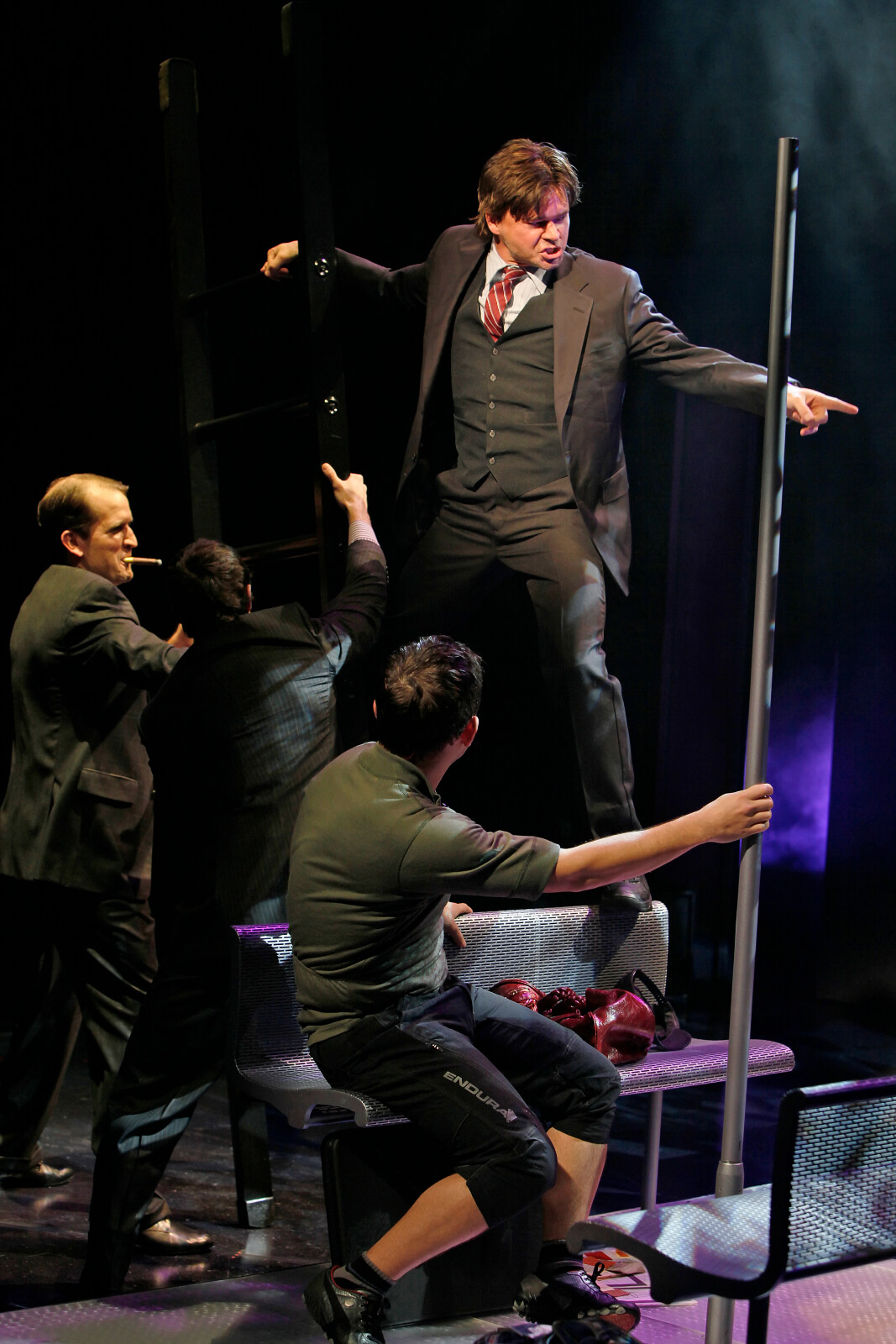 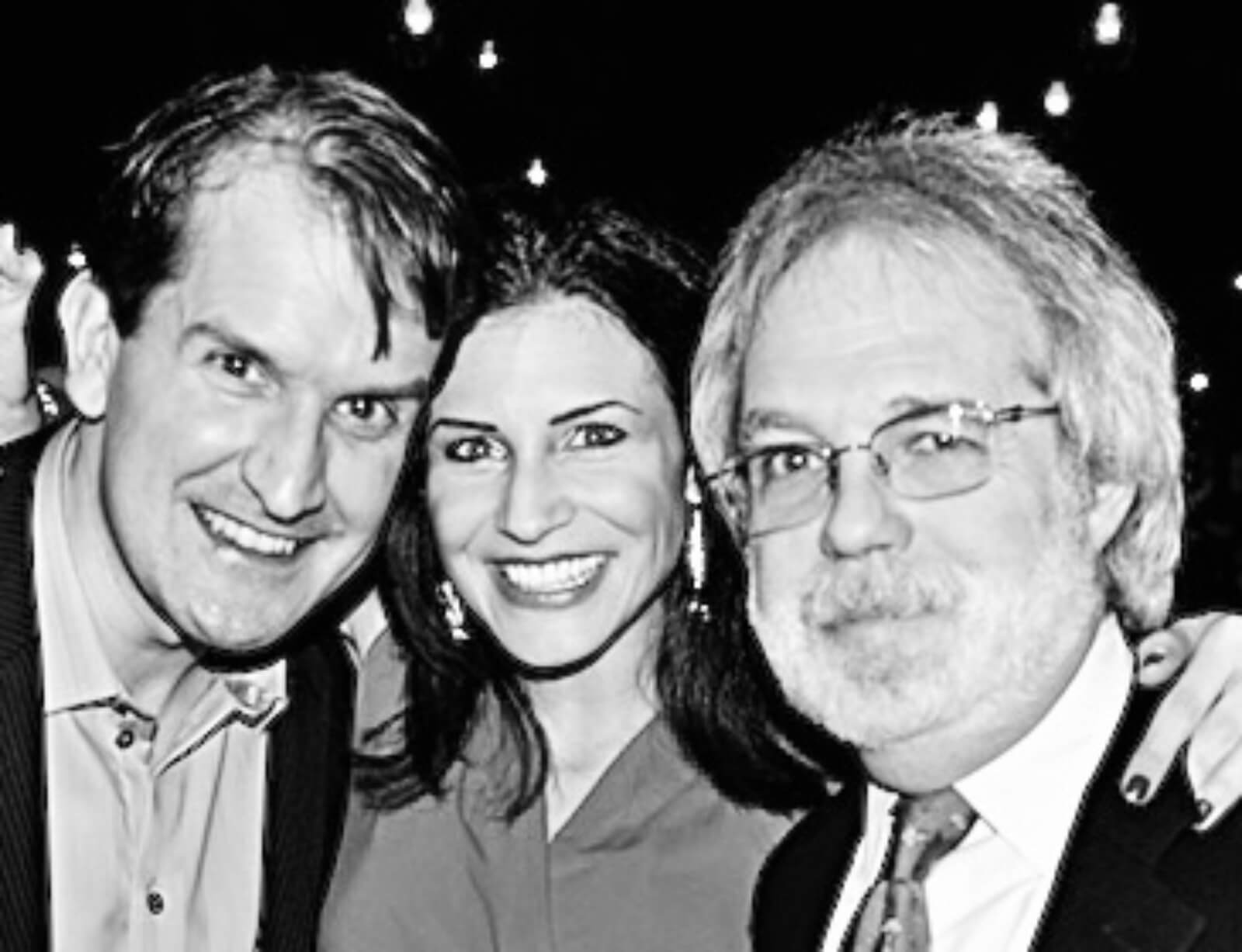 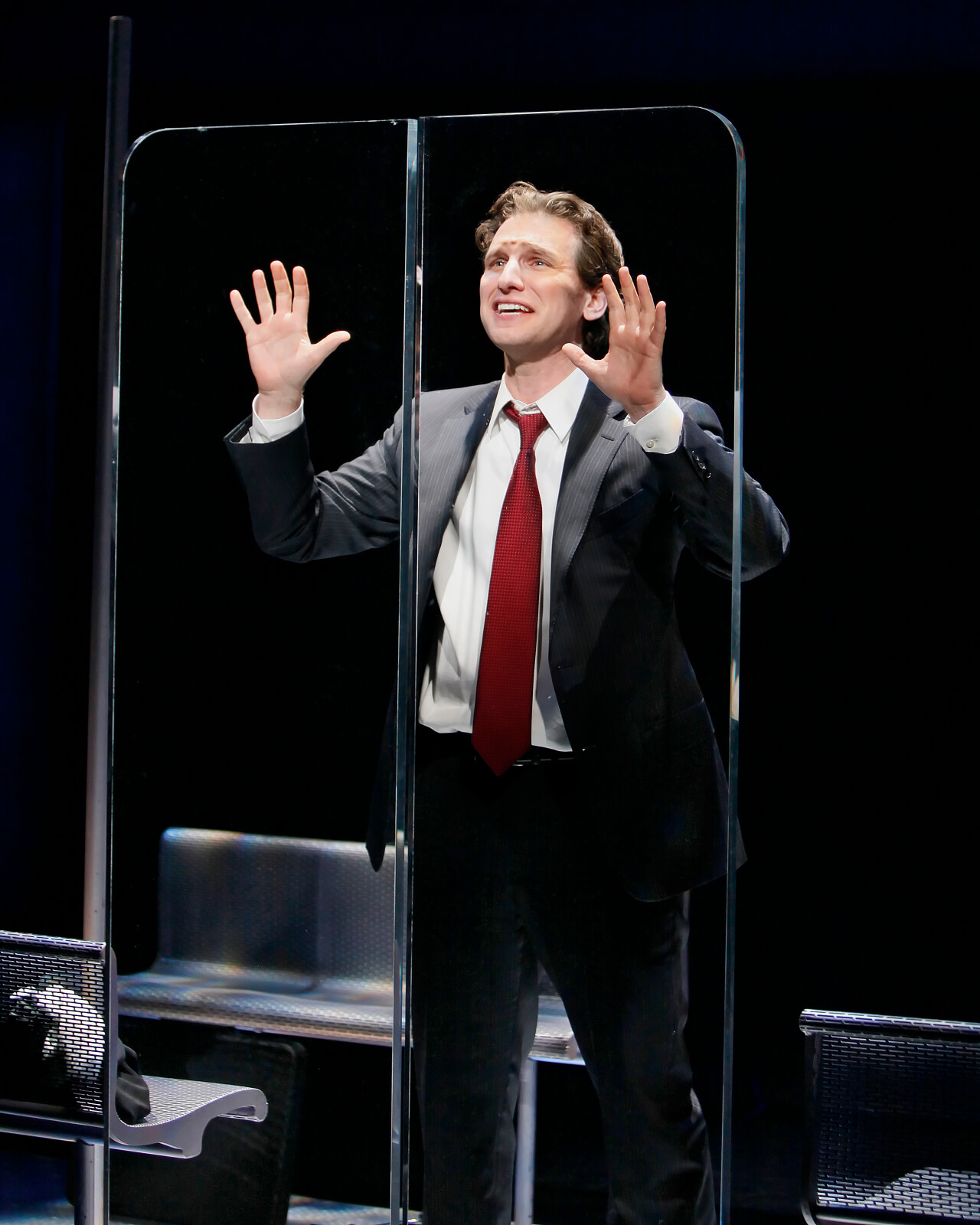 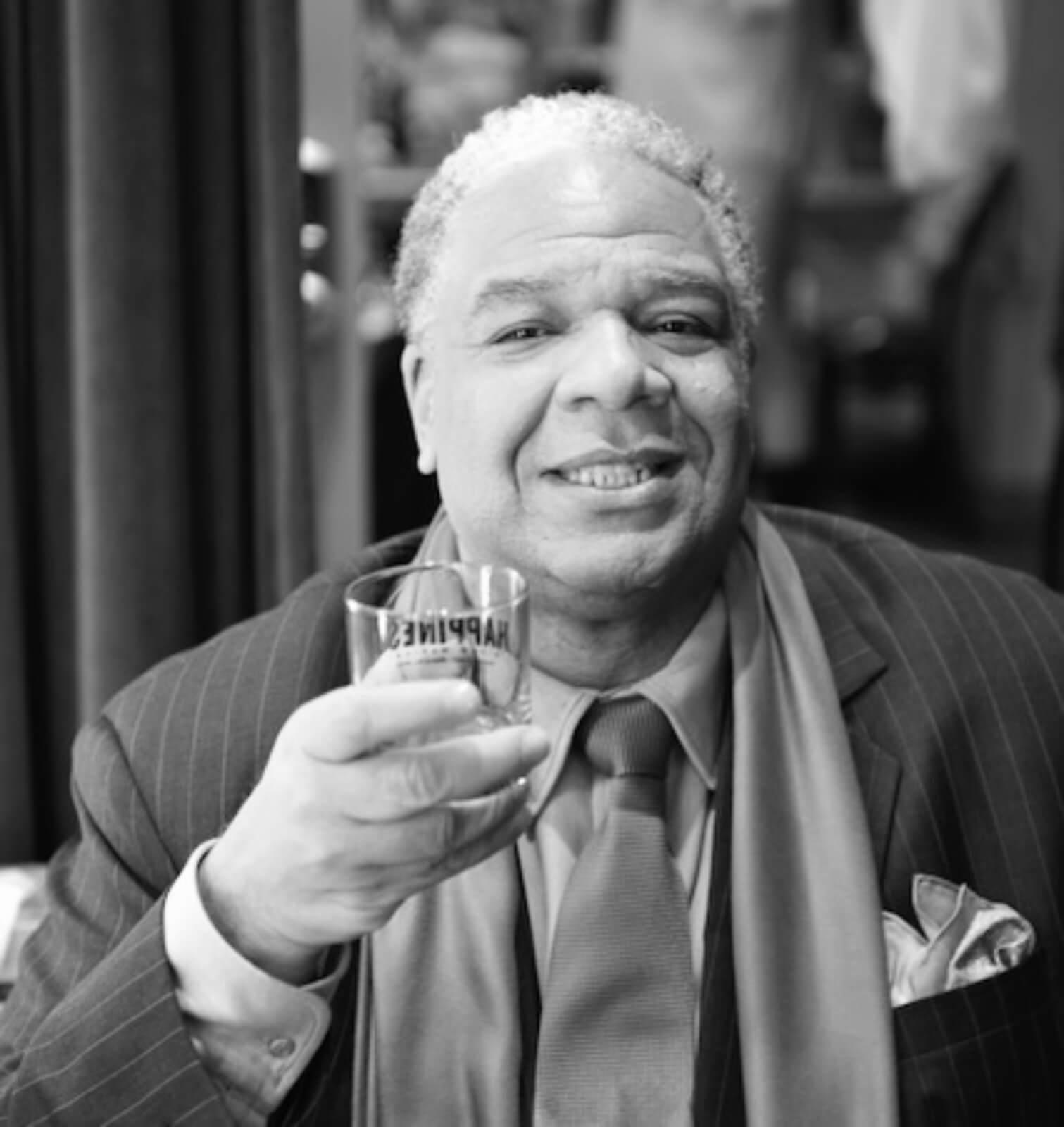 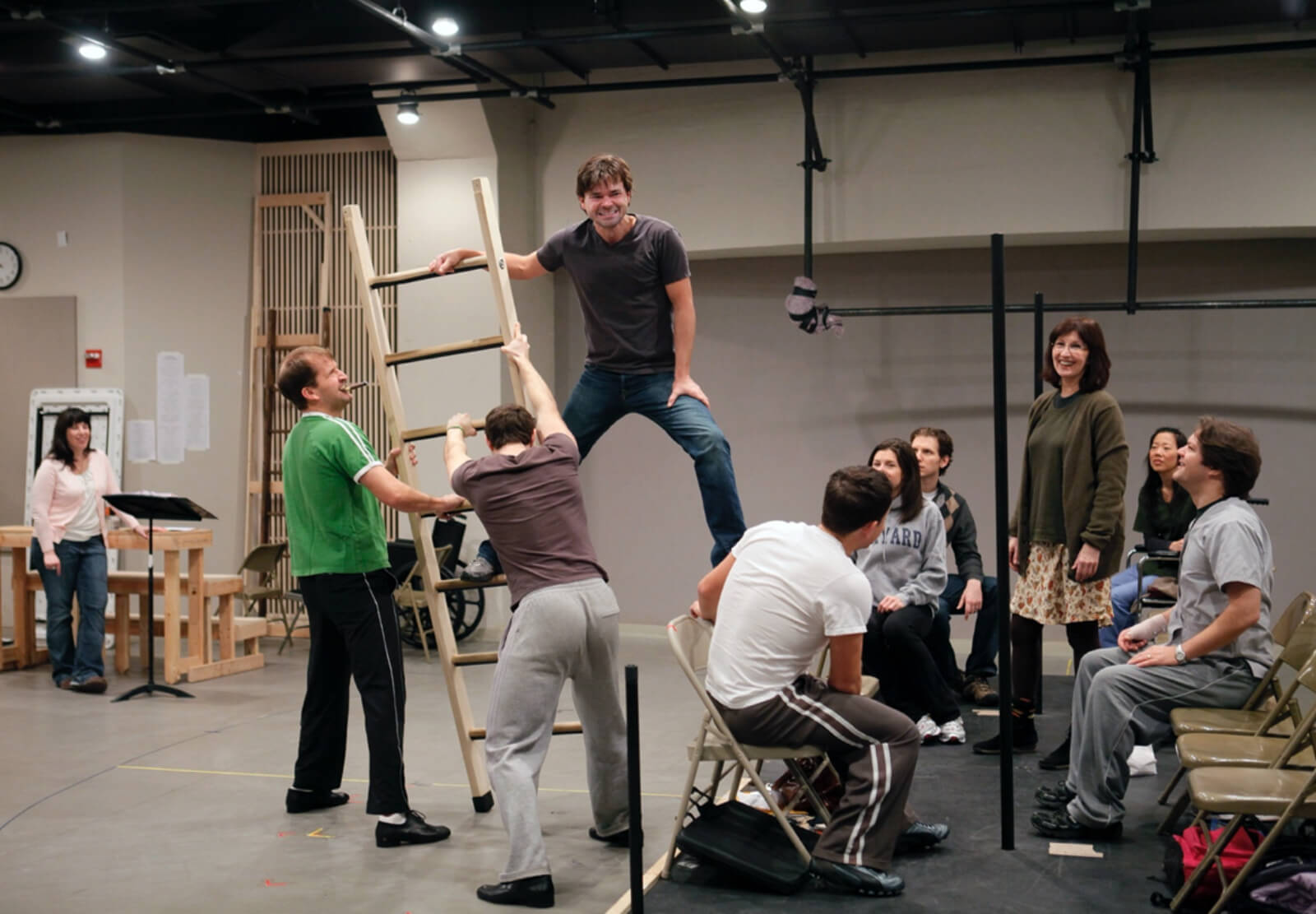 The company of Happiness rehearses a scene from the show. 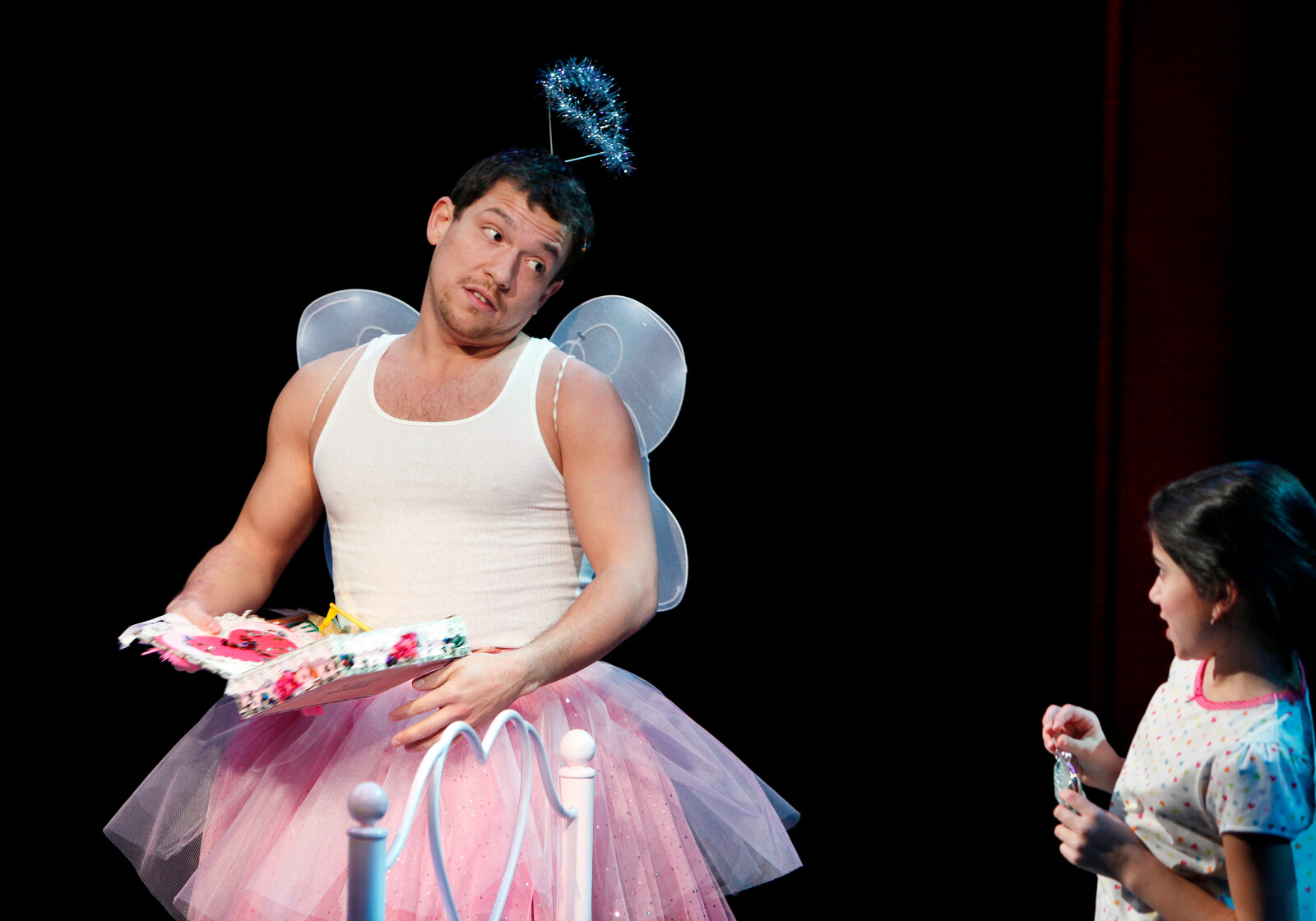 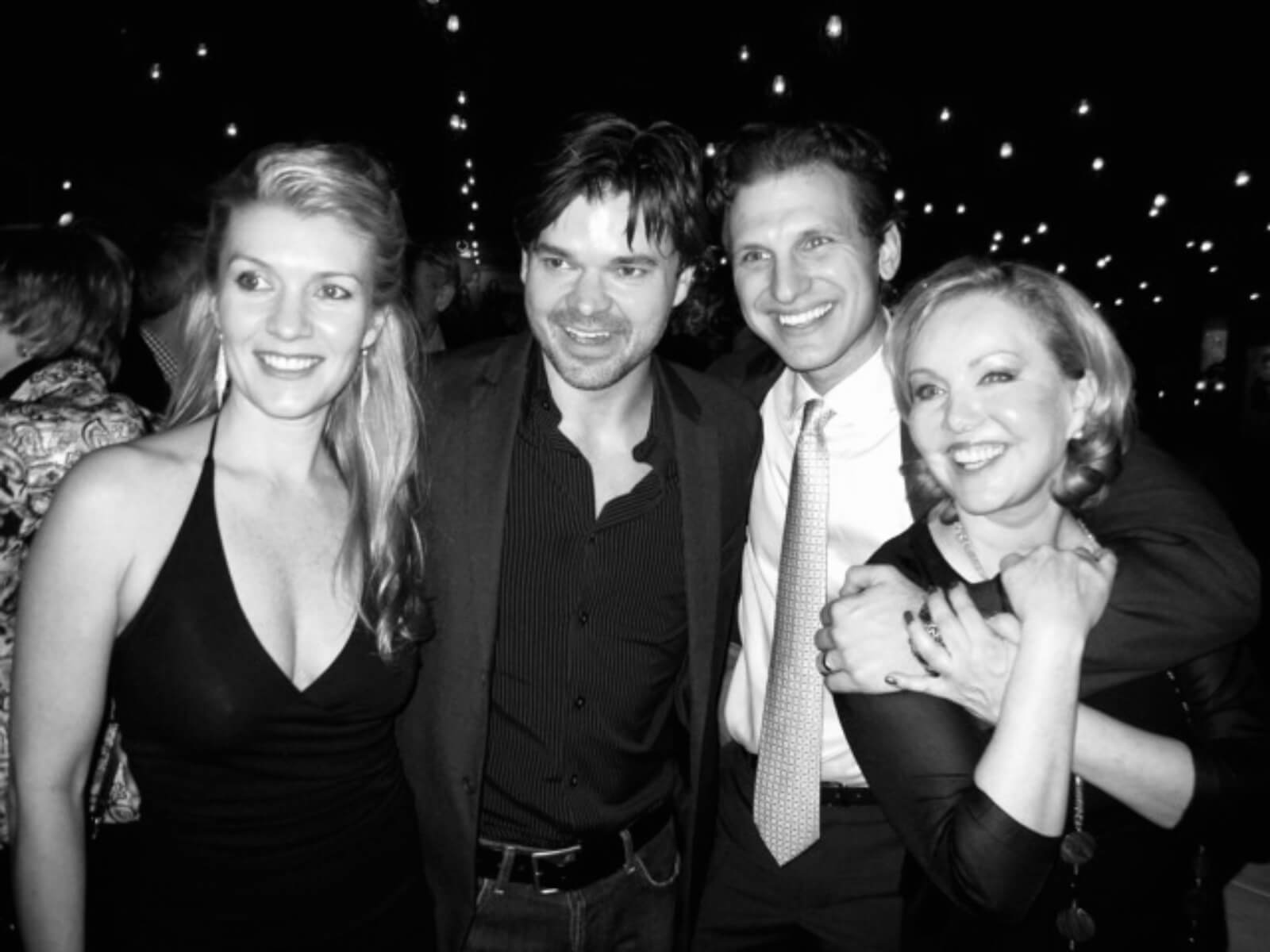 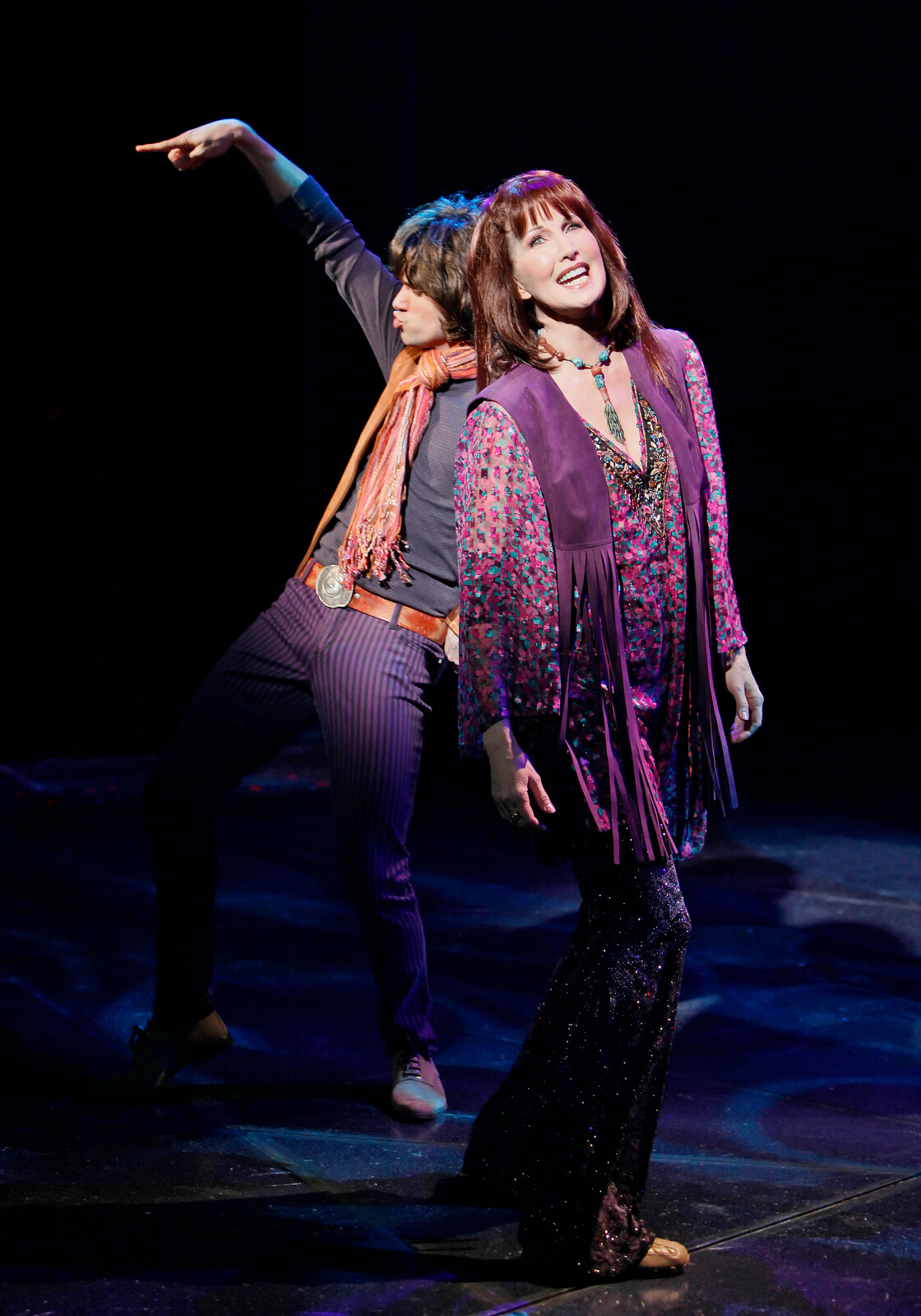 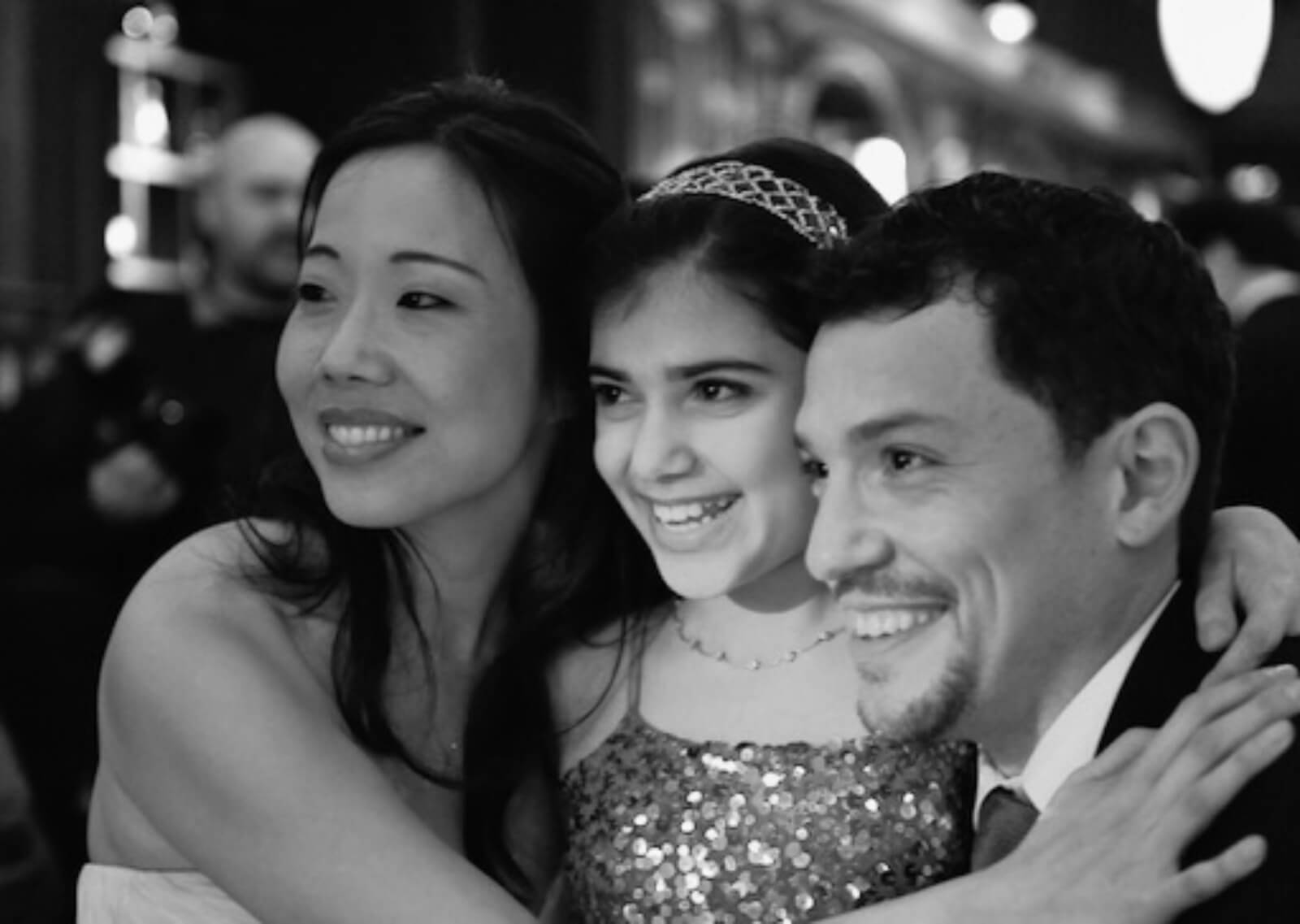